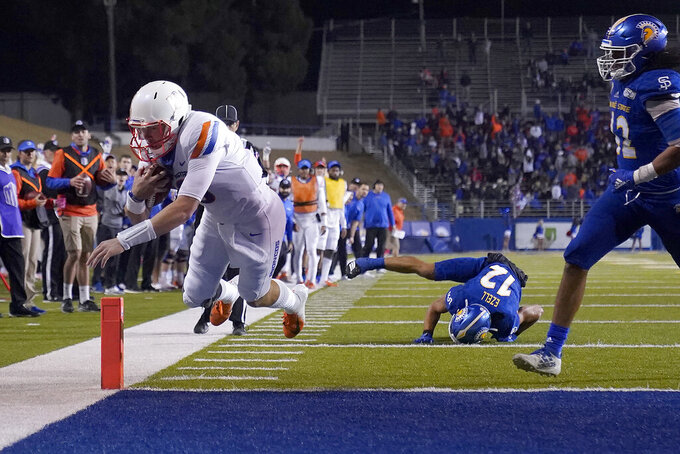 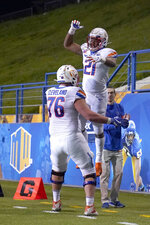 It's been nearly a month since No. 21 Boise State had a chance to play on its home field.

A lot has changed during those weekends away, most notably the Broncos no longer control their path to a New Year's Six bowl game as they return home to host Wyoming on Saturday night.

Boise State's loss to BYU on Oct. 19 changed all of that. The Broncos were No. 22 in the first College Football Playoff rankings, sitting behind both Cincinnati and Memphis in the race to be the highest ranked Group of Five team. That means no more stumbles — and maybe a little help along the way — if the Broncos want a shot at bigger and better bowl game.

"I don't think we've had the consistency in games at all positions that we've hoped for," Boise State coach Bryan Harsin said. "Not to take it that our guys haven't played hard. ... I'm not sure there is one guy on our team that would walk in here and say, 'I've had a complete game, I feel really good about it,' because that's just not our nature."

The Broncos (7-1, 4-0 Mountain West) got a major lift in last week's win over San Jose State with the return of freshman quarterback Hank Bachmeier after he missed the BYU loss with an injury. Bachmeier threw for only 213 yards and attempted just 17 passes in the win. But getting him back was a boost.

While the Broncos have their quarterback mostly healthy, Wyoming (6-2, 3-1) is dealing with losing its quarterback. Wyoming coach Craig Bohl announced starting quarterback Sean Chambers would miss the rest of the season after suffering a knee injury against Nevada. Chambers took a hit to his knee during a 2-yard touchdown run. Chambers returned briefly in the second quarter but missed the second half. Bohl said the injury is more severe than originally thought.

"We were hoping for the best, but once the doctors got in there, they found that they need to do some repair," Bohl said.

The Cowboys will turn to Tyler Vander Waal with Chambers out. Vander Waal has experience after starting nine games for Wyoming last season.

Boise State should have plenty of depth at running back this week with Robert Mahone expected to return after missing last week against San Jose State. Mahone's partnership with freshman George Holani has proved successful in a season when the Broncos are going with more of a committee in the backfield. The pair has a combined 978 yards rushing and 10 touchdown runs through eight games. Holani had 126 yards and four TDs last week against San Jose State.

After a sluggish stretch, Xazavian Valladay recorded 280 all-purpose yards in the win over Nevada. Valladay rushed for a career-high 206 yards and added another 74 yards receiving, including a 53-yard touchdown on Wyoming's first offensive play. It was the most all-purpose yards for a Wyoming player since Brian Hill had 302 against Nevada in 2016. In his past two games Valladay has carried the load for the Cowboys with 127 yards on 33 carries against New Mexico, followed by his performance against Nevada.

He'll be facing a Boise State run defense that is allowing just 116.3 yards per game to its opponents. Air Force is the only team to rush for more than 121 yards against the Broncos.

Wyoming linebacker Logan Wilson is one of the top defensive players in the Mountain West. He's also getting national recognition. Wilson was named as one of 12 semifinalists for the Butkus Award given to the nation's top linebacker. Wilson was the only player from a non-Power Five school named to the semifinal list.

For the season, Wilson has 62 total tackles and 6 ½ tackles for loss. He has 378 total tackles in his Wyoming career, ranking him fifth in school history.

Wyoming wasn't happy with the turf it played on in Boise during the 2017 season, both in a regular season loss to the Broncos and in the Famous Idaho Potato Bowl against Central Michigan. Bohl said he found the state of the turf that season to be poor and was happy to hear a new turf was installed this past offseason.

Unfortunately for Bohl, it's still blue.

"It's blue, but I'm just happy it's new turf," Bohl said. "I would rather have all our colleges be on green, but that's me. I'm a traditionalist."