No. 23 Virginia Tech looks to rebound against surprising BC 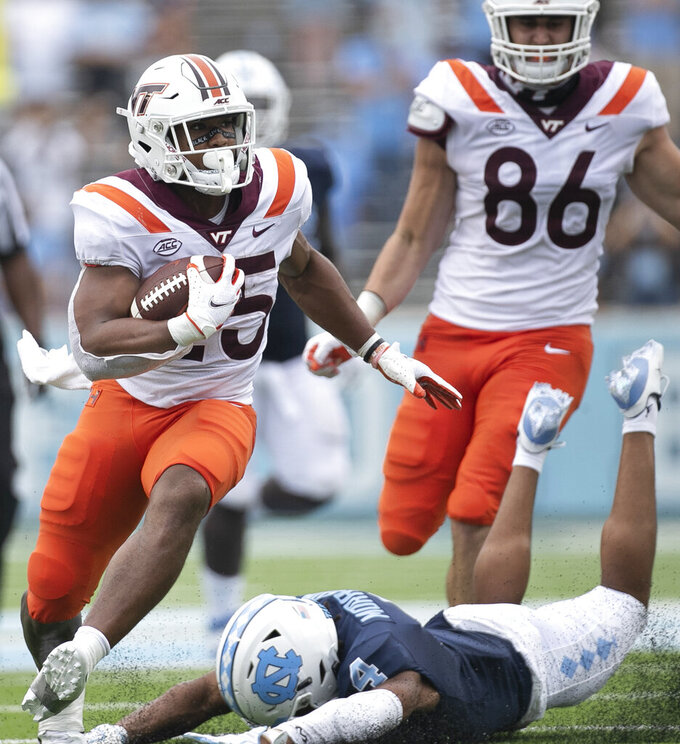 The Hokies are looking to bounce back from a defensive disaster at No. 5 North Carolina in which they gave up 399 rushing yards, 656 yards overall and lost 56-45. Boston College is trying to continue a surprising start under first-year coach Jeff Hafley.

Boston College quarterback Phil Jurkovec against Virginia Tech's pass defense. Hokies coach Justin Fuente said a secondary depleted by 15 players being unavailable because of coronavirus-related issues left them vulnerable, and exhausted. How many return, and their conditioning level after being sidelined, could play a big role in whether Jurkovec can continue his ACC-best average of throwing for nearly 300 yards and two TDs per game.

BC: WR Zay Flowers. He's not the Eagles' leading receiver, but their most productive with four touchdown grabs already among his 21 catches for 405 yards, seventh nationally.

Virginia Tech: RB Khalil Herbert. A graduate transfer from Kansas, he leads the ACC in rushing (149.7 ypg) and all-purpose yards (246.3) and already has an 83-yard kickoff return. He could become harder to focus on with dual-threat QB Hendon Hooker working his way back into shape after missing appreciable time in quarantine.

The Eagles have won two straight against the Hokies, including a 31-21 victory at Lane Stadium, where they are 5-7 since both joined the ACC in 2004. ... Jurkovec has three 300-yard games and his 1,181 yards and eight TDs through four games are the most by a BC quarterback in his first four games. ... Hafley, the co-defensive coordinator at Ohio State last season, saw his team force five turnovers in his first game, a 26-6 victory at Duke. ... The undermanned Hokies trailed 21-0 at UNC, but closed to within 42-37 before running out of steam. ... The Hokies rank third among Power Five teams with an average of 42.7 ppg.