No. 24 Utah paying tribute this season to the late Ty Jordan 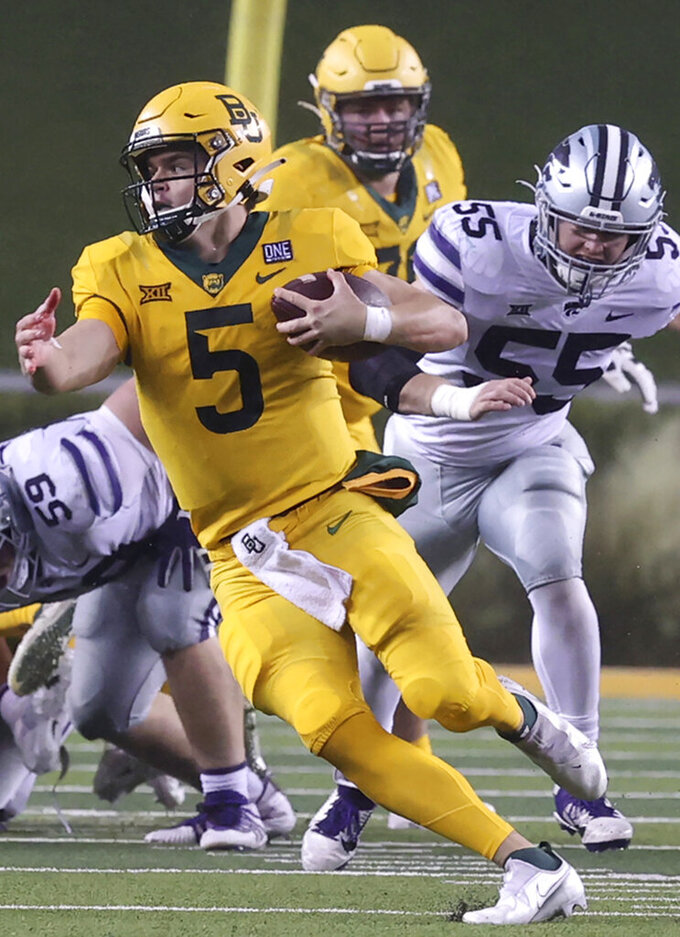 FILE - In this Nov. 28, 2020, file photo, Baylor quarterback Charlie Brewer, front, runs past Kansas State defenders for a first down in the first half of an NCAA college football game in Waco, Texas. Brewer will be quarterbacking the Utes after leaving Baylor. (Jerry Larson/Waco Tribune-Herald via AP, File)

The Utah Utes will take the field this season with a decal on their helmets similar to the one they wore during the spring game — “LLTJ.”

It's a tribute to the talented tailback who died last December at the age of 19 in what police concluded was an accidental shooting.

Jordan remains in their hearts as No. 24 Utah opens the season against Weber State on Thursday night at the expanded Rice-Eccles Stadium. He rushed for 597 yards and six TDs in a 2020 season shortened to five games, earning the Pac-12 freshman offensive player of the year award.

“There are several ways we’re going to honor Ty, and you’ll see them as the season unfolds," coach Kyle Whittingham said.

Here's another show of respect: Cornerback Aaron Lowe switched to wearing No. 22 as a tribute to Jordan, who was a high school teammate in Mesquite, Texas. Lowe was recently named the inaugural recipient of the Ty Jordan Memorial Scholarship.

"Ty made everyone around him better,” Lowe said on Utah's website. “He made me better. My friendship with Ty means a lot because he was always pushing me to be my best. He never let me settle for less. I want to make sure his legacy lives on through me.”

“Each have their strengths, and the flow of the game will dictate a lot of that,” Whittingham said. “But we know they’re all going to get playing time. They’ll all get carries unless something unforeseen happens. We’ll see what the production level is and go from there as far as moving forward with a depth chart.”

Weber State will be ready on a defense led by linebacker Conner Mortensen and safety Preston Smith, both of whom earned All-America honors during the Wildcats' spring season.

“I've kind of had a hard time getting a good bead on what’s coming out of their camp as to who their guy is and who they’re most happy with,” Weber State coach Jay Hill said about Utah's multiple tailback options. “No matter who’s back there at tailback, we’re gonna have to tackle them.”

The Utes will turn to Baylor transfer Charlie Brewer at quarterback after he beat out Cameron Rising in a close race. Brewer threw for 9,700 yards and 65 touchdowns in four seasons with the Bears before arriving in Salt Lake City. Rising showed plenty of promise last season before suffering a shoulder injury against USC.

“They’re both very well-respected, hard workers, they prepare the way you’re supposed to," Whittingham said. "It was really close, but ultimately for Charlie, the experience factor was probably the biggest reason.”

There soon could be a new single-game attendance record set at Rice-Eccles Stadium after the capacity was increased from 45,807 to 51,444. It was part of the south end zone expansion.

To prepare for the crowd noise, the Wildcats have been turning up the loudspeakers at practice.

“The thing's blasting when you're in the huddle and you can’t hear anything," Weber State running back Josh Davis said. "So I think that’s really gonna help going into the Utah game."

Hill recently brought in Gary Andersen as a voluntary staff member who will serve in an advisory role.

Andersen has been the head coach at Southern Utah, Utah State, Wisconsin and Oregon State. He also was a longtime assistant head coach/coordinator at Utah under Ron McBride, Urban Meyer and Whittingham.

“Gary is one of the best coaches in the country and we are lucky to have him with us,” Hill said.

Weber State was picked to win the Big Sky in the media and coaches polls. The Wildcats are also ranked sixth in the nation in the AFCA Coaches poll.

Whittingham is impressed with what Hill has done at Weber State, going 52-31. Hill played two seasons at Utah (1998-00) and also was an assistant coach with Utah for 13 seasons, including under Whittingham.

“Jay Hill has done a great job there,” Whittingham said.