No. 25 Michigan aims to keep momentum against N. Illinois 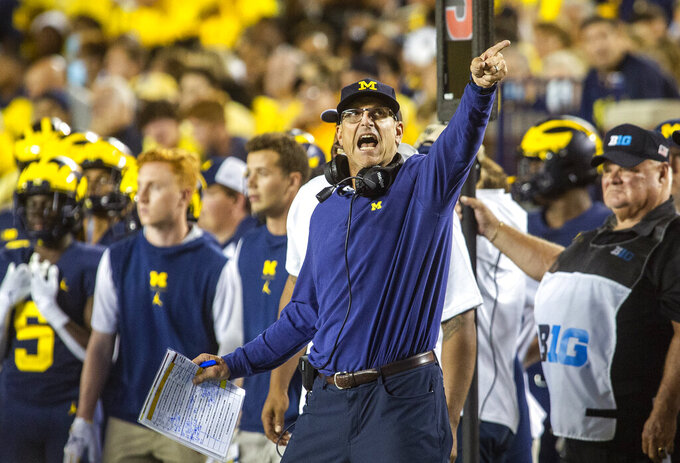 ANN ARBOR, Mich. (AP) — No. 25 Michigan has earned some momentum and has no plans to slow down against Northern Illinois.

The Wolverines (2-0) began the season unranked and with relatively low expectations from outside the program for Jim Harbaugh's seventh season. They have started to change the conversation with a strong start so far, routing Washington and Western Michigan with a run-heavy offense and swarming defense.

Michigan will have to do more than beat Northern Illinois (1-1) on Saturday and against Rutgers next week at home to win everyone over. But perhaps those games will prepare the Wolverines for the Oct. 2 test at No. 18 Wisconsin.

Entering the game at the Big House, Northern Illinois coach Thomas Hammock has been telling his players they have a great opportunity.

“Nobody gives you a chance, so there’s no pressure whatsoever,” Hammock said. "The only thing that you should feel is, `Can I go out there and play my best and get Michigan to respect and recognize who we are as a football program?′ That should be the excitement. Embrace it.”

Harbaugh, meanwhile, is telling anyone that will listen to respect the Huskies after they won at Georgia Tech and rallied from a 26-point deficit against Wyoming before coming up short.

“They really look like they got things going,” Harbaugh said. “They’re a team on the move, both offensively, defensively.”

Nothern Illinois QB Rocky Lombardi is set to play at Michigan Stadium for a third time.

The transfer led Michigan State to a 27-23 win against the Wolverines last year, throwing for a career-high 323 yards and three touchdowns. Lombardi also made his college debut at Michigan Stadium three years ago.

Lombardi tossed a touchdown pass to Tyrice Richie and passed for a 2-point conversion with 38 seconds left in the opener, lifting the Huskies to a win at Georgia Tech. He threw three interceptions in the loss to Wyoming, but Hammock noted two of those passes were deflected.

The Wolverines ran the ball 52 times, keeping it for 34-plus minutes against Washington last week. They easily won time of possession and Harbaugh noted that's not easy for a no-huddle team to do.

“Possession is nine-tenths of the law, so when you can have more than them, it’s a good thing,” Harbaugh said.

Michigan has had the luxury of leaning heavily on its run game with two dynamic running backs and an offensive line that has gelled. The Wolverines rank fourth in the nation with 339 yards rushing a game and rank fifth with 6.85 yards per carry

Blake Corum, the Big Ten offensive player of the week, has 282 yards rushing in two games to rank No. 8 in the country and Hassan Haskins has run for 225 yards.

“Coach Harbaugh went back to his roots — his Stanford roots," Hammock said.

Michigan's defense seems to be improved under first-year coordinator Mike Macdonald. Defensive end Aidan Hutchinson, linebacker Josh Ross and defensive back Daxton Hill have helped the unit combine for nine tackles for losses and break up 14 passes, the highest total through two games in 12 years.

CHANGE IN THE AIR

Michigan has had Caden Kolesar returning punts since Ronnie Bell had a season-ending knee injury during the opener. Kolesar won the fill-in job because of his ability to field punts cleanly, but he appears to be going back to another role on the unit.

“He’s so valuable at the other positions at punt return,” Harbaugh said. “We really need somebody else to step up. A.J. (Henning) is really close.”