No. 3 Buckeyes look to keep rolling at No. 18 Penn State 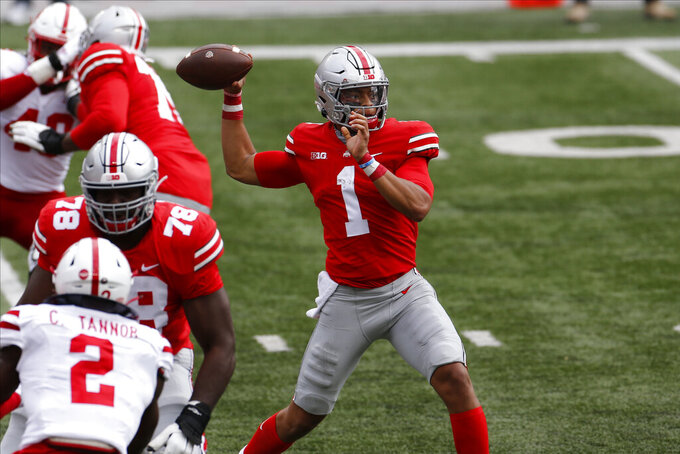 Here are things to watch during the second week of play in the Big Ten Conference:

The Buckeyes are coming off a 35-point win over Nebraska and are a double-digit road favorite against the Nittany Lions. Justin Fields, superb in his season debut, can continue building his Heisman Trophy credentials in prime time. The main question for the Buckeyes is the availability of wide receiver Chris Olave, who left last week's game in the second half with an upper body injury. Penn State is smarting after losing to Indiana in overtime and hasn't opened Big Ten play 0-2 since 2010. The Nittany Lions got another blow to their running back corps when Noah Cain was ruled out for the season because of an undisclosed injury.

Iowa offense vs. Northwestern defense. QB Spencer Petras was solid in the opener against Purdue, but the Hawkeyes had a couple turnovers and some pre-snap penalties that need to get cleaned up. Northwestern's defense has only two returning starters because of opt-outs. The Wildcats shut down Maryland and figure to get a tougher test on the road this week. Northwestern's Paddy Fisher is one of the best linebackers in the country.

The team that runs the ball best has won the Michigan State-Michigan game in 45 of the last 50 meetings. The Wolverines have to like their chances at home. They ran for 256 yards on the road against Minnesota last week; Michigan State managed 50 on the ground at home against Rutgers and averaged just 1.28 per carry.

There are signs of life in the Rutgers program. Following a win at Michigan State, the Scarlet Knights are a 10-point underdog to Indiana. Rutgers has played Indiana tough at home, and Greg Schiano has brought energy in his return to Piscataway. If the Hoosiers are still celebrating their overtime win over Penn State, Rutgers might make this a game.

Purdue receiver David Bell was held to five catches for 18 yards against Illinois last year. Look for more production from him against the Illini on Saturday. He had 13 catches for 121 yards and three touchdowns against Iowa last week.