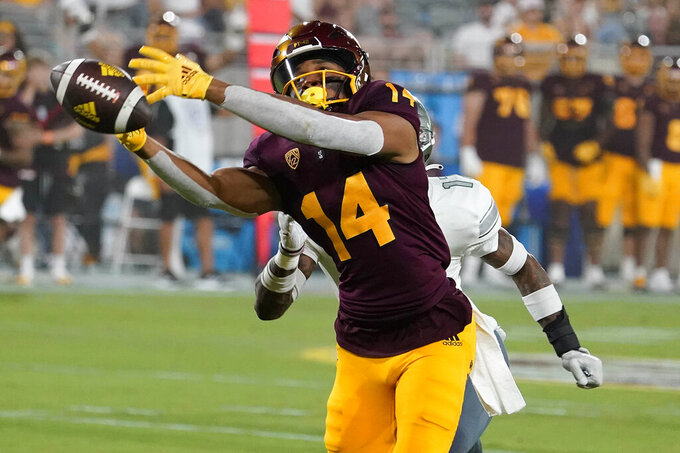 Arizona State's Zeek Freeman (14) has the ball slip through his fingertips against Eastern Michigan's Mark Lee Jr. (17) during the second half of an NCAA college football game Saturday, Sept. 17, 2022, in Tempe, Ariz. (AP Photo/Darryl Webb)

Line: Michigan by 17, according to FanDuel Sportsbook.

If Michigan wants to win back-to-back Big Ten titles for the first time since 2003-04, they will need to take care of business against the best team they’ve faced this season. The Terrapins are a step above Colorado State, Hawaii and Connecticut – the teams Michigan outscored 166-17 in an easy non-conference schedule. An upset would be huge for the Terrapins and coach Mike Locksley.

Blake Corum against the Maryland run defense. Corum is averaging 6.9 yards per carry and has scored seven touchdowns despite being rested for large portions of Michigan’s lopsided victories. Things should be a little tougher against a Maryland team that has only allowed one rushing touchdown and held opponents to 3.3 yards per carry.

Maryland: RB Roman Hemby. The Terrapins were expected to have a prolific passing game this year, and now Hemby has given them a big-play threat on the ground. He rushed for 151 yards in the win over SMU last weekend.

Michigan used eight quarterbacks in last weekend’s 59-0 win over Connecticut, with seven of them attempting a pass. According to SportsRadar, those were both the most by a college team since at least 2000. … The Terrapins haven’t beaten a top-five team since knocking off No. 5 Florida State in 2004, and they haven’t done it on the road since beating No. 2 Michigan State in 1950. … Maryland is 3-0 for the second straight season. The last time they did it twice in a row was in 1979-80.