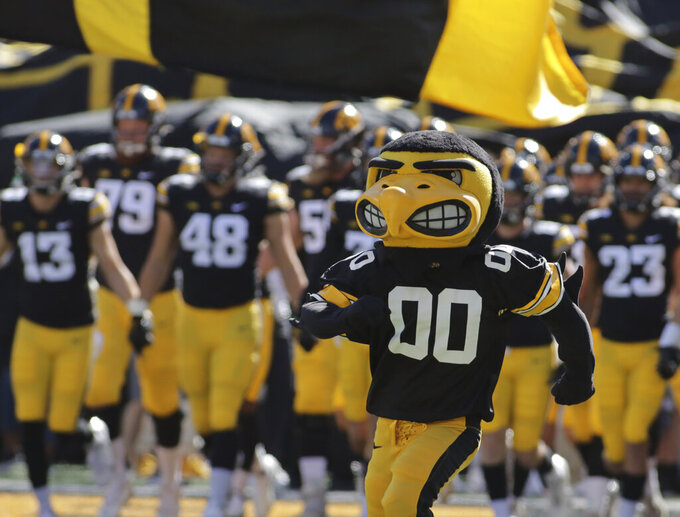 The Iowa Hawkeyes mascot runs onto the field, leading the team before the start of an NCAA college football game against Colorado State, Saturday, Sept. 25, 2021, in Iowa City, Iowa. (AP Photo/Ron Johnson)

Maryland can start 5-0 for the first time since 2001 and has a chance for its first 2-0 start in Big Ten play since joining the conference before the 2014 season. Iowa will try to continue an impressive start to the season that has landed the Hawkeyes in the top five and given them legitimate playoff hopes.

Maryland quarterback Taulia Tagovailoa vs. the Iowa secondary. Tagovailoa has taken advantage of a strong receiving group to lead the Big Ten with 1,340 yards passing. He's also thrown 10 touchdowns with only one interception, and the Terrapins' passing game makes them a threat to pull off an upset in a game like this. Iowa's defense leads the conference with six interceptions so far. The Hawkeyes also lead the nation with 70 interceptions since 2017.

Iowa: RB Tyler Goodson has 11 rushing touchdowns in the last 10 games. He ran for a career-high 153 yards and three touchdowns in a Sept. 18 win over Kent State.

Maryland: DL Sam Okuayinonu has four sacks already, and the Terps lead the conference with 16.

Iowa has won 10 games in a row dating to last year. QB Spencer Petras is 10-2 as a starter. ... The last time the Hawkeyes started 5-0 was in 2015, when they went 12-0 but eventually lost in the Big Ten title game. ... Maryland WR Dontay Demus has caught a pass in 26 straight games and leads the Big Ten with 446 yards receiving. ... Terps RB Tayon Fleet-Davis is averaging 7.1 yards per carry. ... Maryland hasn't beaten a top-five team since a victory over No. 5 Florida State in 2004.