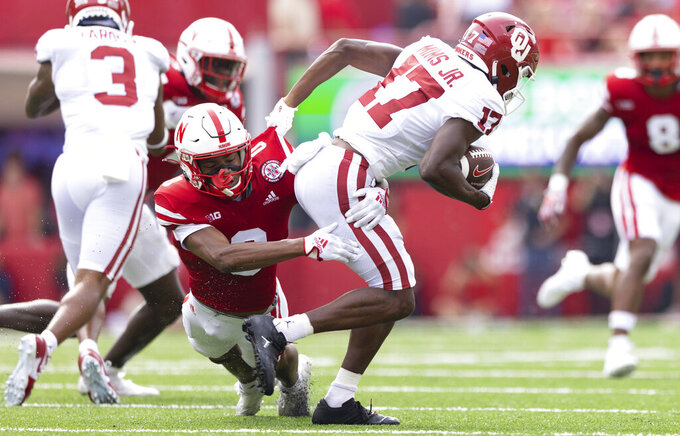 Line: Oklahoma by 12 1/2, according to FanDuel Sportsbook.

Oklahoma has looked dynamic in all phases during a 3-0 start and is in prime position to make a run at a playoff spot under first-year coach Brent Venables. Kansas State has been a thorn in Oklahoma's side in the past, defeating the Sooners in 2012, ‘14, ’19 and 2020. Another loss to the Wildcats, who are coming off a loss to Tulane, would severely cripple Oklahoma's playoff and Big 12 title hopes, especially with possible tough challenges against Texas, Baylor and Oklahoma State remaining.

Kansas State RB Deuce Vaughn. He averages 129.3 all-purpose yards per contest. He has rushed for 352 yards and three touchdowns and has 36 yards receiving. Kansas State coach Chris Klieman calls him the best running back in the nation. Two years ago, Vaughn caught four passes for 129 yards and ran for a touchdown in an upset win over the Sooners.

Oklahoma: WR Marvin Mims. He leads the Sooners with 14 catches for 310 yards and two touchdowns. He also has 118 punt return yards and ranks 17th nationally with 143.7 all purpose yards per game.

Oklahoma coach Brent Venables played for Kansas State before becoming an assistant coach there. ... Kansas State quarterback Adrian Martinez led Nebraska into a game in Norman last season. He passed for 289 yards and a touchdown in a 23-16 loss. ... Kansas State linebacker Shawn Robinson has stepped away from the team for personal reasons. ... Oklahoma leads the nation with 32 tackles for loss.