No. 7 Gophers head to No. 23 Iowa out to prove selves again 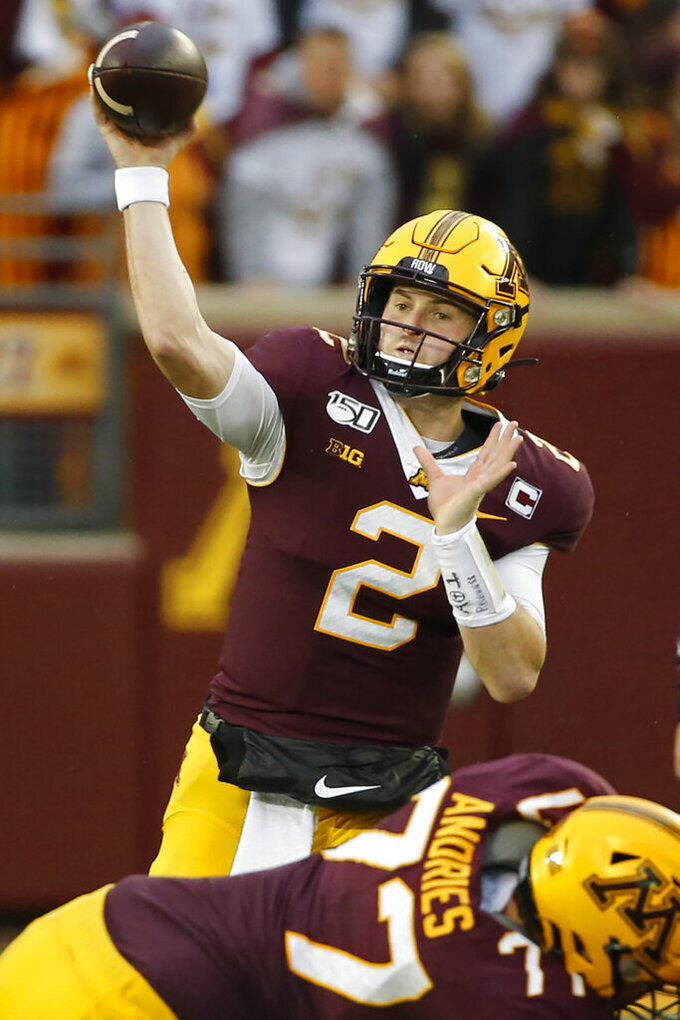 Minnesota apparently still has some doubters. A week after the Gophers (6-0 Big Ten, No. 8 CFP) beat Penn State as a home underdog to run their record to 9-0 for the first time since 1904, they go on the road to Iowa (6-3, 3-3) as a three-point ’dog. Tanner Morgan is the Big Ten’s most efficient passer and the defense has been stout when called on. Iowa’s defense is looking to atone after Wisconsin ran for 300 yards, the most against the Hawkeyes since 2016. Each of the Hawkeyes’ three losses have been by one score and against ranked opponents.

Ramsey will make his first start for the No. 24 Hoosiers (7-2, 4-2) since the win at Nebraska last month. Another hostile environment awaits at No. 9 Penn State (8-1, 5-1, CFP No. 9). He’ll be going against a secondary that allowed a whopping 17 yards per attempt against Minnesota. The Hoosiers are the only Big Ten team passing for more than 300 yards per game, and six receivers have at least 20 catches apiece.

The Hoosiers are 0-10 all-time at Penn State and have lost 37 consecutive games against top-10 opponents since 1987. ... Come Saturday, Northwestern (vs. Massachusetts) will have gone 62 days since its last win. That’s the longest in-season drought since Gary Barnett’s 1998 team went the same number of days between wins. ... The team with the most rushing yards has won 44 of the last 49 games between Michigan State and Michigan. The Wolverines are seventh in the Big Ten in rushing, the Spartans are 13th. ... Rutgers is a 51-point underdog at home to Ohio State, the largest spread in a Big Ten game since the Buckeyes were 41-point favorites over Illinois in 2017. The last time the Buckeyes were so heavily favored was in 2013, when they were favored by 51 against Florida A&M and won 76-0.

Nebraska, 14 ½-point underdog at home to No. 15 Wisconsin

The Huskers (4-5, 2-4) are a double-digit underdog at home for the second time this season and for the third straight year against No. 15 Wisconsin (7-2, 4-2, No. 14). If the Cornhuskers hope to win, or even keep it close, they must slow down Jonathan Taylor. They’ve surrendered a combined 470 yards to Taylor in the last two meetings.

Lewerke is playing some of the worst football of his career as he goes to the Big House to face one of the nation’s top defenses in No. 14 Michigan (7-2, 4-2, No. 15). Lewerke is completing just 50% of his passes with two touchdowns and six interceptions during the four-game losing streak that’s followed a 4-1 start. Playing with a sore right (throwing) shoulder, he was just 5 for 25 for 66 yards in last year’s 21-7 loss to the Wolverines. On Tuesday, he said he took a hit to the head against Illinois — “definitely rung my bell for a little bit " — but said he felt OK.