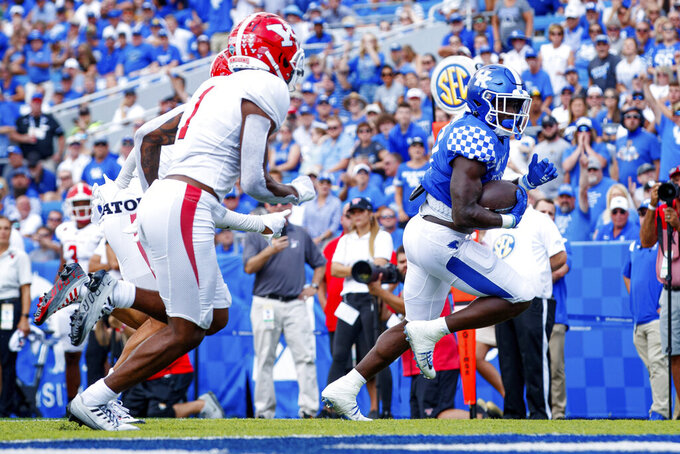 Kentucky running back Kavosiey Smoke, right, runs the ball into the end zone during the second half of an NCAA college football game against Youngstown State in Lexington, Ky., Saturday, Sept. 17, 2022. (AP Photo/Michael Clubb)

Line: Kentucky by 25 1/2 according to FanDuel.com Sportsbook.

Northern Illinois aims to bounce back from a 38-28 home loss to Vanderbilt and halt a two-game slide. Kentucky is coming off a 31-0 rout of Youngstown State and seeks a 4-0 start in its final non-conference game before resuming SEC play next week at Mississippi.

Northern Illinois QBs Rocky Lombardi or Ethan Hampton vs. Kentucky’s secondary. Lombardi completed all seven passes with a touchdown against Vandy last week before leaving with an injury, but he’s listed as the starter with Hampton as the backup. The two combined to complete the Huskies’ first 14 passes with three TDs but face a tall task against the Wildcats. Kentucky leads the SEC with three interceptions and ranks third in passing defense (152 yards allowed per game).

Northern Illinois WR Cole Tucker. The senior leads the team with 15 catches for 278 yards and three touchdowns, including two last week against Vanderbilt with a career-best 70-yarder. Tucker established a career high the previous game against Tulsa with 123 yards receiving. He leads the MAC with 92.7 yards per game.

Kentucky WR Dane Key. The freshman has contributed immediately with 13 catches for team highs of 226 yards and three TDs. He’s coming off a six-catch, 90-yard effort against Youngstown State with a 3-yard TD. Nine of his receptions have come the past two games, highlighted by a 55-yard TD in a 26-16 victory at Florida.

NIU will play its second consecutive SEC opponent before beginning defense of its Mid-American Conference title as the preseason favorite. ... The Huskies led Vanderbilt 28-14 before surrendering the final 24 points. ... Huskies linebacker Kyle Pugh (23 tackles) is playing his eighth FBS season after missing the 2021 season with a knee injury. ... Kentucky hasn’t allowed a point in its last six quarters and snuffed all 12 third- and fourth-down conversion 12 chances by Youngstown State. ... Virginia Tech transfer Tayvion Robinson is tied with Key with 13 catches and second with 202 yards. ___