No. 8 Tennessee, No. 25 LSU geared up for Death Valley clash 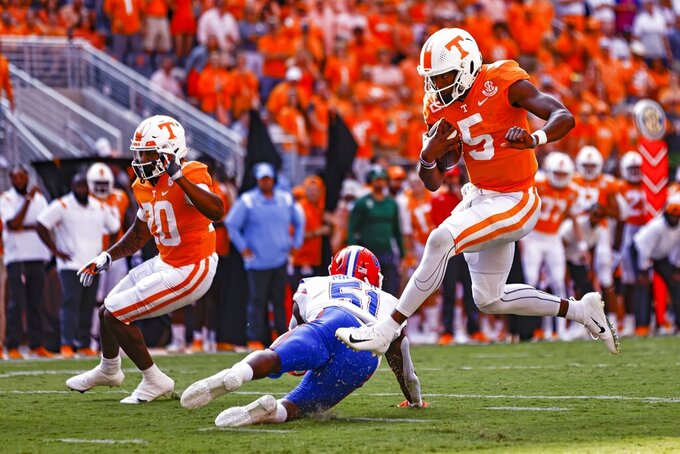 BATON ROUGE, La. (AP) — First-year LSU coach Brian Kelly isn't about to celebrate the Tigers' return this week to the national rankings for the first time in more than a year.

No. 25 LSU is riding a four-game winning streak, but is slated to play three current top-10 teams in the next five weekends, starting with a visit Saturday by No. 8 Tennessee (4-0, 1-0 SEC).

“It’s pretty clear this team plays with great heart, and they’ll fight, but heart and fight will not win games against the opponents that we’re going to have over the next month or so,” Kelly said. “What I will make clear when I get a chance to talk to the team is, having heart and fighting the way we do — that’s not going to get it done against Tennessee.”

In all three of its games against major conference teams this season, LSU (4-1, 2-0) fell behind by multiple scores. They came within a blocked extra point of rallying to tie Florida State in their opener, stormed back to beat Mississippi State by outscoring the Bulldogs 31-3 in the last 31 minutes, and scored 21 unanswered points to climb out of a 17-0 hole at Auburn last week.

“Hopefully, what’s come out of this is that we’ve learned that our preparation is going to have to be so much better — and then bring the heart, then bring that fight, because you’re going to need that, too,” Kelly said. “But you can’t just rely on that and play sloppy football and expect to win these games.”

Meanwhile, LSU arguably represents the toughest test this season for Tennessee, which is trying to start 5-0 for the first time since 2016.

The Vols' early overtime victory against Pittsburgh lost luster after Pitt fell to Georgia Tech and fell out of the rankings. And while a 38-33 victory over Florida two weeks ago reflected well on dynamic QB Hendon Hooker and the Vols' offense, their defensive performance was shaky. None of Tennessee's first four opponents this season are currently ranked.

So Vols coach Josh Heupel warned his players against resting on any early lead they might get against LSU.

“The way they play and compete no matter what the scoreboard looks like, you have to be prepared for their best for 60 minutes,” Heupel said. "You can see that from Week 1 all the way through this past week.”

Heupel hasn't been surprised to see LSU, which went 3-5 in the SEC last season, getting off to a promising start under Kelly.

“He’s done a really good job everywhere he has been,” Heupel said. “His teams are well coached, they compete hard.”

Tennessee leads the SEC in six different offensive categories, with the Vols topping the nation averaging 559.3 total yards, 365.8 yards passing and scoring on all 22 trips inside the red zone. The Vols also have scored at least 30 points in an SEC-best seven straight games for the first time since 2016-17.

LSU totaled 85 yards through the air at Auburn last week, and Kelly was not pleased.

“That’s not going to get you a sustainable offense that can win games at the highest level in the SEC,” Kelly said.

Starting QB Jayden Daniels passed for 80 yards before leaving with knee soreness (he practiced this week).

Kelly said that while he's pleased his quarterback hasn't been intercepted, he wants Daniels to be “a little bit more aggressive.”

“We’ve got to get it into some tight windows sometimes," Kelly continued, adding that LSU receivers "can make plays, and we have to get them the ball.”

Vols quarterback Hendon Hooker has thrown a TD pass in 16 straight games, the second-longest streak in program history and two off the mark of 18 set by Heath Shuler. He ranks sixth in the Bowl Subdivision and leads the SEC averaging 342 yards of total offense. He’s third in the SEC with 298.2 yards passing per game despite his favorite wide receiver missing the Vols’ win over Florida.

Cedric Tillman had surgery on an ankle injury to help him recover more quickly, though Heupel said the receiver was limited Monday.

In just six games before his ankle injury last season, Boutte had 509 yards and nine TDs receiving. Boutte, who is eligible to enter next spring's NFL draft, has played in four games this season and has 11 receptions for 97 yards without a score.

“Obviously, we’re trying to get him the football. He is getting a lot of double coverage,” Kelly said. “The numbers won’t dictate where he gets drafted. It’s his ability to continue to play the game at the highest of levels, and when you turn on the film and he is running full speed and he is beating guys and the ball didn’t come to him for whatever reason, that’s out of his control."