No. 9 Michigan aims to bounce back against Indiana 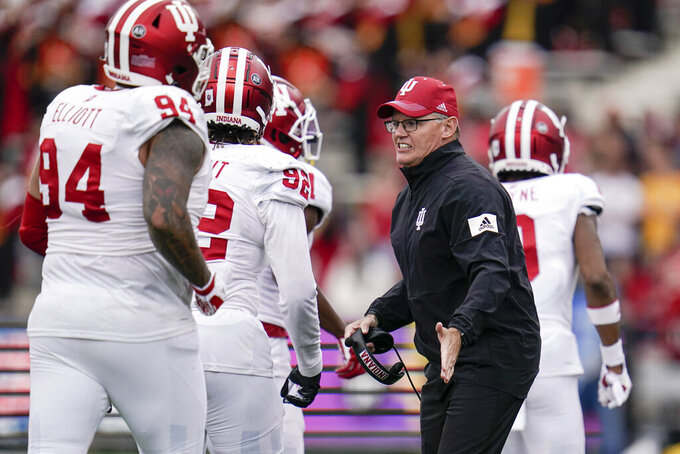 Indiana head coach Tom Allen, center, talks to his team as they run off the field during the second half of an NCAA college football game against Maryland, Saturday, Oct. 30, 2021, in College Park, Md. Maryland won 38-35. (AP Photo/Julio Cortez)

The No. 9 Wolverines gave away a 16-point lead to in-state rival Michigan State on Saturday in a 37-33 defeat, their first loss of the season. Michigan will need to recover by this Saturday night, when they host unranked Indiana.

“I’ve seen the team for a long time now, the way they respond,” Harbaugh said. “Whether it’s a setback or chatter. I know how they’re going to respond. ... which is come back with more resolve, more determined, to prepare and get ready for our next ball game.”

The Wolverines (7-1, 4-1 Big Ten) could still win the Big Ten championship and reemerge in the College Football Playoff race but they no longer have a margin for error. They will likely need to win their remaining four regular-season games, including the annual finale against arch-rival Ohio State, to reach those goals.

Michigan's run defense needs to tighten up after Spartans running back Kenneth Walker III piled up 197 yards and five touchdowns. Quarterback Cade McNamara threw for a career-best 383 passing yards but the running back duo of Blake Corum and Hassan Haskins was limited to 104 yards on 27 carries.

“You don’t want the backs to be hit on the line of scrimmage,” Harbaugh said.

The Wolverines unveiled a new receiving option in freshman Andrel Anthony, who caught six passes for 155 yards and two touchdowns. He hadn't caught a pass before Saturday.

“To have that performance, it showed what I have been doing has paid off a lot,” Anthony said. "It makes the work learning about the plays, coverages — my investment is paying off for sure.”

Indiana (2-6, 0-5) carries a four-game losing streak into the night game. The Hoosiers allowed 419 passing yards in a 38-35 loss to Maryland on Saturday.

“Disappointed in our defense,” coach Tom Allen said. “Didn’t rise up when we needed them in the third quarter, especially after we took the lead.”

Allen is more concerned about Michigan's rushing attack than its passing game.

“You can just tell from the very beginning of the season that was what they wanted to be able to do — establish the run game,” he said. “And they’ve done a really good job of that.”

The last time the Hoosiers defeated Michigan on the road, their 51-year-old head coach hadn't even been born.

Indiana's last victory there came on Oct. 21, 1967, a 27-20 triumph. Michigan has won 39 of the last 41 overall meetings, thought the Hoosiers snapped a 24-game losing streak to the Wolverines last season. Quarterback Michael Penix Jr. threw for 342 yards and three touchdowns in Indiana's 38-21 breakthrough victory at home. He hasn't played since Oct. 2 this season due to a shoulder injury.

The Wolverines have gotten off to fast starts throughout the season. They have outscored their opponents 151-44 before halftime. They've been especially dominant in second quarters with a 100-31 margin.

In its loss to Michigan State last week, Michigan led 23-14 at the break.

Harbaugh still plans to use a two-quarterback system. “We want to play J.J.,” he said. “We really believe that he adds to our chances of winning.”

The 18-year-old true freshman struggled mightily after Tuttle got hurt on the opening series against No. 5 Ohio State but rebounded last week, going 14 of 25 with 242 yards and two TD passes in a loss at Maryland.

With Penix and Tuttle still on the mend, it appears McCulley will have another prime-time slot to show what he can do. Allen is eager for him to get that chance.

“He doesn’t back down,” Allen said. “He didn’t back down when he first got thrown in there against Ohio State. He attacks things and believes in himself. He has a pretty calm demeanor, you know, doesn’t get frazzled.”

While Hoosiers linebacker Micah McFadden leads the Big Ten with 14 tackles for loss and is tied for second in the nation, Peyton Hendershot has been breaking records. Hendershot can reach another milestone Saturday.

His next touchdown catch will give him a share of the school record for tight ends. Ted Bolser had 15 TD receptions from 2010-13. Hendershot has already broken Bolser’s records for receptions and yards receiving and enters Saturday with 125 receptions and 1,383 yards.