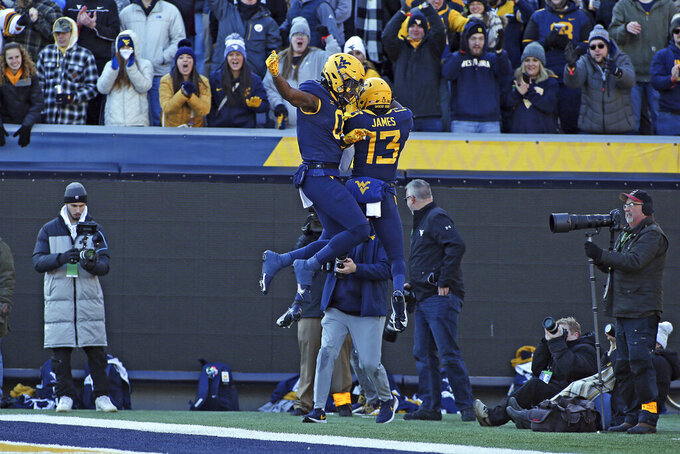 Oklahoma State looks to bounce back from a loss to rival Oklahoma. The Cowboys fell behind 28-0 against the Sooners, then dominated the final three quarters before losing 28-13. Oklahoma State opened the season with high hopes after a 5-0 start. Now, the Cowboys are out of the running for the Big 12 title and hopes to build momentum heading into bowl season. West Virginia coach Neal Brown is struggling and just needs to get a win. His Mountaineers have dropped four of five.

Oklahoma State: S Jason Taylor II. He's all over the field, all the time. Against Oklahoma, he intercepted a pass and recovered a fumble. He leads the Big 12 in solo tackles and ranks fourth nationally with five interceptions.

Sanders threw four interceptions in a 28-13 loss to Oklahoma last week. ... Oklahoma State has won the past seven games against the Mountaineers. ... Oklahoma State ranks 15th nationally in tackles for loss. ... West Virginia WR Sam James has 44 catches for 726 yards and six touchdowns. ... West Virginia WR Bryce Ford-Wheaton has 60 catches for 653 yards and seven touchdowns this season. His 5.5 receptions per game rank second in the Big 12.