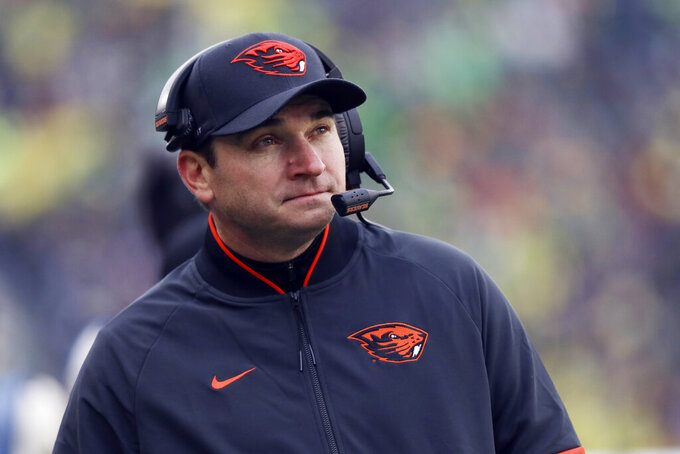 FILE - In this Nov. 30, 2019, file photo, Oregon State head coach Jonathan Smith looks at the scoreboard during the first half of an NCAA college football game against Oregon in Eugene, Ore. Oregon State opens the season against Purdue. (AP Photo/Amanda Loman, File)

Purdue has quite the bash planned for Saturday night's season-opener.

It will play its 500th game at Ross-Ade Stadium underneath the lights, with thousands in the stands and renewed hope of reviving a program coming off back-to-back losing seasons.

All the Boilermakers need now is a victory celebration to cap the historic weekend.

“I think getting back in our stadium in front of our fans will be exciting for the players, exciting for all the Purdue fans," coach Jeff Brohm said. “We want to go out and execute, play hard-nosed, tough, physical football and play the game the way it’s supposed to be played, competing to the very end."

Historically, the Boilermakers have played their best football at home. Nearly two-thirds of the program's 620 wins have come on one of three home fields with the last 290 at Ross-Ade.

Oregon State will make its second appearance on Purdue's home turf after ruining homecoming weekend for the then second-ranked Boilermakers in 1967.

And they'll have another chance to crash the party Saturday by snapping a three-game losing streak.

The Beavers went 2-3 in close games, setting a single-season school record for games decided by six or fewer points. And even though coach Johnathan Smith's teams have been among the nation's best at avoiding giveaways during his three-year tenure, his resume includes only two non-conference wins —- Southern Utah in 2018 and Cal Poly in 2019.

Beating the Boilermakers would send an early signal this season could be dramatically different.

“They’re similar to us, you look back even last year in regards to their games they played, how close they were," Smith said. “Similar as in regards to how many returning players, they’ve got and we’ve got. I think it’s a matchup that should be highly competitive."

So are Brohm and his players, who can set off the big finish by ending a four-game skid.

“You put in all this work all year long, you dedicate a lot of your life to finding ways to improve and get better and win football games," Brohm said. “There’s no reason not to go out there and be excited, lay it all on the line, cut it loose each and every week, play free, want to make plays, want to be aggressive, want to go for the win."

Former Colorado quarterback Sam Noyer will be the starter for Oregon State after battling Tristan Gebbia and Chance Nolan over the past several weeks. Noyer threw for 1,101 yards and six touchdowns in six games and got some help in the competition when Gebbia hurt his hamstring.

“Throughout camp, I thought the whole quarterback room did a good job going back and forth. It was very close,” Smith said. “Ultimately getting ready for a game week, felt like the best way to do it was make a decision on Monday so we can have a week of work with the game plan."

Gebbia is a former Nebraska transfer who started last season but suffered a serious hamstring injury against rival Oregon in November that required surgery. Smith said Gebbia could regain the job when he's healthy.

But as Purdue looks for a complementary piece to Bell, the players to watch are Milton Wright, Jackson Anthrop, T.J. Sheffield and Mershawn Rice.

“We want to play as many as we can," Brohm said. “But at the same time our best players will play the most.”

Smith said 86% of his players were vaccinated going into fall camp, a number that's continued to increase.

“I haven’t gotten the latest (number) but I know we had a few unvaccinated guys in camp get vaccinated,” he said.