Pac-12 has no clear favorite, but plenty of potential 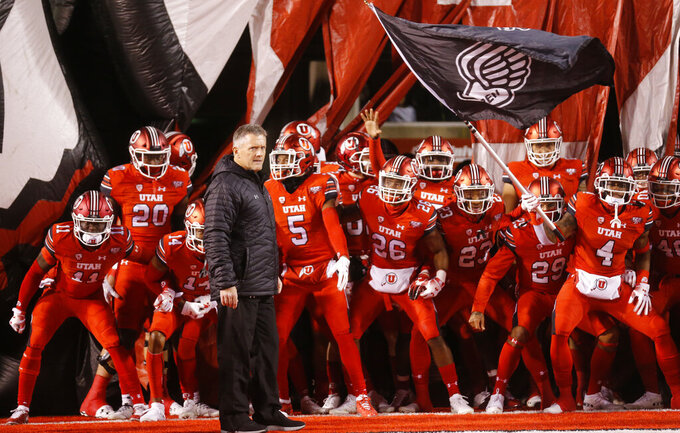 FILE - In this Nov. 24, 2018, file photo, Utah head coach Kyle Whittingham and his team prepares to take the field prior to their game against the BYU during an NCAA college football game, in Salt Lake City. The Utes were selected to win the Pac-12 in the preseason media poll and they're also ranked in the preseason coaches' poll. (AP Photo/Rick Bowmer, File)

LOS ANGELES (AP) — The Pac-12's national championship drought hits 15 years this winter, and there are few signs of a respite. Several of the conference's traditional powers are in states of rebuilding or disarray heading into a season that's murkier than a Mike Leach metaphor.

But to the coaches entrusted with returning the West Coast's major conference to national competitiveness, this seeming parity actually underlines the overall strength of a league on the rise again. Elite talent is easy to find around the Pac-12, and several programs are in a position to potentially put it all together.

"There are not a lot of conferences out there that can legitimately look up and say more than half their conference has a chance to win the conference," Stanford coach David Shaw said. "The people that know football know how deep and how difficult this conference is. The people that only want to look in two spots, in the SEC and the Big Ten footprint, you can't win them over anyway, because they're not paying attention to the scope of college football."

Still, the Pac-12 doesn't have a traditional power in peak form after graduation losses at defending champion Washington and Stanford, Southern California's miserable 2018 season and the questions still looming around resurgent Oregon and its 5-4 conference mark.

Whether the Utes live up to their hype or another power emerges, Huskies coach Chris Petersen is confident this league is on its way up again.

"Five or six years ago, the Pac-12 could do no wrong," Petersen said. "We were in the greatest position ever, and we were going to do this and that. And five years later, (people think) we don't even know how to play football anymore. It's always somewhere in between. I know we've got good players out here, and good coaches and programs. I think it's all cyclical."

Here are more things to watch during the Pac-12 football season:

Utah is the preseason favorite, but it's not going to anybody's head in Salt Lake City, according to coach Kyle Whittingham. In fact, he wants his Utes thinking not about national championships, but only about achieving Pac-12 supremacy, largely because the league's South Division teams are 1-7 in the league championship game. "We felt like we were going to have some preseason hype, and so we wanted to make sure that we got out ahead of it and talked to our players about just ignoring the noise and staying focused," Whittingham said. "We all know that the Pac-12 championship is our goal, as I'm sure it is for every team in the Pac-12, so the focus is not on the goal. It's (on) how we are going to achieve that goal."

Coach Clay Helton clearly needs a swift rebound with his Trojans coming off their first losing season since 2000, including five losses in their last six. USC finished 91st in scoring in the FBS despite a talent-studded offensive roster, and Helton addressed the problem by hiring blue chip coordinators Kliff Kingsbury and then Graham Harrell, who brings his version of the Air Raid offense to Tailback U. The Trojans' brutal early season schedule is an obstacle to a quick turnaround, but Helton knows what's expected — or else.

Quarterback Justin Herbert returned to Oregon for his senior season, and he'll finally have the same coach in consecutive years. Mario Cristobal's Ducks should contend for their first league title since 2014 if Herbert takes another step from his 3,000-yard season last fall. Herbert calls it "a huge bonus" to have the same coaching staff for the first time: "We go from having spent all this time learning to teaching. We're able to reach out to those younger guys, get them dialed up and up to speed so they are able to jump in as soon as we can."

Although Washington is heading into its biggest rebuilding season in a half-decade after losing 13 starters from last year's champions, quarterback Jacob Eason has hopes running high in Seattle. The touted local product returned from Georgia last season in hopes of replacing four-year starter Jake Browning this fall. Petersen insists Eason is competing with sophomore Jake Haener in camp, but most expect Eason and running back Salvon Ahmed to step in for Huskies stalwarts Browning and Myles Gaskin.

UCLA is coming off its worst season since 1977 after going 3-9 in coach Chip Kelly's debut. Those Bruins largely got a pass due to the program's steady decline in Jim Mora's final seasons, and they also beat USC. But the deep-pocketed UCLA boosters who attracted Kelly will be looking for some return on their investment this fall, and they might get it if Kelly fields an improved offense around quarterback Dorian Thompson-Robinson.