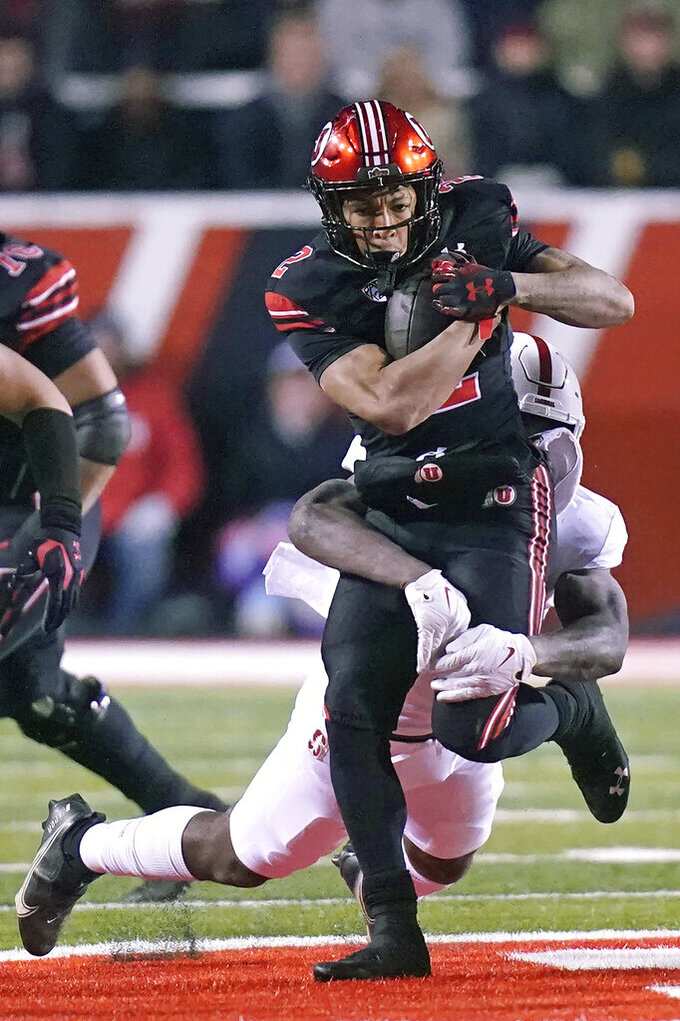 Dan Lanning had regrets. That should be expected after the coach watched Oregon’s chances of making the College Football Playoff slip away because of decisions he'd like to have back and mistakes on the field a week ago.

“I think we all had a taste in our mouth that we’re ready to get out of our mouth,” Lanning said. “Ready to go back and attack things. This (last) weekend certainly didn’t go the way we anticipated. Like I said after the game, that really falls solely on me.”

But those regrets can’t linger if the 12th-ranked Ducks still want to make this a special season, not with a visit from No. 10 Utah coming up on Saturday night.

While the Ducks' playoff chances were shot down by Washington last week, they still control their path to the Pac-12 championship game and a chance at the Rose Bowl in Lanning’s first season.

Beat Utah, beat Oregon State next week and the Ducks (8-2, 6-1 Pac-12, No. 12 CFP) will be bound for Las Vegas no matter what else happens around the conference.

The same scenario holds true for the Utes and their hopes of getting back to the conference title game. Thanks to its win over Southern California that started a four-game win streak, Utah (8-2, 6-1, No. 10 CFP) will find a spot in Las Vegas if it beats the Ducks and then Colorado next week.

In that sense, Saturday's matchup could be viewed as a de facto semifinal, although there still remains a scenario where five teams could all finish 7-2 in conference play and create tiebreaker chaos.

“Obviously, the game this week has implications, conference implications as does every game. You say this is a big game, they’re all big. If you lose one prior to this then this game doesn’t matter. So every game is important,” Utah coach Kyle Whittingham said. “It’s gonna be a tough environment. ... We’ve got to handle the crucible that is Autzen Stadium."

Oregon came out of the loss to Washington banged up, with the biggest concerns surrounding quarterback Bo Nix, who appeared to suffer a lower leg injury in the fourth quarter. Nix returned for Oregon’s final drive but was on the sideline when Lanning chose to go for it on fourth-and-1 from the Ducks’ 34 with less than two minutes remaining. The Ducks were stopped when running back Noah Whittington slipped in the backfield.

“In retrospect, I wish I would have called a timeout based on the look we got not so much just to get Bo in,” Lanning said. “But it’s really easy to go back and replay the game in your head. There’s probably 10 plays that I would have played a lot different.”

Oregon also has concerns on the offensive line after Ryan Walk and Alex Forsyth suffered injuries against Washington. Lanning declined to give updates on the status of either earlier this week.

Utah beat the Ducks twice last year by a combined score of 76-17, including a 38-10 thumping in the conference championship game. One of the deciding factors in the two wins was Utah running back Tavion Thomas. He rushed for 94 yards and three touchdowns in the 38-7 regular season victory, and followed up with two more touchdown runs in the championship game.

Thomas had been quiet most of this season while dealing with personal issues but finally had a breakout game last week in a win over Stanford, rushing for a career-high 180 yards and two touchdowns.

Utah took a chance nearly a month ago when it quietly kept quarterback Cameron Rising out for its game at Washington State and managed to escape with a 21-17 victory. Since getting that extra bit of rest, Rising hasn’t been asked to do much in easy wins over Arizona and Stanford.

Rising didn’t need big numbers in the wins over the Ducks last season. But this may be his opportunity facing an Oregon pass defense that ranks 127th in the country in yards passing allowed and just gave up 408 yards to Washington QB Michael Penix Jr.

“You can tell by the way (Rising) plays he has that demeanor about him that he’s not scared to do things by himself,” Rogers said.