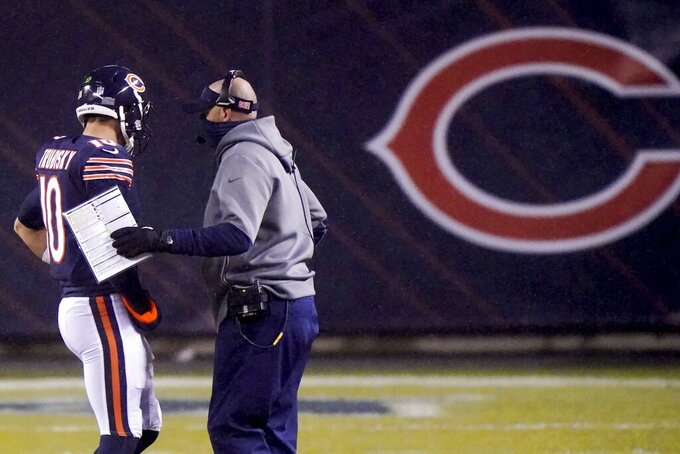 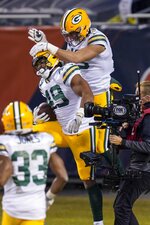 CHICAGO (AP) — Aaron Rodgers threw for four touchdowns, breaking his franchise record for scoring passes in a season, and the Green Bay Packers clinched the No. 1 seed in the NFC by beating the playoff-bound Chicago Bears 35-16 on Sunday.

The Packers (13-3) earned a bye while winning their sixth in a row and beat Chicago (8-8) for the 19th time in 22 games, counting the postseason.

The Bears are headed to the playoffs for the second time in coach Matt Nagy’s three years despite the loss because Arizona fell to the Los Angeles Rams. Chicago will be at New Orleans (12-4).

Rodgers joined Peyton Manning (2004 and 2013) as the only players to throw for at least 45 touchdowns in multiple seasons. He now has 48, surpassing his previous high of 45 in his first MVP season of 2011.

Rodgers completed 19 of 24 passes for 240 yards without an interception and had a 147.9 rating. He also improved to 21-5 against Chicago, counting the postseason.

Davante Adams broke Sterling Sharpe’s record for receptions in a season and tied his mark for touchdown catches in a year. Adams had six receptions to bump his total to 115 and surpass Sharpe’s mark of 112 in 1993. His 6-yard score late in the game gave him 18 TD’s, matching Sharpe’s team record in 1994.

Aaron Jones ran for a score in the closing minutes. And the Packers beat Chicago again after pounding the Bears at Lambeau Field to start their win streak.

The Bears jumped back into contention by winning three straight against struggling teams after dropping six in a row. But against Green Bay, the result was a familiar one.

Mitchell Trubisky went 33 for 42 with 252 yards and an interception.

Rookie Darnell Mooney set career highs with 11 catches and 93 yards before leaving early in the fourth period with an ankle injury. He was hurt when he was tackled going out of bounds after a catch.

David Montgomery ran for 69 yards and a touchdown and caught nine passes for 63 yards. Cairo Santos made all three field goals, extending his streak to a franchise-record 27.

The Packers were leading by five early in the fourth quarter when the Bears opted to go on fourth-and-1 at the 25 rather than kick a field goal. Trubisky’s pass to Allen Robinson got broken up. Green Bay then went 76 yards, with Jones scoring from the 4 to make it 28-16 with 3:47 remaining.

Adrian Amos then intercepted Trubisky at midfield and returned it to the Chicago 26, leading to a 6-yard touchdown catch for Adams.

Bears: LB Roquan Smith (elbow) was hurt defending a run late in the first quarter and headed to the locker room.

Packers: The Packers have their sights set on a deep playoff run after losing to San Francisco in the conference championship game last season. They are off next weekend.