Saban: Tua may be game-time decision, Forristall out 6 weeks 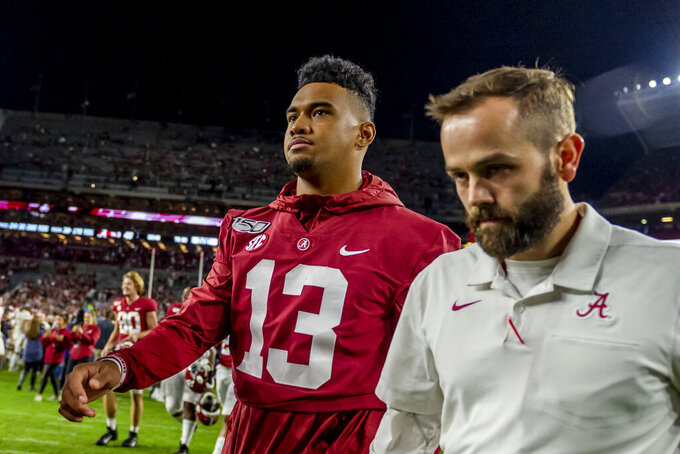 Alabama quarterback Tua Tagovailoa (13) walks off the field having missed the game due to an earlier injury after an NCAA college football game against Arkansas, Saturday, Oct. 26, 2019, in Tuscaloosa, Ala. (AP Photo/Vasha Hunt)

TUSCALOOSA, Ala. (AP) — Alabama quarterback Tua Tagovailoa has returned to practice on a limited basis, but tight end Miller Forristall could be out for the next six weeks.

Coach Nick Saban says Tagovailoa could be "a game-day decision" with a sprained right ankle but he took snaps and went through some work "on air" in Wednesday's practice. He didn't go through team drills as the second-ranked Crimson Tide prepares for the Nov. 9 game against No. 1 LSU.

"This is going to be a day-by-day, game-day decision," Saban said. "And there's nothing really else that I can say about it. I can tell you that his mentality has been really good in terms of how he's working, the things he's doing and how he's progressing and his attitude of trying to get back on the field and trying to progress.

Tagovailoa underwent a "tightrope" procedure on Oct. 20. The high ankle sprain is the same injury the 2018 Heisman Trophy runner-up suffered in the Southeastern Conference championship game last season, just to the other ankle.

He returned in time to play in the College Football Playoffs against Oklahoma, but this would be a quicker comeback.

Mac Jones started for the Tide against Arkansas last weekend.

Forristall got hit in the throat in the Arkansas game and had surgery to repair an injury to his voice box.

Forristall has 12 catches for 131 yards and three touchdowns. Saban says it didn't initially seem like a serious injury and Forristall was able to return to the game. Backup tight end Major Tennison has 21 yards and a TD on three catches.