Schedule eases for No. 2 Buckeyes with trip to Northwestern 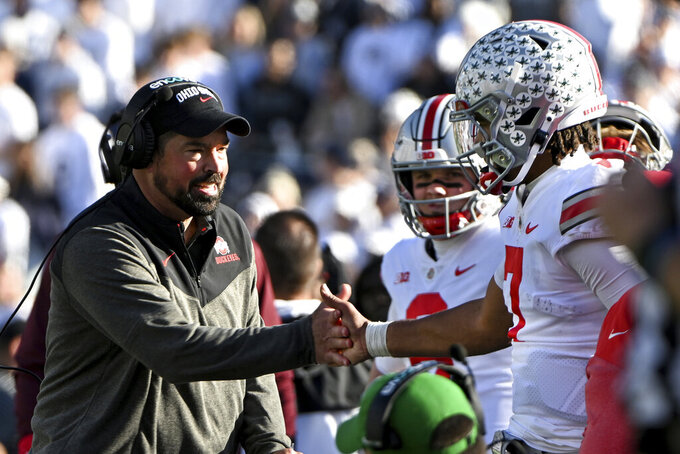 Line: Ohio State by 37 1/2, according to FanDuel Sportsbook.

Ohio State was No. 2 behind Tennessee in the first College Football Playoff rankings of the season. The Buckeyes and Volunteers are also tied in the AP poll with Georgia in the top spot. After rallying to beat then-No. 13 Penn State 44-31 behind J.T. Tuimoloau’s strip sack and pick-6 in the fourth quarter, Ohio State enters an easier stretch. The Buckeyes also meet Indiana and Maryland before the showdown with No. 4 Michigan in Columbus on Nov. 26. Ohio State has won nine straight against Northwestern, including the 2018 and 2020 Big Ten championship games. The Wildcats have not won since beating Nebraska in the opener in Ireland.

Ohio State: Tuimoloau had a monster game against Penn State with two sacks, two interceptions, a pick-6, a forced fumble, a fumble recovery and a pass deflection that a teammate came down with for an interception.

Northwestern: QB Brendan Sullivan. He made his second straight start and got sacked seven times in a 33-13 loss at Iowa. Sullivan completed 23 of 30 passes for 159 yards with two touchdowns and an interception.

Ohio State running back Miyan Williams left last week’s game with an arm injury, but it is not considered serious. Still, coach Ryan Day said Dallan Hayden and converted linebacker Chip Trayanum were being prepped this week to back up TreVeyon Henderson. ... Buckeyes receivers coach Brian Hartline said he expected injured star Jaxon Smith-Njigba to play at some point this season. He suffered a hamstring injury in the opening week win over Notre Dame. ... Ohio State has won 33 of the past 34 against Northwestern, the loss coming in 2004 at Ryan Field. Ohio State is averaging 48.9 points, second in the nation to Tennessee (49.4), and has not scored fewer than 44 points in a conference game.