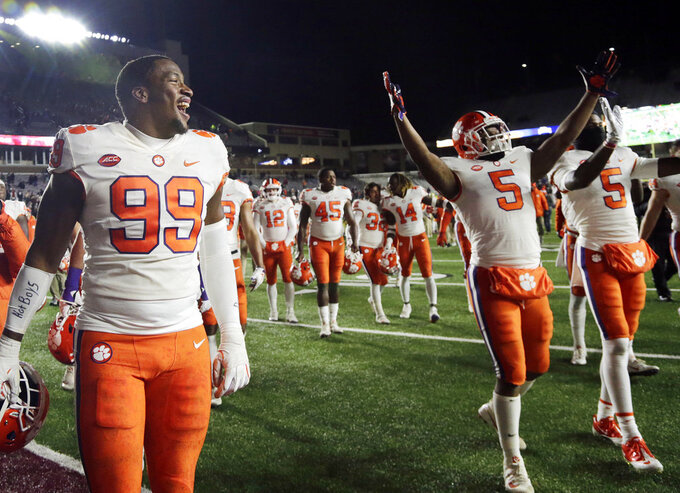 CLEMSON, S.C. (AP) — While Clemson coach Dabo Swinney feels like this season has gone by quickly, his time with his record-setting seniors probably has slipped by even faster.

Clemson (10-0, 7-0 ACC) looks to complete a perfect run through the Atlantic Coast Conference regular season when it faces Duke (7-3, 3-3) on Saturday night.

The Tiger seniors are 50-4 since arriving at Clemson and have a chance to set an ACC mark with their 51st victory, not to mention their three previous ACC championships and the 2016 national title they picked up during their time.

"It's sad because you know they have to go," Swinney said. "It's going to be my last Thanksgiving with these guys. It's also comforting to know that they've prepared and they'll do great in life. They've just brought me a lot of joy."

Each one will get to feel that at Death Valley a final time before the game when, as is Clemson tradition, they'll make a solo run down the hill onto the field in front of a packed house.

Clemson offensive coordinator said Wilkins has been a difference maker since stepping on campus. Big things were expected and Wilkins delivered, Venables said.

"We knew that if he came that he would make everyone around him better and enhance the locker room," Venables said. "He has done that and then some."

Of course, all the Tigers understand there's work ahead for them to finish things off in the best way possible. They're looking to stay on track for an undefeated season and stay sharp for an ACC championship game and College Football Playoff run next month.

Duke coach David Cutcliffe believes Clemson may be as challenging an opponent as he's faced the last few decades. "We prepared for a lot of great football teams over 30 plus years but this team is complete," he said.

Some other things to watch when Duke visits No. 2 Clemson on Saturday night:

These teams from different ACC divisions have not played each other since Clemson's 56-20 win at Duke in 2012. The Tigers have won four straight in the series. Duke's last win came at home in 2004.

Clemson left tackle Mitch Hyatt, who holds the school mark for most snaps played, came out of last week's win over Boston College after what coach Dabo Swinney called "a couple of stingers."

But Swinney said Hyatt had improved and was expected to play.

Duke quarterback Daniel Jones passed for more than 300 yards and ran for more than 100 in last week's win over North Carolina. It's the second time he's done that, giving him two of Duke's three games all times with such numbers. Jones also joined Clemson quarterback Tajh Boyd and Louisville's Heisman Trophy winner Lamar Jackson as the only ACC passers with multiple 300-100 games.

Jones said facing Clemson is a big opportunity "and we're confident that we'll make the most of it."

THE WAIT IS ON

Clemson has plenty of talented seniors like Wilkins and linebacker Kendall Joseph who'll be drafted by the NFL next spring. A couple of draft-eligible Tigers are taking a wait-and-see approach to the next level. Defensive end Clelin Ferrell and tackle Dexter Lawrence are both juniors not ready to commit to leaving. Both have said they'll decide sometime after the season.