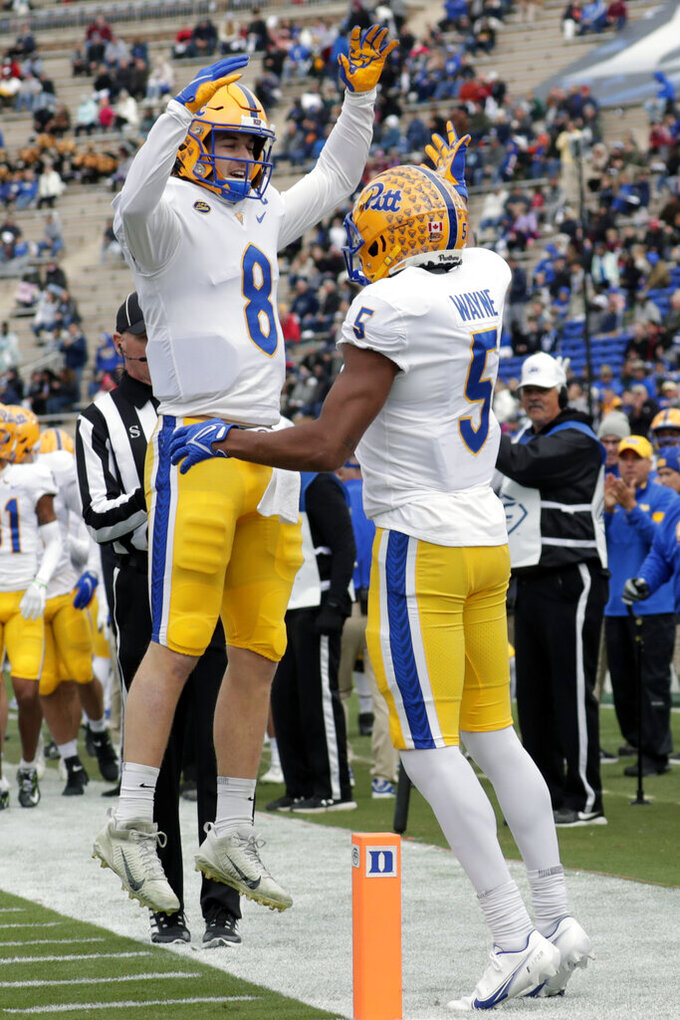 Pittsburgh quarterback Kenny Pickett (8) and wide receiver Jared Wayne (5) celebrate together after Pickett threw a touchdown pass to Wayne during the first half of an NCAA college football game against Duke Saturday, Nov. 6, 2021, in Durham, N.C. (AP Photo/Chris Seward)

Line: Pittsburgh by 6 1/2, according to FanDuel Sportsbook.

Pitt can take another big step toward winning its second ACC Coastal Division title in four years if it can find a way to outscore the Tar Heels. North Carolina, which began the season as heavy favorites to win the Coastal, needs a win and a bunch of help elsewhere to keep any remote chance of forging some sort of convoluted tiebreaker that would earn the Tar Heels a trip to the ACC title game.

Pitt QB Kenny Pickett vs. UNC's secondary. Pickett is putting up the kind of absurd numbers (3,171 yards, 29 TDs) that have thrust him into the Heisman Trophy conversation. He faces a North Carolina defense ranked 97th in the country in yards allowed (420.9) and 110th in points allowed (33.44). Any chance the Tar Heels have of staying close relies heavily on slowing Pickett down.

UNC: WR Josh Downs. Downs ranks sixth in the Bowl Subdivision ranks in receiving (112.7 yards per game), third in catches (8.2) and tied for 11th in TD catches (eight). Downs had a quiet game against Wake Forest and has gone two straight games without a TD catch after having at least one in the first seven games.

Pitt: WR Jordan Addison. The sophomore wide receiver's 11 touchdown receptions are tied for tops in FBS and are the most by a Panther since Larry Fitzgerald's school-record 22 scoring grabs in 2003, when he finished runner-up in the Heisman Trophy race. Addison has been remarkably consistent, scoring at least once in seven of Pitt's nine games.

FACTS & FIGURES: The Panthers broke a six-game losing streak to the Tar Heels in 2019, pulling out a 34-27 overtime victory. ... Expect a close game. The last nine meetings have been decided by an average of 4.2 points. ... UNC QB Sam Howell set the UNC career record for total offense in the Wake Forest win. He already holds the record for passing yards, passing touchdowns and touchdown responsibility in less than three seasons. ... Pickett needs 113 passing yards to break Alex Van Pelt's school record for career passing yardage (11,267). ... The Panthers lead the nation in scoring offense (45.0 points per game) and have topped 50 points four times. The last time that happened? In 1905 when the schedule featured matchups with the likes of Butler YMCA (67-0) and Ohio Medical (51-0).