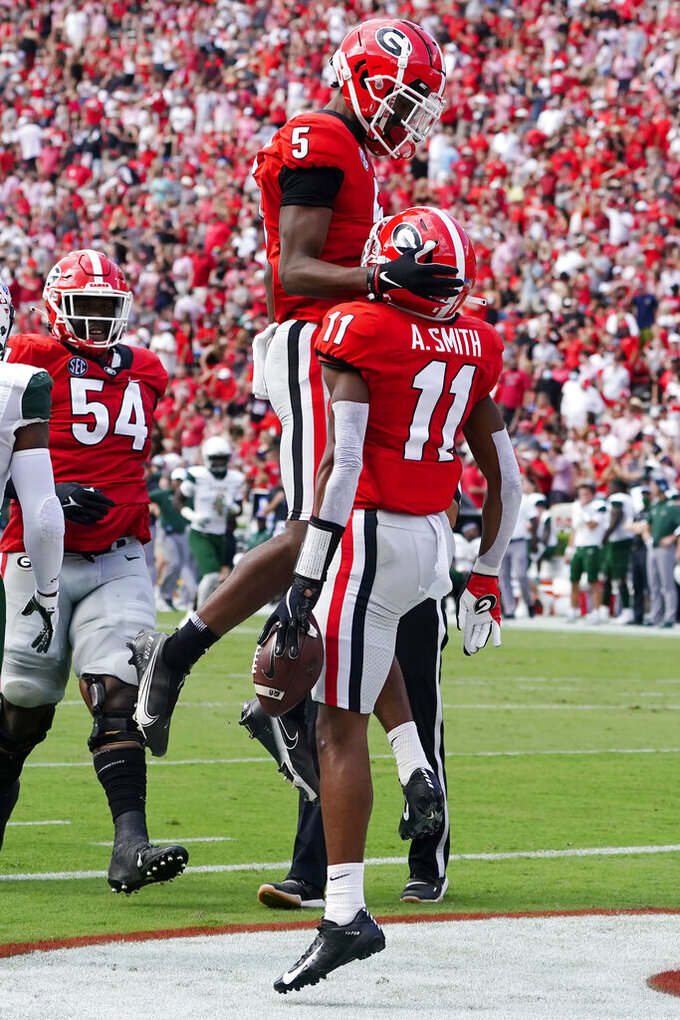 Georgia wide receiver Arian Smith (11) celebrates with Adonai Mitchell (5) after a touchdown catch during the first half of an NCAA college football game against UAB, Saturday, Sept. 11, 2021, in Athens, Ga. (AP Photo/John Bazemore) 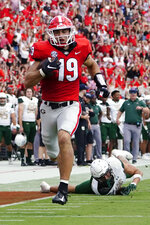 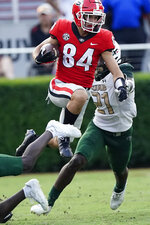 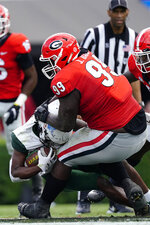 ATHENS, Ga. (AP) — Stetson Bennett did his best to create a quarterback controversy at Georgia.

Stepping in for injured starter JT Daniels, Bennett tied a school record with five touchdown passes in the first half to lead No. 2 Georgia to a 56-7 rout of UAB on Saturday.

The senior completed his first five passes — four of them going all the way to the end zone for the Bulldogs (2-0), who didn't show any signs of a letdown after a 10-3 victory over Clemson in the opener.

It looks as if Bennett hasn't given up on winning it back.

“I guess it's just an innate confidence,” he said. “If you believe you're good enough, it really doesn't matter the situation that is thrust upon you.”

Jermaine Burton set the tone by slipping behind the secondary to haul in a 73-yard TD from Bennett on Georgia's second offensive play, thrilling the raucous crowd of nearly 93,000 at Sanford Stadium.

It was the first full house between the hedges since the 2019 season. Crowds were limited to about 20,000 last season because of the pandemic.

By the opening minute of the second quarter, Bennett had scoring passes of 12 yards to Kenny McIntosh, 89 yards to Brock Bowers and 61 yards to Arian Smith.

At that point, Bennett's passer rating was a staggering 775.6. The Blazers' secondary didn't put up much resistance, leaving Burton, Bowers and Smith wide open with blown coverages.

“It always helps when you've got great players all over the field," Bennett said.

Bennett tacked on his fifth TD pass of the game with another to Bowers, the freshman tight end finding a seam in the zone to grab a 9-yard throw that sent the Bulldogs to the locker room with a 35-0 halftime lead.

Bennett played only one more series in the second half and, yes, led the Bulldogs to another TD. He set it up with a 20-yard scramble — Georgia's longest run of the day — before James Cook took it in from the 14.

Bennett finished 10 of 12 passing for 288 yards and became the sixth Georgia quarterback to pass for five touchdowns in a game. The most recent was Aaron Murray vs. New Mexico State in 2011.

“He's always had great composure, great athletic ability and a great understanding of the game," coach Kirby Smart said. “He's meant a lot to this program. All he does is do his job each and every day."

Daniels was sidelined by an oblique injury, which is not believed to be a long-term problem. He was in uniform on the sideline, but the Bulldogs had no reason to risk a more serious issue by playing him against a team that was a 25 1/2-point underdog.

Once Daniels was ruled out, Smart made a bit of a surprising call on the starter. Redshirt freshman Carson Beck was listed as No. 2 on the depth chart, but the Bulldogs went with the more experienced signal-caller.

While some fans groaned when Bennett was introduced as the starter, remembering his up-and-down results in 2020, there were nothing but cheers after he lit up the Blazers (1-1).

Georgia scored touchdowns on six of seven possessions with Bennett in the game.

“It depends on JT's injury, it depends on how we practice during the week," Smart said. “It's a day-to-day evaluation. I don't get into hypotheticals.”

The Bulldogs' defense wasn't too shabby, either. The unit has yet to allow a touchdown this season while scoring two itself, following up a pick-six against Clemson with another on Jamon Dumas-Johnson's 21-yard interception return for a score.

UAB was held to 174 yards overall on a miserable day for quarterback Tyler Johnston III, who completed just 6 of 14 for 39 yards with three interceptions.

“Give Georgia all the credit. They are super talented," UAB coach Bill Clark said. "They have a great defense and their special teams are unreal. There is no doubt that they are deserving of that No. 2 ranking.”

The Blazers avoided a shutout when Keondre Swoopes picked off a pass from Beck and returned it 61 yards for a score.

Beck did throw the first TD pass of his college career, a 12-yarder to Justin Robinson.

UAB: The Blazers have won two of the past three Conference USA titles, but they're not ready to compete with a team at Georgia's level.

Georgia: If nothing else, the Bulldogs feel great about their quarterback depth. It's a far cry from 2020, when Georgia spent much of the season trying to settle on a starter.

After his touchdown catch, Smith was ruled out for the rest of the game with contusion to his lower right leg.

Bowers has quickly become a key player in the Georgia offense, providing the sort of big-play ability that Smart wants from his tight ends.

“We just felt like he was a special player,” the coach said. “We need tight ends like him to be elite.”

None at all. Georgia will surely remain a solid No. 2 pick in The Associated Press poll behind top-ranked Alabama.

UAB: Travels to North Texas next Saturday for its first C-USA game of the season. The Blazers play their first four contests away from home before their new stadium in downtown Birmingham opens on Oct. 2 against Liberty.