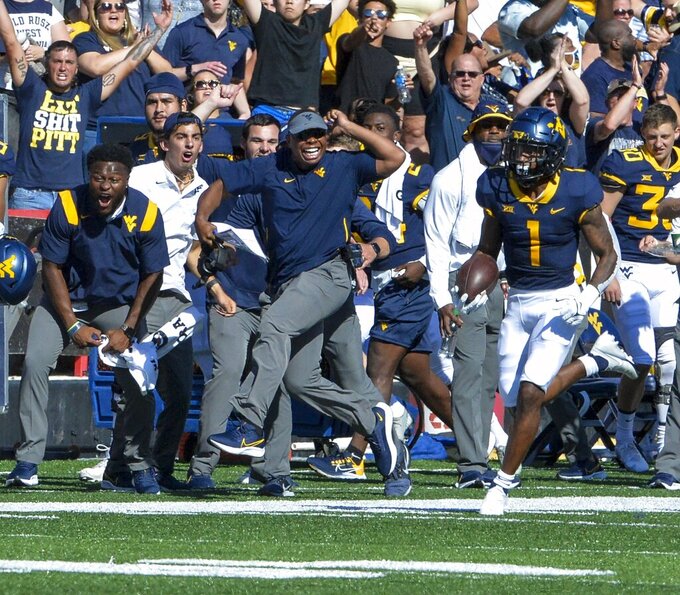 With his brother Tua on the sideline watching, Tagovailoa threw touchdown passes of 66 yards to Dontay Demus, 18 yards to Chigoziem Okonkwo — and then a 60-yarder to Rakim Jarrett in the fourth quarter that gave the Terrapins a 30-21 lead.

“It's always good to have family at my games, knowing that I'm far away from home,” Tagovailoa said. “Especially my brother. He's my role model.”

West Virginia turned the ball over four times and lost despite holding Maryland without a first down the in third quarter. Leddie Brown scored three touchdowns for the Mountaineers, but his fumble late in the third was a turning point.

“The biggest statistic in football that tells whether you win or lose is turnovers,” West Virginia coach Neal Brown said. “We had four that directly went for 10 points. They had zero. If you don’t turn the ball over, you usually win. It’s not overly complicated.”

West Virginia led 21-20 at the time, but after Brown's fumble in Maryland territory, the Terrapins drove for a field goal. The Mountaineers then drove into the red zone, but Jarret Doege was intercepted in the end zone.

West Virginia, which had the top-ranked pass defense in the nation last year, then left Jarrett alone in the secondary for Tagovailoa's third TD throw.

These two nonconference rivals were meeting for the first time since 2015. The Mountaineers had won nine of the previous 10 matchups.

Brown gave West Virginia a 7-3 lead with a 20-yard reception from Doege, but Maryland answered less than a minute later when Demus got behind the defense for his long touchdown.

It was 17-7 after Okonkwo's touchdown, but Winston Wright returned the kickoff 98 yards, setting up a 2-yard TD run by Brown with 35 seconds left in the opening quarter.

The Mountaineers took the lead in the second on Brown's 9-yard scoring run.

West Virginia: That vaunted pass defense did not look good at all in the first quarter, although the Mountaineers did stiffen in the second and third. Turnovers were the story in this one. They eventually caught up with West Virginia.

Maryland: This was a bright start to the season for Tagovailoa, who is in his second year leading the Terrapins. And he has some talented receivers to throw to.

Tayon Fleet-Davis broke a 53-yard run for Maryland toward the end of the game, which made the Terrapins' rushing stats look solid after they struggled in short-yardage situations for much of the game. Maryland finished with 164 yards on 44 carries.

“I think we committed to running the football,” coach Michael Locksley said. “We got into some advantageous third-down situations.”

The Terrapins were 3 of 13 on third down through the first three quarters, then went 5 of 7 in the fourth.

Wright had 217 yards on five kick returns. In addition to his near-touchdown in the first half, he also had a 48-yard return in the fourth quarter after West Virginia had fallen behind 23-21.

“I just did what I was coached to do all week,” Wright said. “The scheme worked.”