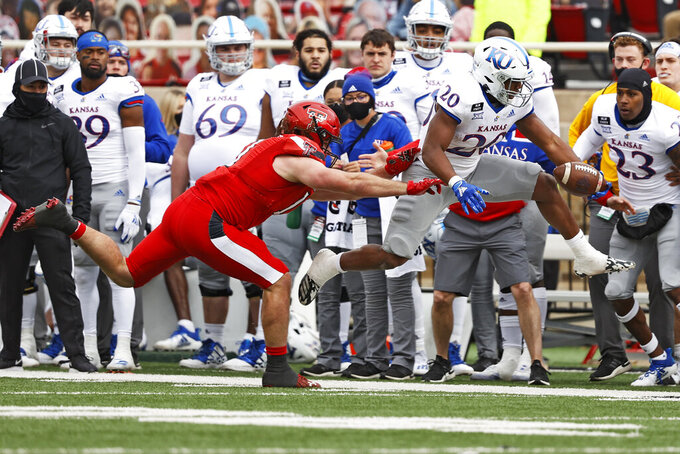 LUBBOCK, Texas (AP) — Texas Tech linebacker Colin Schooler says the “next man up” approach in this COVID-19 college football season applies to coaches as much as players.

The Red Raiders overcame four turnovers to prove it.

Receiver Myles Price took a reverse 70 yards for Texas Tech's only touchdown and Jonathan Garibay kicked a go-ahead field goal in the fourth quarter of a 16-13 victory over winless Kansas on Saturday with coach Matt Wells watching from home after testing positive for the virus.

Defensive coordinator Keith Patterson filled in, and his defense stopped Kansas (0-9, 0-8 Big 12) on fourth down four times, including twice in the final five minutes to preserve the victory.

“We preached that the whole entire season is that you never know what’s going to happen,” Schooler said. “It could be a player, it could be a coach, it could be whatever. When somebody does go down, it’s got to be the next man up. This whole week, or toward the end of this week, was a primary example of us doing that.”

Wells tested positive Thursday but wasn't officially ruled out until testing positive again Friday. He was in touch with Patterson as late as an hour before the game going over scenarios.

“It wasn’t really weird,” said Patterson, who was interim coach for Pittsburgh in a bowl game against SMU during the 2011 season. “You never know what situations and scenarios are going to come up. And not a lot of time to school yourself in 48 hours. We had great leadership, great coaches on our staff. I just leaned heavily on those guys.”

Xavier White had 135 yards rushing and 28 receiving for Texas Tech (4-6, 3-6), and Garibay kicked three field goals. The decisive kick went through from 36 yards with 5:36 remaining despite Caleb Sampson getting a hand on it.

Kansas had two opportunities to tie it in the final five-plus minutes — for a chance to win in Lubbock for the first time since 2001 — but managed just eight plays in two drives.

The first stop came from defensive back Eric Monroe, who stuffed Daniel Hishaw Jr. on fourth-and-1. After Garibay missed a 45-yarder that would have pushed the lead to six, Kansas went four-and-out again, with Miles Kendrick throwing incomplete on fourth-and-4 from the Kansas 34.

Alan Bowman was 15 of 26 for Texas Tech while Kendrick completed 17 of 29 as the pair combined for just 219 yards passing.

Hishaw had 87 yards rushing, including a 12-yarder for Kansas' only TD to pull the Jayhawks even at 13 early in the fourth quarter.

Kansas scored 10 points off Texas Tech turnovers after entering with just 10 points in that category all season.

Kansas: The losing streak of true Big 12 road games will live for another season, now up to 54 games after five losses this season. This was the first time the outcome was in doubt in the closing minutes. KU's average margin of defeat in the other four Big 12 road games was 37 points. The Jayhawks' last road win was Oct. 4, 2008, 35-33 at Iowa State.

Texas Tech: The Red Raiders haven't made much progress in Wells' second season, but they will take note of a 4-2 record at home as they go into 2021 looking to stop a five-year run of losing seasons.

There was a scary moment early in the game when Kansas freshman linebacker Taiwan Berryhill, who made his first career start, had a collision with a teammate when trying to make a tackle.

Berryhill, among the nation-leading 26 freshmen to play for Kansas going into this game, grabbed his head with both hands after taking a shot. His head collided with safety Kenny Logan Jr. when both were trying to tackle White.

Both defenders stayed down on the field for several minutes, though Logan was helped to the sideline before Berryhill was immobilized and taken off the field on a cart.

A school spokesman said Berryhill was cleared after precautionary tests at a hospital, returned to the stadium and was on the sideline in street clothes. Berryhill flew home with the team. While not offering any specifics, Miles said the injury appeared to be temporary rather than longer term.

Kansas is home next Saturday against Texas in the makeup of their postponed Nov. 21 game.

Texas Tech goes into another uncertain offseason, though there is still an outside chance of getting one of the Big 12's bowl spots since there is no minimum win requirement this season.