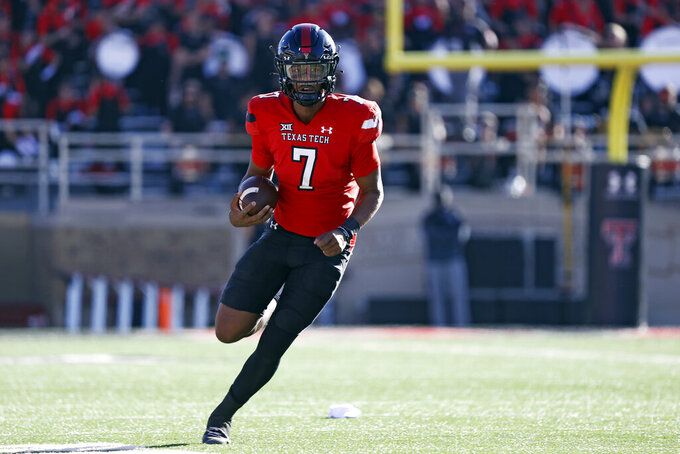 Texas Tech's Donovan Smith (7) runs with the ball during the first half of an NCAA college football game against Iowa State, Saturday, Nov. 13, 2021, in Lubbock, Texas. (AP Photo/Brad Tollefson)

LUBBOCK, Texas (AP) — Jonathan Garibay was trying kicks beyond midfield before Texas Tech's game against Iowa State, but told coaches his range wasn't quite that far.

They sent him out for one from the other side of the 50 anyway.

Garibay kicked a 62-yard field goal as time expired, lifting the Red Raiders to a 41-38 victory over Iowa State on Saturday after they squandered a 17-point lead in the second half.

Garibay sprinted across the field with his helmet off as fans stormed the field to celebrate the walk-off win after the longest field goal in FBS this season, surpassing a 60-yarder by Oregon State's Everett Hayes last week.

The senior from California broke the Texas Tech record of 57 yards by Blade Adams against Texas A&M in 1977.

The Cyclones had pulled even on Andrew Mevis' 29-yard kick with a minute remaining before redshirt freshman Donovan Smith, making his first career start, got the Red Raiders just far enough to set up Garibay, whose previous career long at Texas Tech was 48 yards.

Garibay has made 12 of 12 field goals this season.

“When you get to a distance that far, it’s really hard to give it that nice height,” said Garibay, who had the longest kick in the Big 12 since 1999. “You’ve kind of got to drive it. I thought the wind’s not blowing, don’t try to kill this ball. I’ve got to hit a clean ball and hopefully it goes all the way.”

The Red Raiders (6-4, 3-4 Big 12) won for the first time under interim coach Sonny Cumbie in his second game. Texas Tech earned bowl eligibility for the first time since 2017 the same week Joey McGuire was named to replace Matt Wells, who was fired in the middle of his third season.

Breece Hall had three touchdowns, including two on the ground to extend his Iowa State and Big 12 records to 22 consecutive games with a rushing TD. But the Cyclones (6-4, 4-3) lost any realistic chance of playing in the Big 12 championship game after starting the season in the top 10.

“We’ll have to see how we respond,” coach Matt Campbell said. “I think that’s one thing I really appreciate about our senior class is they’ve had the ability to persevere through hard and persevere through tough. We’ll have to follow our leaders the way we have since the start of November, and I have complete faith in those guys.”

After Mevis' tying kick, the Red Raiders drove to a first down at the Iowa State 46 with 8 seconds to go and wanted to get closer. Another incompletion left them with three seconds, and Cumbie chose the kick over a Hail Mary try.

Iowa State lined up a player in the back of the end zone for a possible return if the kick came up short, but it sailed over his head and cleared the crossbar by a few yards.

“When Jon's out there, I don't look at the kick, I just watch him,” Cumbie said. “It's like a golfer. When you watch a golfer you just watch their body language and their reaction. If they hold the pose, they've got a pretty good shot. I watched him drill that sucker, and there was never a doubt in his mind that he was going to make that field goal."

Smith was 25 of 32 for 322 yards and three touchdowns, two to Eric Ezukanma. Myles Price had career highs of nine catches and 175 yards with a 39-yard score.

Purdy fueled a big second half for the Iowa State offense, finishing 32 of 42 for 356 yards and three TDs with two interceptions. Xavier Hutchinson had eight catches for 112 yards, while Kolar had eight grabs for 76 yards and his two scores.

“Precision and detail was much better in the second half than it was in the first,” Campbell said. “You dig a hole like we dug the first half, and you’re literally going to have to win each possession. We just came up a hair short.”

Iowa State: While the comeback was impressive, the Cyclones twice failed to capitalize on momentum-building wins that could have kept them in the race for the Big 12 title game. After handing No. 10 Oklahoma State its first loss, Iowa State fell to West Virginia. This defeat came after dominating Texas at home.

Texas Tech: Cumbie never ruled out Tyler Shough at quarterback, but the Oregon transfer who began the season as the starter didn't suit up. Shough hasn't played since breaking a collarbone in the 70-35 loss to Texas on Sept. 25. If Shough and/or Henry Colombi (illness) are cleared, Cumbie will have an interesting decision.

Iowa State: Back on the road next Saturday at Oklahoma, which could tumble out of the top 10 from No. 4 after a 27-14 loss at 18th-ranked Baylor.