Tide's Robinson ready to ramp up run game against Cincinnati 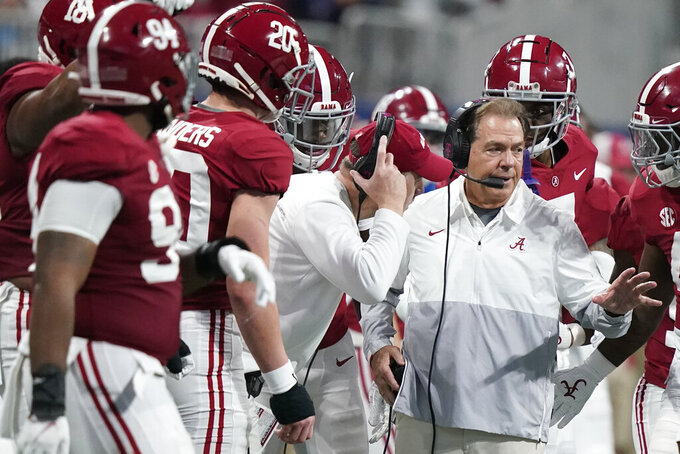 With a Heisman Trophy-winning quarterback and All-America receiver leading its offense, Alabama's running game has been understandably overshadowed in the buildup for the College Football Playoff semifinal against Cincinnati.

Bryce Young and Jameson Williams have put up huge numbers through the air. The Crimson Tide's ground production, meanwhile, has ranked among the lowest in Nick Saban's 15 years as coach.

That doesn't mean the rushing game won't play a major role in the Cotton Bowl.

“I believe the running game will be equally as important as the passing game,” offensive lineman Evan Neal said. “I believe we want to go out there and keep a well-balanced scheme. As an offensive lineman, you want to run the ball. You want to put it on the hogs, as I say.”

Alabama has run just as much as it has in recent seasons when it had stars like Heisman Trophy winner Derrick Henry, Damien Harris and Najee Harris.

But the Crimson Tide has had to deal with inconsistent line play and glut of injuries to ball carriers this season. Its average of 147.6 rushing yards per game ranks 79th nationally and is the lowest of the Saban era. The 4.1 yards per carry is 80th and worst since Saban's first Alabama team averaged 4.0.

As it has all season, Alabama will lean heavily on Brian Robinson Jr. He grew up not far from the 'Bama campus in Tuscaloosa and had to wait until his fifth year to become the featured back.

Robinson's tough, shifty running style has netted 1,071 yards and an SEC-best 14 touchdowns despite his missing one game and part of another because of injuries. He played hurt in other games as well and still managed to carry the ball 223 times, second most in the Southeastern Conference.

“Alabama’s always going to have running backs that you really have to be concerned with that will run physical,” Cincinnati defensive coordinator Mike Tressel said, “so that doesn’t change.”

Alabama's only other available scholarship running back against Cincinnati is sophomore Trey Sanders, who has run for 242 yards and two touchdowns.

Jase McClellan had been the top backup before going down with a leg injury against Mississippi on Oct. 2. Roydell Williams was lost to a season-ending knee injury against New Mexico State on Nov. 13. Five-star freshman Camar Wheaton hasn’t played all season because of a knee injury.

Receiver Christian Leary and linebacker Demouy Kennedy have worked some at running back in case of an emergency.

All things considered, Robinson said, things haven't been so bad.

“In our running game, I think we’ve improved tremendously throughout the season,” he said. “We’ve had lots of ups and downs with guys, injuries at all positions. Offensive linemen kind of having to move around a lot, play different positions. And the running back depth, just having a few guys not with us to finish out the season, we had to make a lot of adjustments."

Having almost four weeks between the SEC championship win against Georgia and the national semifinal has helped Robinson recover from the wear and tear of the season.

He knows he'll be needed against Cincinnati.

“The running game will always be important in big games like this,” he said. “I’m sure many people might not understand that part of it, but the running game has to work and it has to be a key factor in our game in order for it to open up the passing game for us.”