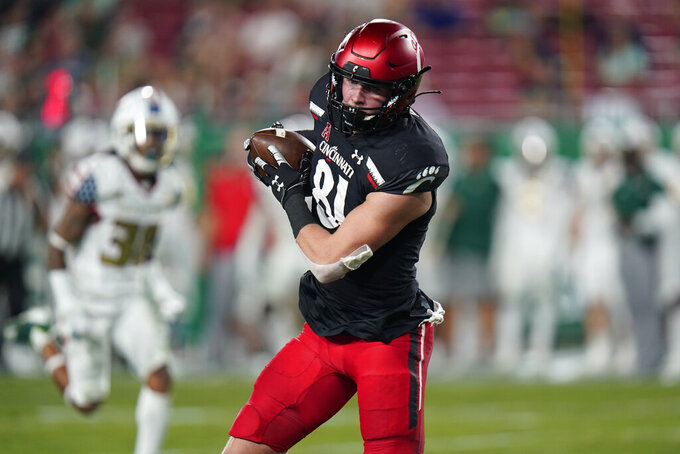 FILE - Cincinnati tight end Josh Whyle makes a catch against South Florida during the first half of an NCAA college football game Friday, Nov. 12, 2021, in Tampa, Fla. College teams haven't quite unlocked the full potential of the position as effectively as the pros, but Friday, Dec. 31 College Football Playoff with No. 1 Alabama facing No. 4 Cincinnati in the Cotton Bowl will put players with potential to be part of the next wave of dominate tight ends on display. (AP Photo/Chris O'Meara, File)

Great pass catching tight ends have always been a part of football, but the position and players who play it have evolved to the point where they are often the most difficult matchup on the field.

The NFL is in the midst of tight end boom, with players such as Travis Kelce, Mark Andrews, Zach Ertz and Rob Gronkowski frequently taking over games.

College teams haven't quite unlocked the full potential of the position as effectively as the pros, but Friday's College Football Playoff with No. 1 Alabama facing No. 4 Cincinnati in the Cotton Bowl and No. 2 Michigan playing No. 3 Georgia in the Orange Bowl will put players with potential to be part of the next wave of dominate tight ends on display.

“The bottom line is the size and speed combination, the size and speed and skill combination that people put out at those tight end positions where they can play as a wide receiver or get in the box and be physical, yeah, that makes life tough,” Cincinnati defensive coordinator Mike Tressel said earlier this week.

Michigan and Georgia have combined this season to play 46% of their offensive snaps with multiple tight ends on the field, according to data tracked by Sports Info Solutions.

The Bulldogs run 48% of their offense from two or three tight end sets, and in a season where injuries took a toll on their wide receivers, freshman tight end Brock Bowers emerged as their leading receiver and a second-team All-American.

The Northern California native caught the Georgia coaching staff's attention even before he officially signed by sending them videos of himself running hills in the Napa Valley during the pandemic shutdowns in 2020.

“We knew he had the run-after-catch ability," Georgia offensive coordinator Todd Monken said. "They used him in the backfield out of high school, but he’s got a little more range than we thought and he’s continued to develop as a route runner.”

Michigan coach Jim Harbaugh fondly tells the story of his college coach, the late Bo Schembechler, being so pleased to hear that as three- and four-receiver sets were becoming more prevalent in the early 2000s, tight ends still played a prominent role in Harbaugh's attack.

The Wolverines have had two or three tight ends on the field for 43% of their snaps this year. Offensive coordinator Josh Gattis' version of the spread is run-heavy. Michigan's tight ends are blockers first and foremost, but far from exclusively.

Erick All is second on the team with 34 receptions and is responsible for maybe the single most important pass play of Michigan's season: He went 47 yards for a go-ahead touchdown in the fourth quarter of a 21-17 victory at Penn State in November.

“Coach Gattis has done a great job with getting us all involved with so many ways to attack defenses,” Michigan’s Luke Schoonmaker said.

Alabama and Cincinnati have not been quite so tight end dependent, combining to run 31% of their offensive plays with two or three on the field, but they seem to be trending toward bigger roles for the tight ends in the Cotton Bowl.

Cincinnati's Josh Whyle came into the season billed as the school's next big-time tight end prospect following Kelce and Brent Celek, but he had just seven catches in the first six games.

“We remained who we were. I remained who I was. I just said throughout the season that I just try to be in the right spots at the right times and I know (quarterback Desmond Ridder) will find me eventually,” Whyle said.

Whyle had 18 catches and five touchdowns in the final seven games. Whyle and the 6-5, 250-pound Leonard Taylor have combined for 10 touchdown catches.

Considering the problems Alabama had dealing with Bowers in the Southeastern Conference championship game (10 catches for 139 yards), Whyle and Taylor could see an uptick in targets on Friday.

Alabama could also turn to its tight ends more against Cincinnati to make up for the loss of second-leading receiver John Metchie, who is out with a knee injury. Cameron Latu is a 6-5, 250-pound converted defensive end who has six touchdowns among his 20 catches for 299 yards.

“I would expect Cameron Latu and Jahleel Billingsley to have a much bigger role in this game in the passing game ... because I think a lot of attention, and rightfully, so will be paid to (All-America receiver) Jameson Williams," Blackledge said, "and I think those two tight ends for Alabama have a chance to be a big factor.”