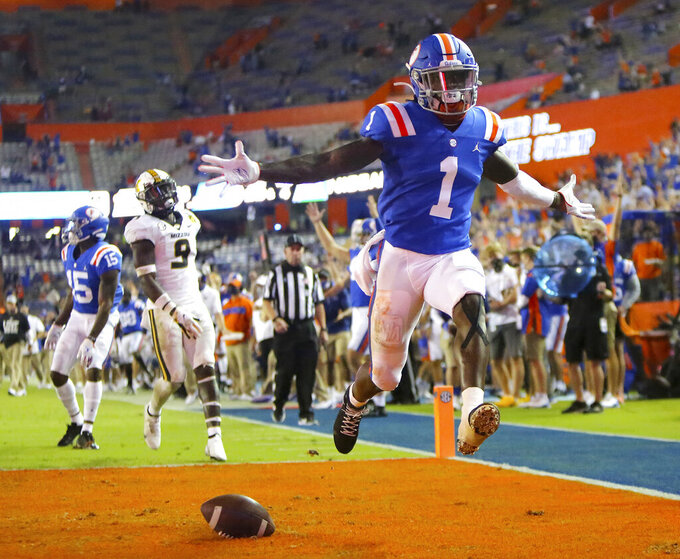 Mullen insisted it was the only Halloween costume in the facility, not a conscious decision to play a villain.

Nonetheless, it may have been the perfect role given Mullen's past few weeks.

Kadarius Toney scored three times, Kyle Trask became the first player in school history with four touchdown passes in four consecutive games and the 10th-ranked Gators returned from a three-week layoff to handle Missouri 41-17 on Saturday night in the Swamp.

The Gators’ easiest win of the season came after a COVID-19 outbreak forced the Southeastern Conference to postpone two of their games. It also included a benches-clearing scuffle at halftime that involved both coaches.

Several players threw punches during the melee, but just three were ejected. The conference could hand down more punishments following a review.

It could be costly for Florida (3-1), which plays rival and fifth-ranked Georgia next week in nearby Jacksonville. The game is likely to decide the winner of the East Division.

“Everyone’s running to the locker room and it keeps spilling down that way,” said Mullen, who was ripped nationally for wanting 90,000 fans at home games and then tested positive for COVID-19 days later. “Really unfortunate situation. It’s not something we condone, obviously. It’s not something that you really want to see in the game at all.”

The fight started when Missouri’s Trajan Jeffcoat delivered what looked like a high, late hit on Trask after he released a Hail Mary at the end of the second quarter. The ball fell incomplete, and Trask landed hard on his back. His linemen came to his defense. So did Mullen, who started screaming at the officials and in the direction of the opposing sideline.

Players from both teams converged near Missouri’s side of the field, and wild punches could be seen flying and connecting.

“I don’t know why they were running over to our hash,” Drinkwitz said. “I have no idea what they were yelling about. We’ll take a look at the film and I’m sure we’ll find out more tomorrow when we watch the tape. Film doesn’t lie.”

Mullen had to be pulled away several times and was so irate by the end of the exchange that he came back out of the tunnel for a rousing curtain call.

The rest of the players received unsportsmanlike conduct penalties, meaning another would get them ejected. Both coaches credit their players for not letting the spat spill into the second half.

The Gators were up 20-7 at that point, mostly because of the Trask-to-Toney combination.

Florida started slow — showing the rust Mullen anticipated after a two-week quarantine shut down practices and in-person meetings — but found its rhythm with consecutive scores that spanned 33 seconds late in the second.

Toney was on the receiving end of both, turning a screen pass into an unlikely touchdown after slipping out of linebacker Nick Bolton’s grasp. Florida forced a fumble on the ensuing play, and Toney was at it again. He burned safety Joshuah Bledsoe at the line of scrimmage and Trask found him running wide open down the middle for a 30-yard score.

Toney added a 16-yard TD run in the third quarter. He finished with four receptions for 60 yards and three carries for 23 more.

The Tigers (2-3) scored their first touchdown on Jarvis Ware’s 59-yard interception return in the second quarter. Trask was hit on the play. They scored again in garbage time.

Missouri: The Tigers won a shootout against LSU three weeks ago, but don’t appear poised to do it again. They finished with 255 yards against the Gators, with freshman quarterback Connor Bazelak losing for the first in four starts.

Florida: The Gators have lost three straight to Georgia and probably need to end the streak to reach the SEC title game for the first time in four years.

Florida played without several starters, including three-fifths of its secondary and place-kicker Evan McPherson.

Cornerback Marco Wilson and both starting safeties, Donovan Stiner and Shawn Davis, were sidelined because of either COVID-19 test results or contact tracing. So was backup cornerback Chester Kimbrough.

Missouri has its second and final bye week before hosting No. 5 Georgia on Nov. 14, the first of five consecutive league games.

Florida plays Georgia in the World’s Largest Outdoor Cocktail Party, which will be limited to about 18,000 fans. The teams will get approximately 9,000 tickets each.