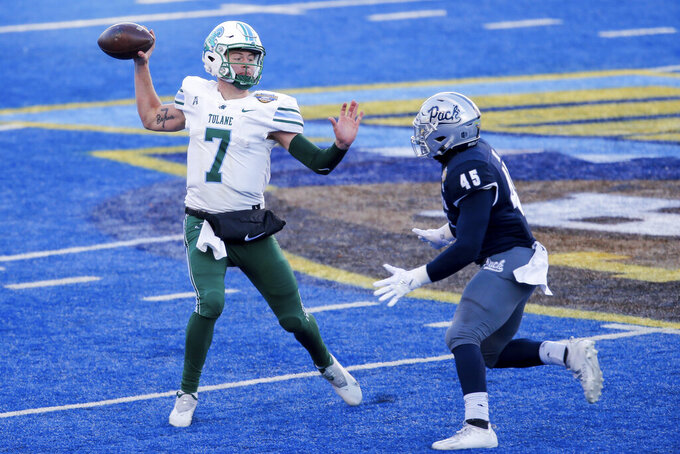 FILE - In this Dec. 22, 2020, file photo, Tulane quarterback Michael Pratt (7) looks to throw the ball as Nevada linebacker Trevor Price (45) closes in during the second half of the Famous Idaho Potato Bowl NCAA college football game in Boise, Idaho. Pratt and Tulane face Oklahoma this weekend in a game moved from New Orleans because of Hurricane Ida. (AP Photo/Steve Conner, File)

The Sept. 11 matchup with Morgan State will be the second home game the Green Wave has been forced to relocate because of the storm this season.

Tulane was supposed to open its football season at home Saturday against No. 2 Oklahoma, which would have been the highest-ranked team to play at Tulane since second-ranked LSU met the Green Wave in the Superdome in 2007. But that game was moved to Norman, Oklahoma, shortly after it became evident that Ida's damage — which included power outages citywide — would prevent Tulane from hosting a football game on campus this weekend.

The game was scheduled for Tulane's Yulman Stadium, which has never hosted such a high-profile opponent since it opened in 2014.

Tulane also announced that fans will be admitted free of charge to all of its sporting events held in Birmingham, including the football game and a volleyball tournament including UAB, Sam Houston and Texas Tech on Sept. 17 and Sept. 18.

Tulane officials said game times and locations for future Tulane events will be reassessed after Sept. 18.