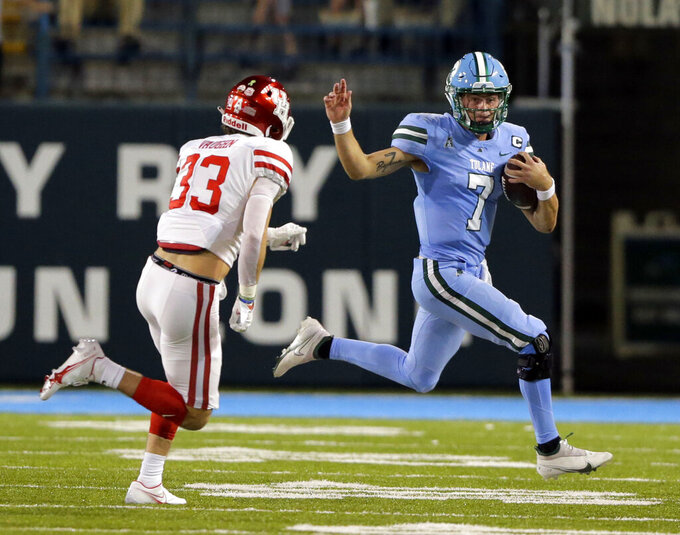 Tulane quarterback Michael Pratt (7) scrambles out of the pocket during first-half play against Houston during an NCAA college football game in New Orleans, Thursday, Oct. 7, 2021. (A.J. Sisco/The Advocate via AP) 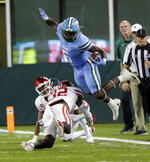 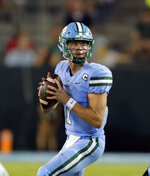 NEW ORLEANS (AP) — Clayton Tune passed for 288 yards and three touchdowns, including a go-ahead score late in the third quarter to Jeremy Singleton as Houston rallied past Tulane 40-22 on Thursday night.

Tune threw a pair of first-quarter touchdown passes of 11 yards to Christian Trahan and 17 to Singleton to spot the Cougars (5-1, 3-0 American Athletic Conference) to a 14-0 lead.

Tulane (1-5, 0-2) scrapped back with Tyjae Spears weaving 39 yards for a touchdown late in the first half, pulling the Green Wave within 17-15. Just after halftime, Michael Pratt hooked up with Will Wallace on a 29-yard scoring pass as Tulane grabbed a 22-17 lead.

The lead lasted just about seven minutes before Tune led a pair of Houston drives that ended in a Da Williams field goal and his second TD pass to Singleton as the Cougars reasserted themselves, 26-22.

Houston added two more scoring drives in the fourth quarter, including an eight-yard touchdown run by Ta'Zhawn Henry to make it 33-22 and ice the game. Eight receivers made 23 catches for 288 yards with Kesean Carter gaining 69 and Singleton 62.

Pratt was 20 of 30 passing for Tulane for 214 yards and a pair of touchdowns but was sacked eight times for a loss of 48 yards.