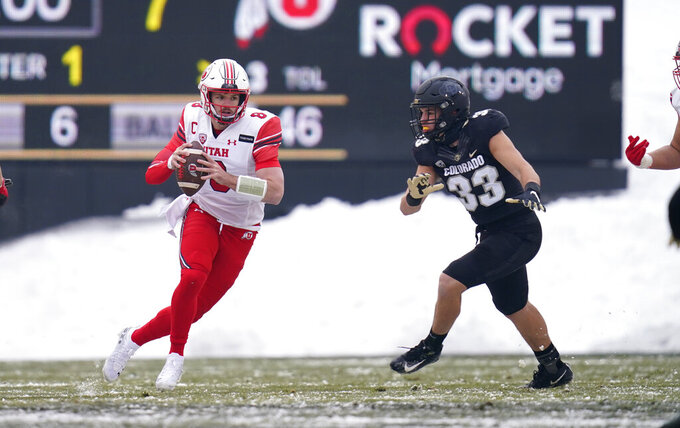 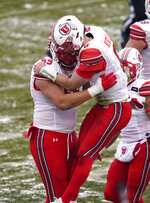 BOULDER, Colo. (AP) — The Utah Utes got up and at 'em early — courtesy of a blaring fire alarm at their hotel.

From there, they just kept rising to the occasion.

Ty Jordan scored twice, including a game-sealing 66-yard TD burst, and Utah’s revamped defense forced three turnovers to help the Utes rally past No. 21 Colorado 38-21 on a snowy Saturday to thwart the Buffaloes’ Pac-12 title hopes.

The soon-to-be-unseated Pac-12 South champion Utes (2-2, 2-2 Pac-12) found their footing on the slippery field in the second half, turning around 21-10 deficit by scoring 28 unanswered points.

“They hung in there and fought their way out of a tough spot,” Utah coach Kyle Whittingham said. “They never flinched.”

About that 6:30 a.m. fire alarm: They jokingly had their suspicions. A strength coach, perhaps, wanting to make sure they were alert. Quarterback Jake Bentley had a theory, too, one involving receiver Britain Covey as they played in the earliest kickoff (10:05 a.m. local time) in Folsom Field history.

“I didn’t know if Britain set off fire alarm trying to make his morning coffee,” cracked Bentley, who threw for 240 yards and two TDs. “I applaud the guys for waking up and being ready to go.”

Colorado freshman receiver/returner Brenden Rice, the son of Hall of Fame receiver Jerry Rice, showed off his speed by scoring twice — on an 81-yard punt return and on a 61-yard catch off a bubble screen. But it wasn’t enough as the Buffaloes (4-1, 3-1, No. 21 CFP) suffered their first loss under new coach Karl Dorrell.

“It was a disappointing game,” Dorrell said. “Not quite the performance we were looking for.”

As things currently stand, it ends Colorado's Pac-12 title aspirations. The Buffaloes needed a win along with UCLA beating No. 16 Southern California later Saturday to capture the South. There could be a modification by the league given the cancellation of Washington (3-1, 3-1) and Oregon (3-2, 3-2) due to COVID-19 cases in the Huskies’ program. That game was set to determine the North champion.

Colorado's last appearance in the Pac-12 title game was 2016, when the team beat Utah in the regular season finale to wrap up a spot.

Jordan helped wrap up this game with his long scoring run with less than five minutes remaining. Just before that run, Utah's defense came up big by deflecting Sam Noyer's pass on fourth-and-5 at the Utes 34.

The Utes relished their spoiler role.

“This is the first time in my career where we’re not playing for a championship or the opportunity to go to a championship,” said Covey, who had a 20-yard TD catch. "You've got to dig deep and find what motivates you."

This may be a decision the Buffaloes lament: A fumble on a conservative run play while trying to run out the clock with less than 30 seconds remaining until halftime. The Utes turned Jarek Broussard's miscue into a 42-yard field goal by Jadon Redding as time expired to give the offense a little confidence boost.

Jordan shined in a matchup between two highly touted tailbacks. The freshman finished with 147 yards rushing.

His counterpart, Broussard, started slow but finished with 80 yards, which was well below his 183.3 average.

The Buffaloes suffered a huge blow in the first half when they lost linebacker Nate Landman to what could be a season-ending ankle injury. Using a scooter and wearing a leg brace, the emotional leader of the team returned to the sideline.

His absence was felt in the second half.

Rice gave the Buffaloes a 14-7 lead late in the first half with Colorado’s first punt return for a score since Sept. 9, 2017. He also scored on a bubble screen to put the Buffaloes up 21-10 moments in the the third quarter.

The last Colorado player to record a TD on both a reception and a return (punt or kickoff) in the same game was Walter Stanley against Texas Tech on Sept. 12, 1981, according to the school.

Rice's feat felt bittersweet in light of the loss.

“Kind of hurts," Rice said, "because we were doing so well all season.”

Utah: The Utes notched their fourth straight win over the Buffaloes.

Colorado: After holding San Diego State and Arizona to no points in the second half, Colorado surrendered 28 against Utah.

It looks like a one-week stop in the poll for the Buffaloes.

“That’s not the best we can play," Colorado safety Derrion Rakestraw said.

The game was moved from Friday night to Saturday morning to take the place on television of the Michigan-Ohio State contest, which was canceled due to COVID-19 issues within the Wolverines program.

Utah: Scheduled to play a crossover game against the North Division next weekend. The opponent and place has yet to be determined.

Colorado: To be determined. Could be a crossover game with a North opponent next weekend.