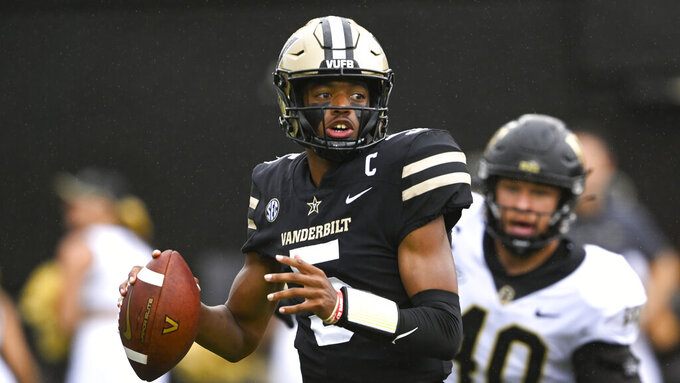 Line: Northern Illinois by 2½, according to FanDuel Sportsbook.

A win would be an improvement over the two victories coach Clark Lea managed in his debut season with Vanderbilt last season. The timing of Vanderbilt’s final nonconference game this season makes a victory even more important because the Commodores start their Southeastern Conference slate Sept. 24 against Alabama. Vanderbilt is coming off a 45-25 loss to Wake Forest. Reigning MAC champion Northern Illinois starts a two-game stretch against the SEC, with a trip to Kentucky next week. The Huskies are trying to bounce back after losing 38-35 at Tulsa on a touchdown in the closing seconds.

QB Mike Wright against Northern Illinois' secondary. Wright had a rough game last week, completing just 8 of 15 passes for 35 yards with an interception that was returned for a touchdown. Freshman A.J. Swann took over late in the third quarter and threw for 146 yards and two touchdowns.

Vanderbilt: QB Mike Wright. The third-year player had been off to one of the best starts by a Commodores quarterback in years with 10 TDs this season including six passing and four rushing scores. He ranks third nationally and leads the SEC in that category. Wright was pulled last week for freshman A.J. Swann late in the third quarter after a couple turnovers.

Northern Illinois: QB Rocky Lombardi. Coming off a solid outing at Tulsa, Lombardi will try to keep it going against a defense giving up about 435 yards per game. Lombardi, in his second season at Northern Illinois after three at Michigan State, threw for three touchdowns last week, completing 18 of 31 passes for 259 yards.

The Commodores are 6-1 over their past seven road nonconference games. That includes a rout at Hawaii to open the season. ... Vanderbilt senior RB Ray Davis is averaging 89.7 yards per game. ... Vanderbilt WR Will Sheppard has five TD catches this season and is tied for the first nationally. He has a streak of at least one TD catch in four straight games dating back to last season. ... Vanderbilt Jayden McGowan ranks second among FBS freshmen with 67 yards receiving per game, a team-high. ... Vanderbilt is the only FBS team with three straight games against teams that played conference championship games last season. The Commodores lost to Wake Forest (ACC) last week. Up after MAC champ Northern Illinois is defending SEC champ Alabama. ... Northern Illinois is hosting an SEC team for the second time. Vanderbilt won in DeKalb, Ill., in 1997. ... The Huskies have been outgained an average of 435 yards to 382 through the first two games — a win over Eastern Illinois and a loss at Tulsa.