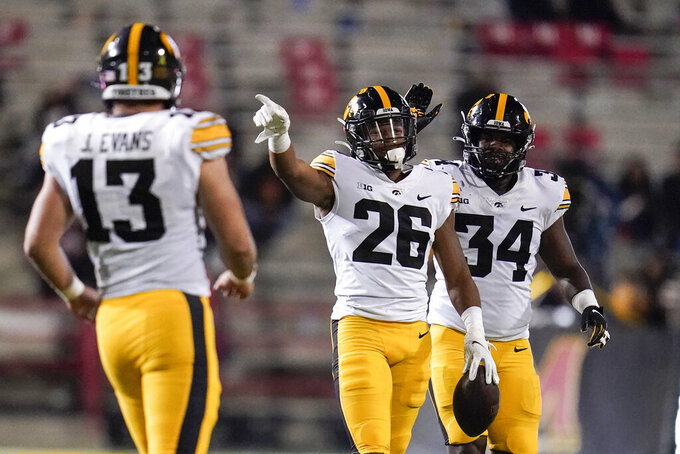 FILE - Iowa defensive back Kaevon Merriweather (26) reacts after making an interception on a pass from Maryland quarterback Taulia Tagovailoa, not visible, during the second half of an NCAA college football game in College Park, Md., in this Friday, Oct. 1, 2021, file photo. Iowa defensive end Joe Evans (13) and linebacker Jay Higgins (34) look on. The key matchup in fourth-ranked Penn State's showdown with No. 3 Iowa pits the Nittany Lions' passing combo of Sean Clifford and Jahan Dotson against a defense that leads the nation with 12 interceptions. (AP Photo/Julio Cortez, File)

The last time UConn faced UMass was 2019 and it was a wild game.

The teams combined for 91 points and more than 900 yards as the Huskies beat the Minutemen 56-35. That was the last time UConn won a football game.

The Huskies bring a 10-game losing streak into the Saturday's game against UMass, which has lost 16 straight.

It won't be the best game of Week 6, but one of the longest losing streaks in the country will be broken and since neither team plays much defense it could be another wild one.

Elsewhere around the country, a top-five matchup in the Big Ten and the Big 12's biggest rivalry — at least for now —- highlight the schedule.

The first regular-season top-five matchup in the Big Ten that does not involved Michigan or Ohio State since a Wisconsin-Minnesota game in 1962 has both conference and playoff implications.

This probably won't be the prettiest game, with two of the Big Ten's best defenses facing offenses that have have various limitations.

The Hawkeyes have an 11-game winning streak in which they have allowed an average 12.8 points per game. The Nittany Lions come to Kinnick Stadium a week after shutting out Indiana and having held opponents scoreless on almost half their trips into the red zone.

Penn State senior Sean Clifford has been playing some of the best football of his career with 11 touchdown passes, but he'll need to be especially careful against an Iowa defense that leads the country in interceptions with 12.

The Red River Rivalry between No. 6 Oklahoma and No. 21 Texas matches one rising Heisman Trophy contender against another who is still looking for a breakout game.

Sooners quarterback Spencer Rattler has been good, completing 76.2% of his passes with 10 touchdowns and four interceptions, but not quite the Heisman favorite he was touted as entering the season.

There's still time for the sophomore to surge and no better to do it than against the rival Longhorns in a game that will go a long way toward sorting out the Big 12.

Meanwhile, Texas running back Bijan Robinson is second in the nation in rushing at 130.4 yards per game and has scored nine touchdowns.

0-9 —- Utah's record at Southern California. The Utes visit the L.A. Coliseum on Saturday.

14 —- Number of consecutive games against ranked teams Nebraska has lost. The Cornhuskers host No. 9 Michigan on Saturday.

100 — No. 1 Alabama's winning streak against unranked teams. The Tide can extend that streak at Texas A&M, which definitely wasn't what was expected when the Aggies started the season No. 6 in the country.

125 —- The number of times No. 3 Georgia and No. 18 Auburn have played in the Deep South's Oldest Rivalry. Game 126 will be Saturday on The Plains. It will be just the second since 1936 that the Bulldogs and Tigers will play outside the month of November.

1944 — The last year No. 19 Wake Forest started a season 6-0. The unbeaten Demon Deacons look for their sixth victory at Syracuse.

The Roadrunners are 5-0 and look like Conference USA's best team. The Hilltoppers are 1-3.

Don't be fooled, though. Western Kentucky's losses have come against Army and two Big Ten teams (Indiana and Michigan State).

The Hilltoppers have the nation's leading passer in Bailey Zappe, averaging 428 yards per game, and UTSA has C-USA's best defense.

Geoff Collins is in his third season trying to transition Georgia Tech (2-3) from the option team it had been under Paul Johnson.

It's time to show progress, but the Yellow Jackets have been wildly inconsistent. They have lost to Northern Illinois and beaten North Carolina. They played Clemson close in a low-scoring game and allowed 52 points in a blowout loss to Pittsburgh.

Georgia Tech goes to Duke on Saturday. The Blue Devils are 3-2, but that includes victories against Kansas, Northwestern and an FCS school.

This is a game Collins and Georgia Tech need if they're going to reach a bowl game.