What to Watch: No. 1 Alabama faces nemesis Texas 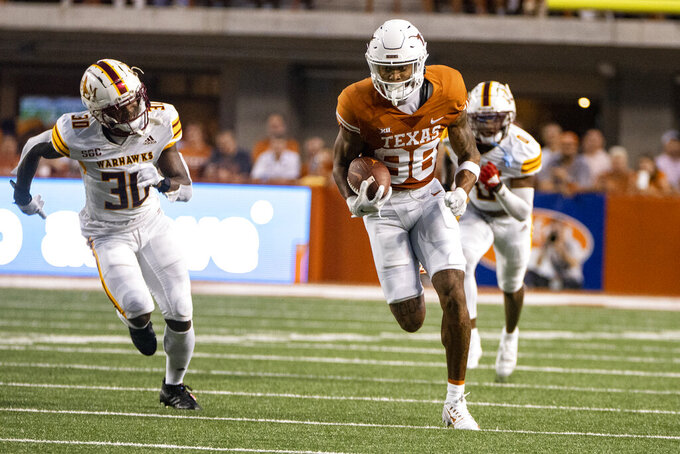 Opening weekend in college football is always a chance for teams to show that the expectations for them are warranted or perhaps a bit too optimistic.

Such was the case last weekend, and a predictable jumbling of the AP Top 25 rankings followed. More will be revealed this weekend with more marquee matchups.

The Southeastern Conference is in the heart of some of the most compelling matchups this week:

— No. 24 Tennessee can burnish its resume with a win at No. 17 Pittsburgh. The Vols will be trying to make some program history: In a series that dates to 1980, Pittsburgh is 3-0 against the Vols, including a 41-34 victory last year.

— Florida went from unranked to No. 12 — and became the eighth SEC team in the Top 25 — with its victory over then-No. 7 Utah, and coach Blly Napier's Gators will be tested again in The Swamp against No. 20 Kentucky. The Wildcats beat the Gators 20-13 last October.

Georgia, meanwhile, looked just fine even without all that talent lost to the NFL with a 49-3 victory against then-No. 11 Oregon, a rout that allowed Georgia to move past Ohio State to No. 2 in the Top 25 while sending the Ducks out of the rankings.

Georgia faces Samford's Bulldogs on Saturday, while the Buckeyes follow a 21-10 victory against No. 8 Notre Dame expecting to feast on Arkansas State.

Here is The Associated Press weekly What to Watch rundown, presented by Regions Bank:

Newly ranked Florida has a score to settle against Kentucky in Napier's SEC debut. Wildcats fans stormed the field after last year's victory, the first home win in the series for Kentucky since 1986 and their second victory in four years against the Gators after losing 31 straight in the series.

It's only the third time both teams are ranked heading into the game.

Honorable mention: No. 9 Baylor at No. 21 BYU. The only other matchup of teams in the Top 25, Baylor won last year at home against the Cougars, who will join the Bears in the Big 12 next season.

Now that Florida has vaulted into the rankings, dual threat QB Anthony Richardson figures to get a bit more attention. He threw for 168 yards and ran for 106 and three touchdowns in the victory over Utah, and his performance raised eyebrows even on a weekend where fellow contenders like Alabama's Bryce Young also had big games.

1 — The number of times Alabama has beaten Texas in nine prior meetings.

3 — Defensive touchdowns scored by Jackson State in its 59-3 victory against Florida A&M. Kev’Ric Wiggins returned an interception 35 yards for a score, Aubrey Miller Jr. returned a fumble 19 yards for a TD and Anthony Petty returned a blocked punt 17 yards for a TD.

The Trojans started strong under Lincoln Riley with their 66-14 win against Rice, but they've won just one of their past five visits to Palo Alto and are unlikely to get three interception returns for TDs against the Cardinal.

Georgia Tech shouldn't have been expected to beat No. 5 Clemson in its opener, but its 41-10 loss left coach Geoff Collins with a 9-26 career record. It has taken time to convert the Yellow Jackets from Paul Johnson's triple-option approach, but Collins could use some wins, starting with his team's game against Western Carolina on Saturday.