Winless Miami tries to bounce back against Bethune-Cookman 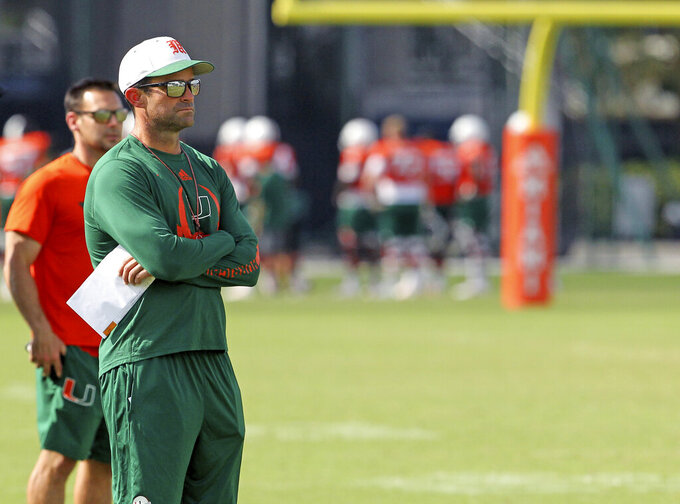 Miami Hurricanes head coach Manny Diaz looks on during practice at the University of Miami Greentree Practice Field in Coral Gables on Wednesday, September 11, 2019 in preparation for their home opener against Bethune-Cookman Wildcats on Saturday at Hard Rock Stadium.(David Santiago/Miami Herald via AP)

MIAMI GARDENS, Fla. (AP) — A meme on social media shows Miami Hurricanes first-year coach Manny Diaz holding a turnover chain in each hand, with a zero dangling from the links on his right, and a two dangling to his left.

The Hurricanes are off to their worst start since 1978 and are in desperate need of a win. Cue Saturday's opponent, the Bethune-Cookman Wildcats (1-0).

Here are things to know as Miami tries again to give Diaz his first victory:

The Hurricanes led in the fourth quarter on the road against Florida and North Carolina, but lost the two games by a total of seven points.

The season's start is not what Diaz envisioned when he replaced Mark Richt. But with the next five games at home, and only one Top 25 team left on the schedule, a turnaround is a distinct possibility.

"We think it is possible to be angry and optimistic at the same time," Diaz said. "We're certainly angry at the result and the things that we did that led to the result, but from what we see in our performance, there are a lot of reasons to still be optimistic — not just optimistic in terms of what's available for us this season, but also optimistic for where we think this program is going."

The improvement of freshman quarterback Jarren Williams has given Miami reason for encouragement. He was sacked 10 times in the opener but bounced back to go 30 for 39 for 309 yards and two touchdowns with no interceptions at North Carolina.

And right now they'll take a victory over anybody.

"It doesn't matter if were playing the Denver Broncos, Alabama or Clemson," tight end Brevin Jordan said. "The whole point is we're trying to win some games."

The Wildcats scored all of their points in the second half to beat Jackson State 36-15 in their season opener. Akevious Williams threw for 144 yards and ran for 53.

Bethune-Cookman's game last Saturday against Southeastern Louisiana was canceled because of Hurricane Dorian.

While the turnover chain is mocked on social media, it had a low profile last week at North Carolina. The Hurricanes had no takeaways, ending their streak of 13 consecutive games with at least one turnover.

Might the much beloved and much reviled bling thing be a bit over the top?

"I don't think it's excessive," defensive lineman Scott Patchan said. "It boosts morale. We just need to get it out now."

The Hurricanes are 11-0 in home openers at the Miami Dolphins' stadium, outscoring opponents 500-69.

But Miami supporters are in a bad mood, and the crowd could turn quickly on the Hurricanes if they get off to a slow start in a game they're expected to win.

"Everything the fans are saying, internally everybody is harder on themselves in this building," Patchan said. "We have to if we want to be great."