Worthy the new Longhorn challenge for No. 12 Oklahoma State 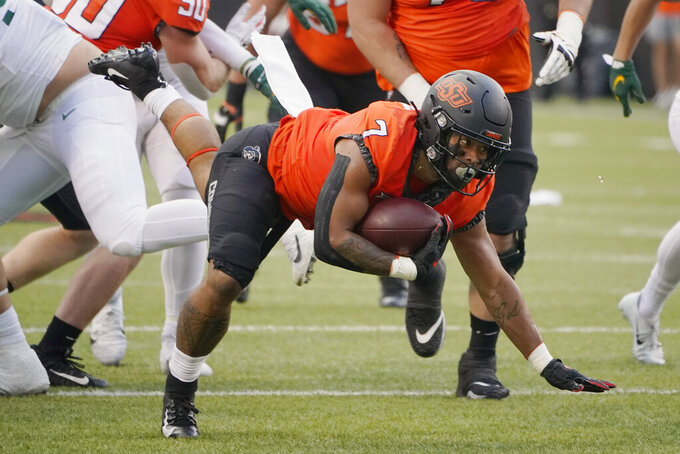 AUSTIN, Texas (AP) — Texas receiver Xavier Worthy had just lost a fumble that cost Texas a lead late in the game against Oklahoma and Longhorns coach Steve Sarkisian was stalking him on the sideline.

The mistake was worth a scolding, and a harsh one at that. Sarkisian greeted his freshman with this instead: “Give me a smile, man, you'll be all right. We're going to come back to you and give you a chance to make that up.”

Worthy did his part, catching two long passes and a touchdown on the next drive that tied the score again. Texas didn't win, but Sarkisian's words in the moment to lift up his freshman rather than bash him for a critical mistake, shows Sarkisian's approach to the game and just how important Worthy has become for the Texas offense.

Worthy, who signed with Texas (4-2, 2-1) out of Fresno, California, said Sarkisian has that sort of easy demeanor with his team in his first season in Austin.

“He does that all the time, he comes at you and smiles,” Worthy said. “When he told me that, I just knew I was going to come back and make a play.”

Worthy has become quarterback Casey Thompson's favorite target and deservedly so. He's shown an ability to not just make tough catches in coverage, but to use the blazing speed in a 6-foot-1, 160-pound frame to be a dynamic playmaker who can fly to the end zone.

His first touchdown against Oklahoma was a short sideline route he turned into a 75-yard score on the game's first play. His second came in the fourth quarter when he got position on a defensive back and shielded him from the ball for the catch at the goal line.

Plays like that will keep opposing defenses from loading up to stop running back Bijan Robinson, the nation's third-leading rusher rusher. Oklahoma State comes in allowing just 91 yards per game on the ground.

“This will be the most athletic team we’ve competed against so far," Oklahoma State coach Mike Gundy said. “I’d prefer to not get in a shootout with them.

Oklahoma State quarterback Spencer Sanders can bedevil opponents with his running when plays break down. He can do the same to his own team with untimely turnovers. Sanders had three against the Longhorns in an overtime loss last season and threw three interceptions in a win over Baylor two weeks ago. His ability to minimize mistakes will be a key factor Saturday.

The Texas offensive line got mauled in the second half against Oklahoma and Sarkisian is making some changes to protect Thompson from an OSU defense that has 16 sacks. Derek Kerstetter moves back to right tackle after one game at left guard, and Junior Angilau moves from left guard from right guard. Tope Imade, typically a reserve, moves to right guard.

Longhorns slot receiver Jordan Whittington (clavicle) and starting defensive tackle Jacoby Jones (foot) are out Saturday after both needed surgery after the Oklahoma game. Whittington has 24 catches for 359 yards and three touchdowns. Jones' absence opens the door for Alfred Collins, a former five-star recruit who is tied for the team sacks lead with two.

Texas scored on its first play from scrimmage against Oklahoma and led 14-0 less than 2 minutes into the game. Oklahoma State has shut out opponents in the first quarter three times this season.