Best of the best: AP ranks the top Games of the Century 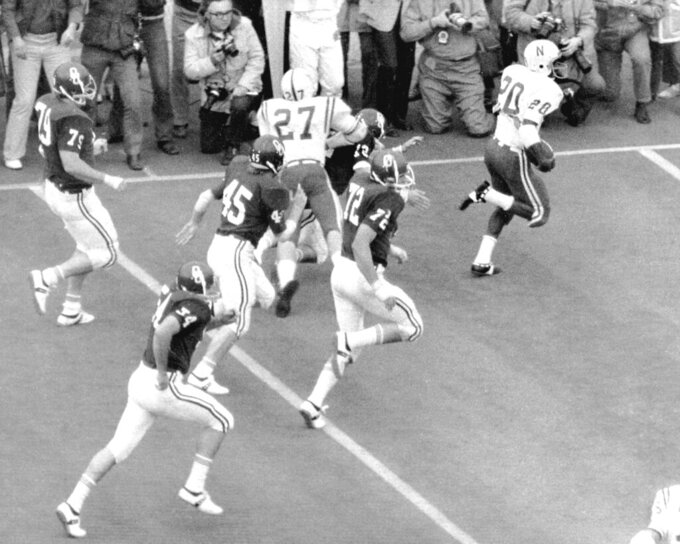 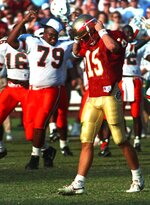 The mere idea of trying to rank the greatest “games of the century” doesn't make sense, which makes it perfect for college football.

The national champion, after all, for decades was determined by educated guess, which meant there could be multiple games deemed once-in-lifetime events played within a span of just a few years.

But the infrequency of games pitting the best in the country made those occasions feel momentous. Finally, a definitive answer to college football's most essential question: Who's No. 1?

“That was the closest thing we had to an actual resolution in college football. Otherwise it was just the polls," said journalist Michael Weinreb, author of “Season of Saturdays: A History of College Football in 14 Games.”

The Bowl Championship Series eventually created a 1 vs. 2 title game to end the season. The College Football Playoff has taken it a step further with a four-team format.

When the CFP inevitably grows again, the Game of the Century will become extinct.

“We were all sort of agitating for this stuff and now that it's here and the sport has become more professionalized, it's still great, but some of that uniqueness is gone,” Weinreb said. “Some of that idea — that these teams were never going to meet otherwise and they just happened to meet during this random season in a random week that elevates this game to something that feels so consequential — just isn't going to be there anymore.”

Motivated by Nebraska and Oklahoma renewing their rivalry on Saturday, 50 years after the Cornhuskers and Sooners played their version of the Game of the Century in 1971, The Associated Press has ranked the best of the best with the help of 33 sports writers and broadcasters.

There were only two qualifiers: The pick had to be a regular-season game and it had to match No. 1 vs. No. 2 in a major poll.

That's why the 2006 Rose Bowl national title game between Texas and Southern California does not make the cut. Vince Young's takedown of the Trojans might be the greatest college football game ever played, but the BCS orchestrated it. A Game of the Century needs to occur organically.

Voters submitted a top five in order. First-place votes were worth five points, four for second and so on. So here it is:

For about two decades, a case could be made that Oklahoma-Nebraska was the most important rivalry in college football. From 1971-88, the Sooners and Cornhuskers played 15 top-five matchups.

This game launched that period of dominance in college football and it still stands as the best of the bunch. Big Eight rivals Nebraska and Oklahoma were 1-2 in the AP poll for seven weeks leading up to their famous Thanksgiving Day showdown.

Cornhuskers star Johnny Rodgers became a legend with his punt return touchdown to start the scoring.

The Huskers and Sooners traded the lead four times over the last 31 minutes, before Jeff Kinney's fourth touchdown gave Nebraska the lead for good with 1:38 left.

Some Games of the Century are marked by controversy during the game or in the aftermath. That's not really the case with '71 Nebraska-Oklahoma, a game that delivered on every bit of its hype.

The Southwest Conference rivals moved to Nos 1 and 2 in the polls after Ohio State was upset by Michigan the week before Thanksgiving, leaving only a couple of weeks of buildup to the season finale between the Longhorns and Razorbacks.

The Longhorns' fourth-quarter comeback led by quarterback James Street erased Arkansas' 14-0 lead and sent Texas unbeaten into the Cotton Bowl, but the event saw just as interesting things off the field.

Texas was the last team with only white players to win a major college football national title.

Known best as Wide Right I.

The game was the first 1-2 matchup between two teams in the same state since Purdue and Notre Dame in 1968, and it marked a shift in the landscape of college football to the Sunshine State.

The Hurricanes and Seminoles didn't have the history to match schools such as Notre Dame, Nebraska and Alabama but they now had the players. The next season, No. 3 Miami beat No. 2 Florida State in Wide Right II. Eventually the Seminoles surpassed the Hurricanes and then the Florida Gators jumped up and won a national title, too.

The game that birthed ESPN's “College GameDay” as we know it. The network decided to bring its pregame show to South Bend to immerse itself in the hype that had been building for a month.

Eventual Heisman Trophy winner Charlie Ward and the Seminoles had been rolling through their schedule like a juggernaut, but the Fighting Irish jumped out to a big lead and then held on for the upset.

The game was a thriller, but what it was how the season played out that makes it so memorable. Notre Dame was upset by Boston College the very next week. Florida State moved back to No. 1 in the polls and went on to beat Nebraska in the Orange Bowl for Bowden's first national championship.

“Still, not sure how ND didn’t get the national title that year,” said Pat Forde of Sports Illustrated.

The Spartans and Fighting Irish spent six weeks holding down the top two spots in the AP poll as the country eagerly awaited the clash of titans.

As the excitement built, fans from all over the country pressured ABC to televise the game nationally, instead of regionally as NCAA rules at the time required. The network gave in.

“I think you can argue that was the moment college football kind of became a nationalized sports and these Games of the Century became something everybody in the country wanted to see,” Weinreb said.

The game itself in East Lansing, Michigan, was a slog, most memorable for Irish coach Ara Parseghian playing it safe at the end without his injured starting quarterback and settling for a tie.

Still, it was an inflection point in the history of the sport during the civil rights movement. Michigan State coach Duffy Daugherty's squad was loaded with star Black players from the South such as Bubba Smith, Gene Washington and Jimmy Raye who were not recruited by the flagship colleges in their home states. Notre Dame had only one black player in 1966, future Hall of Famer Alan Page.

The tie was enough for Notre Dame to hold on to No. 1 and be crowned national champion. Alabama, which also had an undefeated season with a segregated team, finished second in the polls.