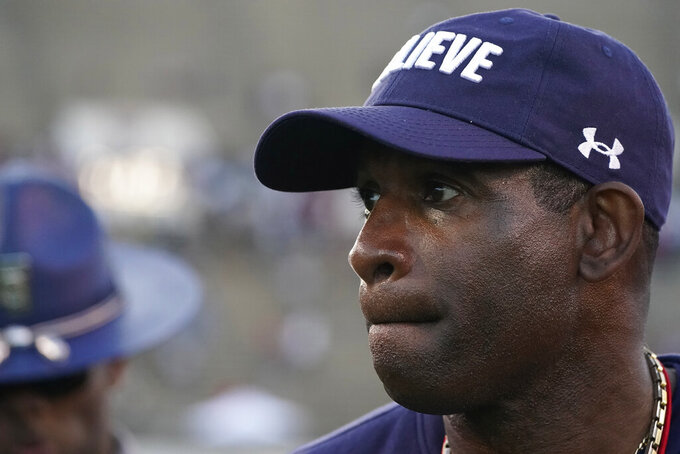 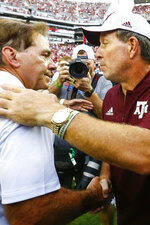 Why did they wait so long to allow college athletes to make a few bucks on the side?

Think of all the wildly entertaining shenanigans we've missed out on over the years.

Jimbo Fisher is downright livid at former boss Nick Saban for saying the Texas A&M coach bought himself the best recruiting class in the country after a free-for-all broke out in college athletics going by the deceptively boring acronym of NIL — Name, Image and Likeness.

During a hastily assembled news conference that checked in at just under 10 minutes Thursday, Fisher called the guy who has won a record seven national titles a “narcissist.” He described the accusations made by the Alabama coach as ”despicable."

“Some people think they're God,” Fisher lashed out. "When you walk on water, I guess it don’t matter.”

And just think — these guys will be on the same field Oct. 8, when Saban's Crimson Tide hosts Fisher's Aggies.

Too bad we can't move that one up to the season opener.

This all started when Saban doubled down on gripes he's been making about the NIL system, which finally allowed college athletes to enjoy the rights of every other American citizen by cashing in on their fame with whatever endorsement deals they can stir up.

While still resisting the more logical step of actually paying those who generate billions in revenue for their ol' college teams, the NCAA surrendered to NIL only because states around the country were starting to pass actual laws that would've allowed it anyway.

Also to be expected: The NCAA caved while providing little guidance on how this new system is supposed to work.

Which brings us to Saban, who was doing quite well under the previous setup that allowed athletes to make zippo for their efforts, at least on the up and up.

Alabama still seems to be doing just fine in this new era of athlete empowerment, which also includes the right to move to another school if you're not happy at your current one via the transfer portal (you know, sort of like coaches can bolt for another job anytime they receive a better offer, which both Saban and Fisher have done).

Saban found himself on the other end of a spat earlier this month when Louisville coach Scott Satterfield suggested that Alabama had tampered with receiver Tyler Harrell before he entered the transfer portal. Harrell has since moved on to the Crimson Tide; Saban, of course, denies any wrongdoing.

So far, nothing has been able to derail Saban's unparalleled dynasty.

But maybe Saban, who has managed to remain the game's greatest coach at age 70 by constantly adapting to whatever changes are thrown his way, senses the slightest of cracks.

The Aggies — coming off a middling 8-4 season that did include a stunning upset of Alabama — landed what some have called the best recruiting class in college football history.

Never mind that Alabama was most folks' pick for the second-best assemblage of recruits. No. 2 is not an option for Saban, who essentially accused Texas A&M of turning NIL into the Aggie Savings & Loan, promising big money to anyone who would sign on the dotted line.

“A&M bought every player on their team -- made a deal for name, image, likeness. We didn’t buy one player, all right?” Saban said during a promotional appearance for something known as the World Games, which is being held in Alabama this summer. "But I don’t know if we’re going to be able to sustain that in the future because more and more people are doing it. It’s tough.”

Travis Hunter, a five-star prospect who had committed to Florida State, instead signed with the Sanders' HBCU program that plays a notch below college football's top division.

“I mean, Jackson State paid a guy $1 million last year that was a really good Division I player to come to the school,” Saban said. “It was in the paper, and they bragged about it. Nobody did anything about it.”

Sanders denied that Hunter received a promise of $1 million in NIL money to play for the Tigers and ripped into Saban for implying that a Black player's decision to play for a historically Black college might be motivated by more than money — especially in light of racial protests that roiled the country just two summers ago.

In an interview with Andscape on Thursday, Sanders said Hunter "ain’t chasing a dollar. Travis is chasing greatness.”

Suffice to say, Saban and Sanders aren't likely to be teaming up with that nutty duck for any more insurance ads.

Of course, Saban vs. Fisher is the main event in this brawl.

Fisher once worked on Saban's staff at LSU, both have national titles on their resume (though Saban has a lot more), and now they're both coaching big-money programs in the same division of the mighty SEC.

Saban is probably making some valid points about the Wild West nature of NIL, but he's not the right guy to be complaining about it.

He has already claimed more national championships than any coach in history. He nearly won another just a few months ago. His program will be just fine. In all likelihood, his jabs at Texas A&M and Jackson State were merely a backhanded way of pressuring his own boosters into plowing even more money into the NIL landscape.

The SEC publicly reprimanded both coaches on Thursday. Saban sort of apologized on his radio show. But the hard feelings won't be wiped away that easily.

In the meantime, all those players who were long denied their right to earn some money on the side must be loving it all.

Two of the nation's highest paid coaches — Saban makes roughly $10 million a year, while Fisher checks in at a reported $7.5 million annually — sniping at each other like jilted lovers.

It's all so amusing.

Paul Newberry is a national sports columnist for The Associated Press. Write to him at pnewberry(at)ap.org or at https://twitter.com/pnewberry1963