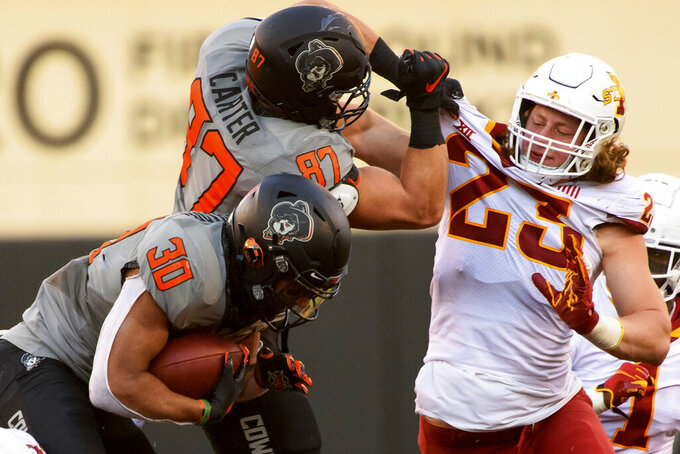 Mike Rose, like everybody else in college football, had no idea last spring if there would be a season.

Iowa State's junior linebacker wanted to be ready just in case, so day in and day out for three months he went to his high school in the Cleveland suburb of Brecksville, Ohio, to do workouts prescribed by the Cyclones' new strength staff.

“I looked at it as an opportunity to get better when some people would get a little complacent being at home," Rose said. "That’s really what fueled me, to do just as much or even more as a normal offseason.”

He's led the Cyclones in tackles three times this season and is tied for second in the Big 12 with 40. He is tied for the conference lead with two interceptions.

“I don’t know if it's a surprise to me at all that Michael is having a phenomenal junior season because the work ethic and the commitment he showed in the dark,” coach Matt Campbell said. “When a lot of people weren’t watching or weren’t thinking they were going to play football, he was preparing to be his best. I think everybody is getting that right now.”

Rose has started all 31 games since he's arrived at Iowa State as a three-star recruit who initially verbally committed to Ball State. He played his first season in Ames at middle linebacker and moved to the strongside last year.

The position change was a big adjustment.

“Freshman year I was an 18-year-old just really running around out there,” he said, “and then last year getting moved to SAM was different. My first two years I felt like it was all going a million miles per hour. This is really the first time in my career it’s really slowed down for me, being in the SAM position for a second year in a row.”

The 6-foot-4, 245-pound Rose has proved to be light on his feet, with both his interceptions coming on tipped balls.

Against TCU, with Iowa State protecting a two-point lead late in the game, Rose dived to snare the ball before it hit the ground after deflecting off the leg of receiver Taye Barber. The Cyclones went on to score a crucial touchdown in a 37-34 win.

Last week at Oklahoma State, safety Greg Eisworth redirected a pass, and Rose caught it in stride along the sideline. That play led to the Cyclones' first touchdown in a 24-21 loss.

When a reporter suggested Rose has soft hands, the linebacker broke out laughing. “I wouldn’t say I've always had soft hands,” he said. “I would credit it to running to the ball and not giving up on a play.”

Eisworth, a fifth-year senior, said Rose flashed potential as a freshman who was playing mostly on instinct.

“He’s one of those guys you ask to do something, he’ll figure out how to do it eventually, and that’s what you're starting to see with him at the SAM linebacker position,” Eisworth said. “He's figuring it out.”

Rose and his teammates did not have the benefit of spring practice, which was canceled because of the coronavirus pandemic. In fact, the players were sent home in mid-March and didn't return until June.

“I was fortunate enough to have a place to work out and do what I needed to do,” Rose said. “I feel what I did in the offseason right now has given me a lot of confidence as a player this year.”