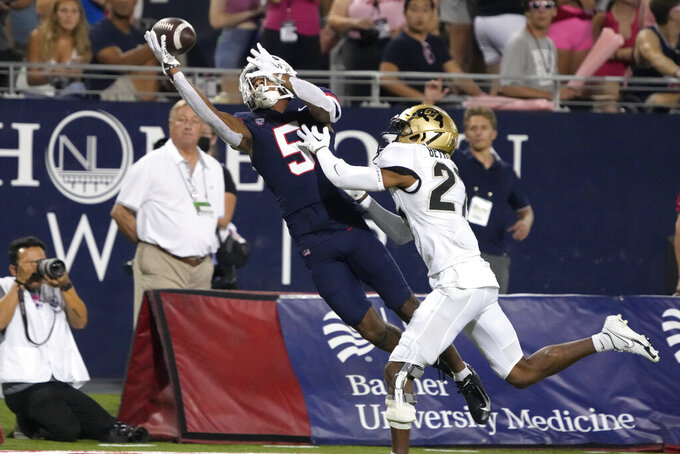 TUCSON, Ariz. (AP) — Jayden de Laura tied a school record for touchdown passes in a game, Dorian Singer and Jacob Cowing were the receiving beneficiaries of that huge passing performance and Arizona enjoyed an easy victory on Saturday night.

It's become obvious that the Wildcats are no longer the doormat in the Pac-12.

Colorado has taken that ignominious honor with another lopsided loss.

De Laura threw for 484 yards and six touchdowns, Cowing caught 12 passes for 180 yards and a touchdown and Arizona dominated from start to finish in a 43-20 victory over winless Colorado.

“The offense was clicking tonight," Arizona coach Jedd Fisch said. “There’s no question about it.”

There were several offensive stars for Arizona, but it was a particularly good night for Singer, who made a pair of highlight-reel catches. The second — a fingertip catch in the back of the end zone for a 5-yard touchdown — gave the Wildcats a 19-7 lead.

“Everything was working,” de Laura said. “All the receivers were catching the ball. I was really happy with the offensive line and their blocking."

Arizona (3-2, 1-1 Pac-12) is halfway to the six wins needed for bowl eligibility, one year after a dismal 1-11 campaign. The Wildcats rolled up 673 yards of total offense.

It was another bad loss for the Buffs (0-5, 0-2), who lost their first four games by at least 25 points and weren't much better against the Wildcats. There were already questions about coach Karl Dorrell's job security coming into Saturday's game and they aren't going away after another stinker, particularly from the defense.

“I'm not ever blaming the players, I'm not going to do that,” Dorrell said. "It's always on us as coaches. We really have paid a lot of attention, trying to do the right things with our people. But it hasn't been the right things.

“We're going to continue to find the right way to do this.”

The Wildcats took a 26-13 lead into halftime. The game could have been even more lopsided but Arizona couldn't convert on a few good opportunities. Among them: Singer's acrobatic one-handed grab for a 47-yard gain early in the second quarter put Arizona on Colorado's 3-yard line, but the Buffs stuffed the next four plays to keep the Wildcats out of the end zone.

De Laura threw for 273 yards and four touchdowns before halftime.

Arizona took an early 7-0 lead with a 75-yard touchdown drive on the opening possession. De Laura hit Michael Wiley for an 8-yard touchdown on the 11th play. Wiley finished with two touchdown catches.

The Buffs came right back with McCown orchestrating a nine-play, 70-yard drive. Colorado got close to the end zone on a 36-yard screen pass that caught Arizona in an all-out blitz and then McCown ran for a 1-yard touchdown on the next play.

Arizona would score the next 19 points and slowly pulled away.

Colorado: The Buffs have some juice on offense with McCown under center, but the defense is a mess. Dorrell is feeling the heat and it'll be interesting to see what changes — if any — are made considering the Buffs don't play again until Oct. 15.

Dorrell said he didn't believe Saturday's loss was his last game with the Buffaloes.

“No, I'm not concerned about that,” Dorrell said. “We've got to keep going, keep finding ways to get these guys to play better. We're going to look at anything and everything."

Arizona: The Wildcats did just about anything they wanted offensively. De Laura — a Washington State transfer — continues to grow in Arizona's offense and the team has a pair of talented receivers in Singer and Cowing.

Colorado: Has two weeks to prepare before hosting California on Oct. 15.

Arizona: Hosts No. 13 Oregon next Saturday.