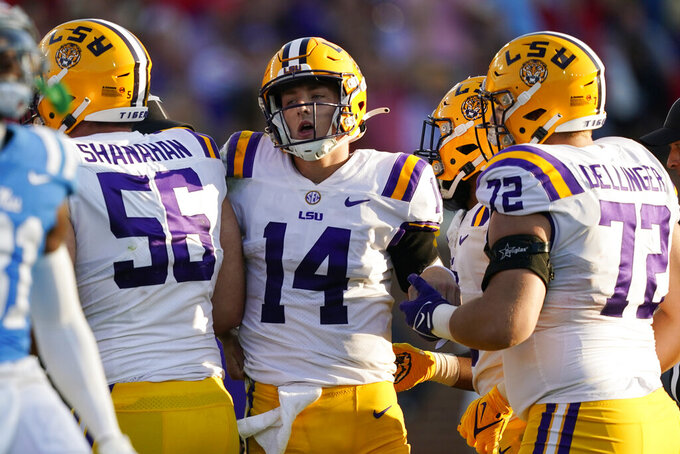 LSU quarterback Max Johnson (14) reacts after being helped up after being sacked by Mississippi players during the second half of an NCAA college football game in Oxford, Miss., Saturday, Oct. 23, 2021. (AP Photo/Rogelio V. Solis)

Much has changed since the last time LSU visited Alabama — for the Tigers, at least.

Nick Saban has the third-ranked Crimson Tide (7-1, 4-1 Southeastern Conference, No. 2 CFP) in national title contention once again and they are led by another Heisman Trophy candidate. For LSU, Ed Orgeron and the Tigers enter Saturday night’s game at Bryant-Denny Stadium trying to salvage his final season in Baton Rouge.

It's nothing like that No. 1 versus No. 2 showdown two years ago when the Tigers (4-4, 2-3) won a tight shootout on their way to a perfect season, a national championship and a Heisman for quarterback Joe Burrow. Last season it was the Tide's turn for the title and the Heisman; and quarterback Bryce Young is the apparent front-runner now.

Orgeron said he couldn’t help thinking to himself before a news conference: “Wow, how things have changed.”

“That was a big victory for us,” he said. “Things are different now, but it’s still LSU-Alabama. My job is to get these guys to play as hard as we can. We’re going to be prepared.”

It's November, and normally that means title pursuit for both teams. That remains true for the Tide.

“You’re remembered for what you do in November; that’s what we say around here," Alabama defensive lineman Phidarian Mathis said. "And so you know, we just got to bring it harder.”

But Orgeron gave ‘Bama some inadvertent bulletin board material after the 46-41 win two years ago, saying that “we’re gonna beat their ass every time they see us” and ending with another profanity. A player live-streamed the speech.

Orgeron apologized then and again this week.

But the loss lingers in Brian Robinson Jr.'s mind and so do Orgeron's words to his team.

“That’s something that we keep lingering,” the Tide tailback said. "We make sure people know just the disrespect that was with that, how it made us feel and everything we have to do to make sure that doesn’t happen again.”

Both teams have running backs who have been hot lately. Alabama's Brian Robinson Jr. is averaging 124.5 yards over the last four games with nine touchdowns. LSU's Tyrion-Davis has scored all six of his touchdowns in the last three games, including a monster 287-yard performance against Florida.

Tre Bradford, who transferred back to LSU from Oklahoma, is ready to make his season debut after overcoming his ailing hamstring. He joins Corey Kiner, along with Armoni Goodwin, who has missed two games with an undisclosed ailment.

“We have to be very solid in the run game,” Orgeron said. “We’re going to need all four of them to play, and we need to rotate those guys to keep them fresh. We can’t get one-dimensional with this team.”

While LSU is as healthy as it has been at certain positions following its bye week, the defensive backfield is not one of them.

Cornerback Eli Ricks (shoulder) is done for the season while Derek Stingley Jr. (foot) is out indefinitely and might not play again before turning pro. In the past few weeks, safeties Major Burns and Sage Ryan have gone down. Orgeron also has termed nickel safety Cordale Flott “very questionable.”

The defenses feature two national leaders at linebacker. Alabama's Will Anderson Jr. is tops with 17 tackles for loss. LSU's Damone Clark leads the nation with 12.2 tackles per game and his 98 tackles ranks second. That includes a career-high 19 tackles in the last game against No. 15 Mississippi.

Kicking woes have come back to haunt Alabama in this rivalry, but both teams appear set in that regard now. Alabama's Will Reichard has made 24 of his last 26 field goal attempts. LSU's Cade York has made 17 of his last 18. Plus his 109 consecutive point after makes ties the school record set by David Browndyke from 1986-89.

LSU's Max Johnson is second in the SEC and 12th nationally with 20 touchdown passes. Alabama's Young is third in the nation with 26 touchdowns.