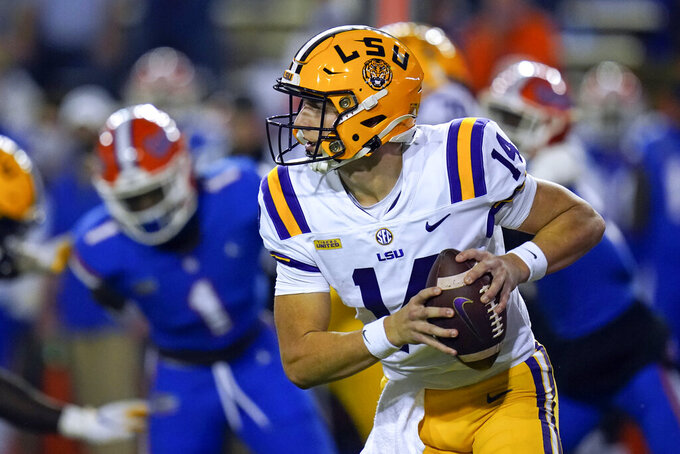 BATON ROUGE, La. (AP) — After a turbulent 2020 that saw LSU narrowly avoid its first losing record since 1999, the Tigers are garnering considerable preseason respect with a No. 16 national ranking in the AP Top 25 Poll.

“We know that we have to be lot better than we were last year," Orgeron said, adding that "there’s a little chip on my shoulder,” and those of his players.

“Last year was not who we are," added Johnson, son of former NFL QB Brad Johnson. "We’re excited about this year.”

After a competitive loss at Texas A&M last November dropped LSU to 3-5 and one loss from a losing season, the Tigers finished with victories over Florida and Mississippi in Johnson's first career starts to go 5-5.

"We’re going to keep on building on what we got going,” Stingley said. “When we’re the best version of ourselves, we’re one of the best in the country.”

LSU has 18 players who started games last season returning, some taking advantage of an extra year of eligibility provided by the NCAA in 2020 because of the COVID-19 pandemic.

They include QB Myles Brennan, who was set to compete with Johnson for a starting job before breaking his left (non-throwing) arm while falling during a fishing trip. If he returns during the season, it'll give LSU enviable depth behind center.

A year ago, the Tigers were hurt because of pandemic-related opt-outs by key players just before and during the season, most notably that of star receiver Ja'Marr Chase.

This year, Orgeron stressed, has been “totally different" and that a “sense of normalcy” has returned.

Numerous veterans “made a decision to come back. We’ve got a great freshmen class,” Orgeron said. "There was a lot of outside influences that caused negativity (in 2020), some stuff we couldn’t control. I think none of that stuff has happened” in 2021.

LSU has one of the top projected cornerback tandems in the nation. This is likely Stingley's final audition for the NFL, and at the other cornerback spot is Eli Ricks, who had four interceptions as a freshman last season.

Stingley has six career interceptions but is looking to bounce back after having none in seven games last season.

Receiver Kayshon Boutte is primed for a big sophomore season after emerging as a top target late in 2020, highlighted by his SEC-record 308 yards and 3 TDs on 14 receptions in the season finale against Ole Miss.

Boutte said he never expected such a breakout performance and isn't about to rest on it.

“To this day, I still don’t really talk about it because it’s still much to improve on," Boutte said. "I was just a freshman. I learned more, got experience. I just got to come back harder.”

Boutte leads a receiver corps that Orgeron has raved about and which includes upperclassmen Jeray Jenkins and Jontre Kirklin, and a few freshmen who were coveted recruits, such as 6-foot-4 Brian Thomas.

LSU has four starters returning on an offensive line that will be responsible for protecting Johnson and opening lanes for experienced running backs John Emery Jr. and Tyrion Davis-Price.

“We all have some playing time up under us, so we all know what to do,” left guard Ed Ingram said. "We’re going to be a dominant force.”

“We have some young coordinators that have never called games before, so they’re energetic,” Orgeron said. "They want to prove themselves.”

LSU opens at UCLA on Sept. 4. Other big games include a visit to Alabama on Nov. 6 and a regular season finale at home against Texas A&M on Nov. 27.