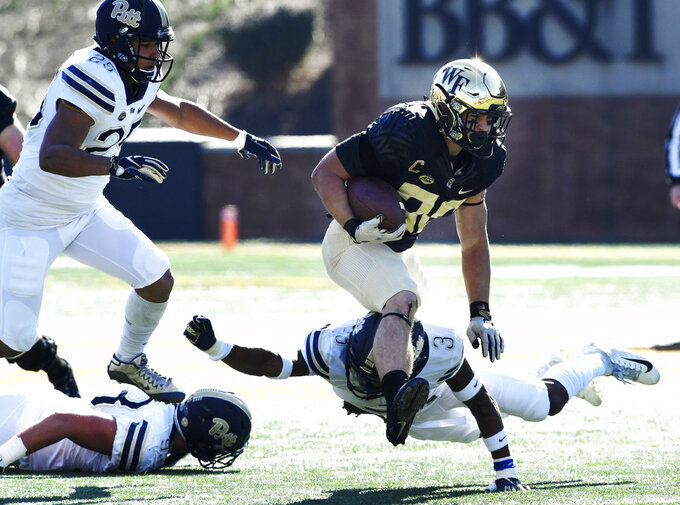 Wake Forest's Cade Carney (36) during the first half of their NCAA college football game against Pittsburgh on Saturday, Nov. 17, 2018 in Winston-Salem, N.C. (AP Photo/Woody Marshall)

WINSTON-SALEM, N.C. (AP) — Coach Pat Narduzzi wasn't worried about a jinx. The Pitt coach had his equipment staff to bring the commemorative ACC caps and T-shirts all the way from Pittsburgh.

It did happen — thanks to Kenny Pickett's career day.

Pickett threw a career-best three touchdown passes, all in the second half, and Pittsburgh beat Wake Forest 34-13 on Saturday to clinch its first berth in the Atlantic Coast Conference championship game.

"Everyone knows this is a special group," Pickett said. "Honestly, we show it every week. We play with the kind of heart and toughness that I don't think is seen very often in this day and age in football."

Pickett finished 23 of 30 for a career-high 316 yards with scoring passes of 4 yards to Rafael Araujo-Jones, 63 yards to Taysir Mack and 23 yards to Maurice Ffrench.

Darrin Hall had a 2-yard touchdown run and left tackle Stefano Millin added a late 6-yard scoring run for the Panthers (7-4, 6-1), who won their fourth straight — their longest winning streak in two years. They will play in their first title game since joining the league in 2013, taking on No. 2 Clemson on Dec. 1 in Charlotte.

As the final seconds ticked away, Narduzzi received a victory bath. Some of the players took turns waving the huge "Pitt" flag in front of the Panthers' fans. And many of them pulled those Coastal Division championship T-shirts over their jerseys and pads.

"We're one step closer to where we want to go," Narduzzi said.

Jamie Newman was 15 of 30 for 206 yards with a 28-yard touchdown pass to Alex Bachman for the Demon Deacons (5-6, 2-5), who must beat Duke next week to qualify for their third straight bowl.

Nick Sciba kicked two field goals, including a 20-yarder with 12:30 to play that made it 20-13. Pickett and the Panthers then methodically went 78 yards in 11 plays and chewed up more than 5 minutes before the sophomore quarterback hit Ffrench on a post pattern for the score with 7:27 left that effectively sealed it.

Pittsburgh: The Panthers climbed the Coastal Division standings with their running game, which ranks second only to Georgia Tech in the ACC with an average of nearly 257 yards. This was only the fourth time this season they were held to fewer than 200 yards rushing, but Pickett proved Pitt can move it through the air, too.

"It's just kind of how the chips fell this week — we had to throw it a little bit, and we made some plays," Pickett said. "We were explosive, like I said we were going to be all year."

Wake Forest: One question hanging over the Demon Deacons centers on coach Dave Clawson's decision to kick two short field goals. Sciba's first kick on the first possession came on fourth-and-inches from the 15, and the second came on a fourth-and-goal from the 2 immediately after Pitt went up 20-10. But the real issue was that, of the Demon Deacons' first five possessions of the second half, four of them were three-and-outs that lasted less than 90 seconds.

"Defensively, we couldn't get off the field," Clawson said. "We ended up getting worn down a little bit. . We didn't make the plays we had to make on offense."

Pitt had a huge advantage in time of possession, finishing at 39 minutes, 31 seconds, while Wake Forest was at 20:29. The Panthers ran 77 offensive plays to a season-low 58 for the Demon Deacons. Pitt had three scoring drives that each exceeded both 10 plays and 5 minutes.

For the second straight year, one of the teams in the ACC title game suffered its only conference loss to the last-place team in its division. The only league team to beat Pitt was cellar-dwelling North Carolina, 38-35 on Sept. 22. Last year, Clemson's lone conference loss came to last-place Syracuse.

Pittsburgh: Finishes the regular season next Saturday at Miami.

Wake Forest: Wraps up the regular season next Saturday at instate rival Duke.