San Diegans left feeling sad as 'The Murph' comes down 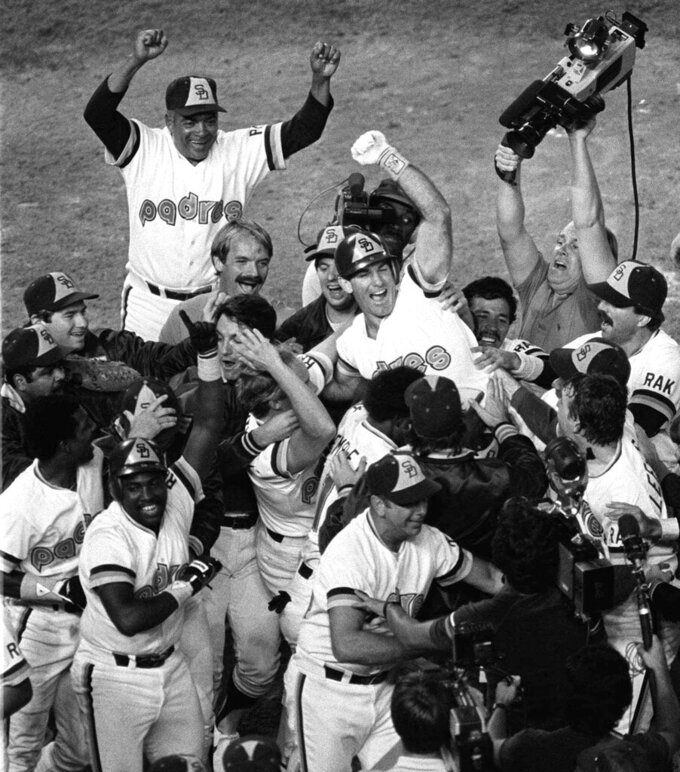 FILE - In this Oct. 6, 1984, file photo, San Diego Padres Steve Garvey, center, is carried triumphantly off the field by his teammates after hitting a game-winning home run in the ninth inning to beat the Chicago Cubs, in Game 4 of the National League Playoffs in San Diego. The biggest piece of San Diego's sports history is slowly being knocked down and ground to bits. Now the stadium is coming to an unceremonious end, leaving generations of fans feeling melancholy because, due to the coronavirus pandemic, they didn't get to say a proper goodbye to the place where they tailgated with gusto in the massive parking lot before cheering on the Chargers, Padres and Aztecs, or watched myriad other events and concerts. (AP Photo/File) 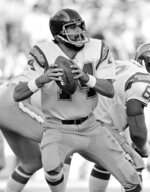 SAN DIEGO (AP) — The biggest piece of San Diego’s sports history is slowly being knocked down and ground to bits.

They’re tearing down the stadium once affectionately known as “The Murph.”

Every day, heavy equipment obliterates more and more of 70,000-seat SDCCU Stadium in Mission Valley, where Hall of Fame careers were born and most of the city’s biggest sports moments occurred.

Tony Gwynn wore out the “5.5 hole” between third base and shortstop and Trevor Hoffman first trotted out of the bullpen to the ominous gongs of “Hells Bells” at the big stadium on Friars Road.

The San Diego Chicken’s brand of fowl humor was hatched there during the rowdy ’70s.

Generations of fans are bummed that, due to the coronavirus pandemic, they didn’t get to say a proper goodbye to the place where they tailgated with gusto in the massive parking lot before cheering on the Chargers, Padres and Aztecs, or watched myriad other events and concerts.

It’s also melancholy for those who performed there.

“We didn’t even have one last house party for the place,” said Ted Giannoulas, 67, who is semi-retired as the San Diego Chicken after a career of making fans laugh by poking fun at umpires, opposing players and his favorite foil, former Los Angeles Dodgers manager Tommy Lasorda.

“To see The Murph being taken apart like that is a letdown, to be polite,” Giannoulas said. “I saw it as the heart of the town, the spirit of San Diego.”

San Diego State University is demolishing the 53-year-old stadium while building a 35,000-seat stadium next door as the first phase of a campus expansion.

SDCCU Stadium had fallen into disrepair and fans knew it eventually would come down. The Chargers pushed for nearly 15 years to get a new stadium built. After a 2016 ballot measure failed, they bolted for Los Angeles. San Diego State prevailed at the ballot box in 2018 to win the right to buy 132 of the site’s 166 acres.

SDSU planned to continue playing at SDCCU Stadium while building its new stadium, set to open in 2022. But when it became clear fans wouldn’t be allowed at games due to the pandemic, the Aztecs decided to play at a suburban Los Angeles MLS stadium and begin tearing down SDCCU Stadium.

The last game there was Iowa’s 49-24 victory over Southern California in the 2019 Holiday Bowl.

Known as San Diego Stadium when it opened in 1967, it was renamed Jack Murphy Stadium in 1981 for the late sports editor of The San Diego Union. Murphy helped persuade hotelier Barron Hilton to move his Chargers from Los Angeles to San Diego in 1961, and then championed the stadium’s construction to replace Balboa Stadium. It was expanded in 1997 and renamed Qualcomm Stadium.

But to many, it will always be known as The Murph.

“Anytime you want to bond with a San Diegan, whether it’s here or anywhere across the country, just say the words, ‘The Murph, what about The Murph,’" Giannoulas said. “The smiles would automatically cross their face, and the happiness, the memories, the joy were just remarkable.”

Giannoulas estimated he performed at the stadium 780 times dating to April 9, 1974, mostly during Padres games and in the climactic scene in “Attack of the Killer Tomatoes!”

The Chicken debuted the same night new Padres owner Ray Kroc of McDonald’s fame addressed the crowd in between innings, saying in part, “I have never seen such stupid ballplaying in my life.” Kroc’s remarks were interrupted by a streaker.

Air Coryell took off in the late 1970s under coach Don Coryell. While there were many big moments, Fouts prefers to remember “just a special team with a bunch of special people and a special coach,” as well as the fans.

He mentions teammates like fellow Hall of Famers Charlie Joiner and Kellen Winslow, as well as Wes Chandler, John Jefferson and Chuck Muncie. “The list goes on and on,” Fouts said. “We knew that when we had to get it done to win at the end of the game, we could reach down deep and then feel the energy of the stadium just carry us down the field at times. It was really, really fun. Plus the weather was always good. I was very fortunate.”

Fouts will never forget the Holy Roller, the controversial game-winning play by Ken Stabler and the Oakland Raiders on Sept. 10, 1978.

“Just how unbelievable it was that the officials would allow an incomplete pass to be ruled a fumble,” Fouts said. “You know it was a bad play because they had to change the rule the next year to straighten it out.”

Hours after the Chargers stunned the Pittsburgh Steelers in the AFC Championship Game on Jan. 15, 1995, to reach their only Super Bowl, they were welcomed home by fans who packed The Murph beyond capacity.

The Chargers owned San Diego. Among the many times the stadium shook were when LaDainian Tomlinson set the NFL’s single-season touchdown record in 2006 and when Darren Sproles scored in overtime to upset Peyton Manning and the Indianapolis Colts in the 2009 playoffs.

Doug Williams became the first Black quarterback to win the Super Bowl when it was played at The Murph in 1988. John Elway finally won his first Super Bowl in 1998 at Qualcomm Stadium.

Steve Garvey’s walk-off homer at The Murph in Game 4 of the NLCS against the Chicago Cubs in 1984 remains one of the Padres’ biggest moments. The Padres won their first pennant the next day. They also reached the World Series in 1998.

Hoffman will never forget the fans dialing up the volume in October 1998.

“That whole month of playoff baseball was just loud,” said Hoffman, inducted into the Hall of Fame in 2018. “The energy started an hour before the game inside of it; a couple of hours in the parking lot before that. Just the energy that I felt in playoff baseball in ’98 was pretty spectacular.”

On July 25, 1998, Hoffman first jogged out of the bullpen to AC/DC’s “Hells Bells,” which over the next 12 seasons became one of the most memorable entrance songs in the majors.

“I kind of remember how it kind of caught the crowd off guard,” he said. “It wasn’t like entrance songs were overly popular at that point in time. ... It certainly over time was really cool, just the anticipation of when I finished my warmup tosses and turned to run onto the field.”

When the Padres moved downtown to Petco Park in 2004, owner John Moores gave Hoffman the pitching rubber from the bullpen.

Roseanne Barr screeched through the national anthem before a Padres game in 1990. SDSU’s Marshall Faulk ran wild for three seasons. Jim McMahon and BYU made the Holiday Bowl a big deal with a miraculous comeback in 1980.

Fans have been able to buy stadium seats for $299 a pair and bid on other memorabilia.

Years ago, when the old multicolored seats were replaced by blue seats, Fouts bought six brown and four orange seats. He has them strategically located on his 40-acre, ridgetop spread in Oregon, “looking out over mountains and forests. It means a great deal to me.”

Does he have any other memorabilia from the stadium?

Those will never go away. The Murph will soon be gone.