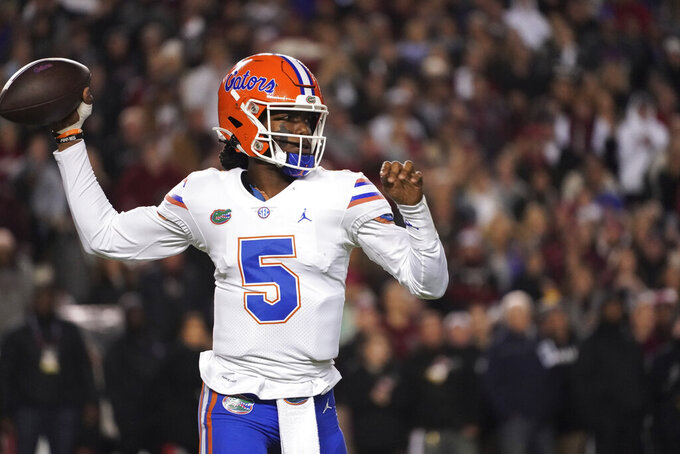 Florida quarterback Emory Jones throws a pass during the first half of the team's NCAA college football game against South Carolina on Saturday, Nov. 6, 2021, in Columbia, S.C. (AP Photo/Sean Rayford)

COLUMBIA, S.C. (AP) — When Shane Beamer accepted the South Carolina job last December, he recalled his days as Steve Spurrier's assistant and the big wins and raucous atmosphere when the Gamecocks were rolling.

The first-year coach got his first true taste of that with Spurrier in the building as the Gamecocks routed Florida 40-17 on Saturday night.

“I remember days and nights like this” when he was here from 2007-2010 as the Gamecocks won their only SEC Eastern Division in that final season, Beamer said.

“We're not there yet,” Beamer cautioned. “We're still a work in progress, but we took a big step tonight.”

A step that few expected out of South Carolina (5-4, 2-4 Southeastern Conference). The Gamecocks were routed at Texas A&M 44-14 two weeks ago and saw its starting quarterback Zeb Noland undergo knee surgery.

Parker White had a career-best four field goals and defensive tackle Jabari Ellis had an 18-yard fumble recovery touchdown to put South Carolina up 30-10 at halftime.

“The fair just left town and I still feel like I’m on a rollercoaster,” Ellis said of following the A&M loss with the biggest win of the season.

Brown became the Gamecocks' third starting passer this season and the FCS transfer made his first Southeastern Conference start an eye-opening one.

Brown, who last played at St. Francis, steadily led South Carolina on five first-half scoring drives for a 30-10 lead at the break.

Brown looked like an SEC veteran as he filled in after grad-assistant coach turned quarterback Noland continued his recovery from knee surgery last week. It's probably not Brown's last start at South Carolina after what he showed in this one.

“Just like that, I was the next guy up,” Brown said. “At this level, there's no excuses, you've got to be ready to play.”

Emory Jones completed 17 of 30 passes for 258 yards and two touchdowns. He also threw an interception and the fumble that went for a score.

Florida coach Dan Mullen said his team has struggled, losing four of the past five and three straight for the first time since 2017.

“You go look throughout the season, there's a lot of little things that have gone wrong,” Mullen said. “We're not doing things that you play winning football at.”

Florida: A Gamecocks win has meant bad things for Gator coaches in the past. In 2014, Florida parted ways with Will Muschamp after a 23-20 overtime loss to South Carolina. Three years later, coach Jim McIElwain had just been dismissed the week before South Carolina's 28-20 victory. Florida hadn't lost three straight under Dan Mullen, who already faced fan unrest for losing three of four coming in.

South Carolina: The Gamecocks have a chance at the postseason, needing to win just once in their final three games to send first-year coach Shane Beamer to a bowl. It won't be easy: They travel to Missouri next week before closing with No. 12 Auburn and Clemson at home.

Mullen said there were up to 30 players missing from practice each day this week due to the flu with Jones testing positive for it Saturday. “I don’t want to make excuses for those guys, but I want to give our guys credit for battling, for facing adversity,” he said.

Spurrier and wife, Jerri, came up for the game to visit with friends they made in his time as South Carolina coach from 2005-2014. Spurrier visited with Shane Beamer on Thursday night and the two saw each other briefly on the field before the game.