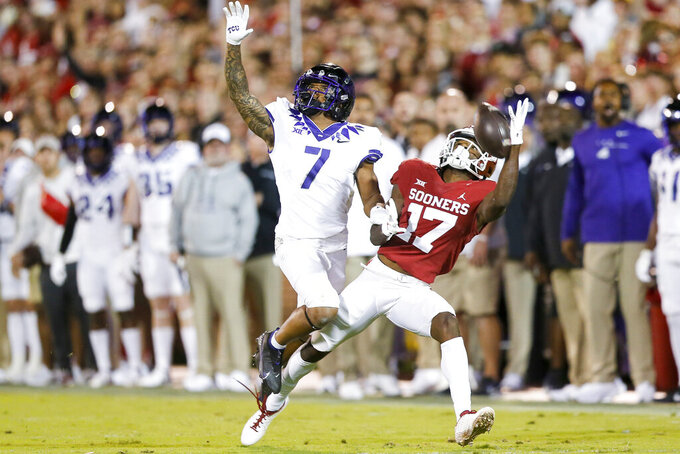 There was a time not long ago when Kansas State fans desperately wanted Gary Patterson to leave Big 12 rival TCU and return to his alma mater to succeed longtime Wildcats coach Bill Snyder.

These days, many Horned Frogs fans would be fine seeing him go.

The heat has steadily built on Patterson in the midst of a fourth straight middling season, where TCU (3-4, 1-3 Big 12) needs to turn things around soon to avoid missing a bowl game for the second time in three years. The defensive-minded coach who made the Horned Frogs into a national power, and led them into the Big 12 a decade ago, has seemingly lost his touch.

In fact, the Horned Frogs head to Kansas State (4-3, 1-3) on Saturday having beaten only Texas Tech — which just fired its coach this week — since season-opening wins over Duquesne and California.

“We need to keep fighting,” TCU wide receiver Taye Barber said after last week's 29-17 loss to West Virginia. "Everybody takes an L sometimes and you have to keep fighting no matter what to win.”

The Wildcats certainly know that feeling.

They started the season with three straight wins, drubbing Stanford along the way, and broke into the Top 25 before they proceeded to lose three straight games. And while the Wildcats mounted a late comeback against Oklahoma State and and gave Oklahoma all it could handle, the lowlight probably came in a noncompetitive loss to Iowa State.

But just as TCU will try to do Saturday, the Wildcats managed to turn things around. They rallied from a 24-10 halftime hole to beat the Red Raiders on the road last weekend, giving coach Chris Klieman's team hope for a strong finish to the season.

“A big win for the program,” Klieman admitted, “but now we have to turn the page and get ready for a really good football team. That's going to be a great ball game here this Saturday, like it's been the last few years.”

TCU and Kansas State have been playing each other since 1922, but they met only sporadically before the Horned Frogs joined the Big 12. The series is deadlocked at seven wins apiece but the Wildcats have won the past two meetings.

“We have played them really tight ball games the last two years and found a way to come away with victories,” Klieman said, “but they could have gone either way. They’re just such a well-coached, physical, athletic team.”

TCU running back Zach Evans caused a stir this week when he removed anything related to TCU from his Instagram profile, leading some to believe he wanted to transfer. But Evans, who is sixth in the league in rushing, was spotted at practice this week and has since added a picture of himself in his No. 6 uniform back to his profile.

CALL IT A CAREER

Horned Frogs wide receiver JD Spielman, the son of Vikings general manager Rick Spielman, decided to retire this week after battling injuries for much of his career. Spielman was among the most prolific pass-catchers in Nebraska history he decided to transfer to TCU, where he had a shoulder injury last season and appeared in just four games this season.

“He’s had a great career at Nebraska and then TCU. He’s been a great teammate,” Patterson said. “He’s been hanging around. He’s been motivational. He’s been all of the above. If I was in his situation, I’m not sure I wouldn’t do the same thing.”

Nobody expected any single player to replace departed Wyatt Huber on the Kansas State defensive line, but sophomore Felix Anudike-Uzomah has come close. He picked up his sixth sack of the season last week against Texas Tech.

Kansas State quarterback Skylar Thompson is coming off his best game since hurting his knee against Southern Illinois in early September. He was 24 of 30 for 296 yards with a touchdown and no interceptions against the Red Raiders.

“I’ve always believed I’ve been able to throw the football. It’s just gaining more confidence, staying in the pocket, and getting through my progressions and all that,” he said. "We could easily have thrown in the towel and given up, but our guys just kept believing. I kept believing. Everybody on our team never wavered and we finally settled in there and made some good plays and came back and won and it was a big, big win for us.”