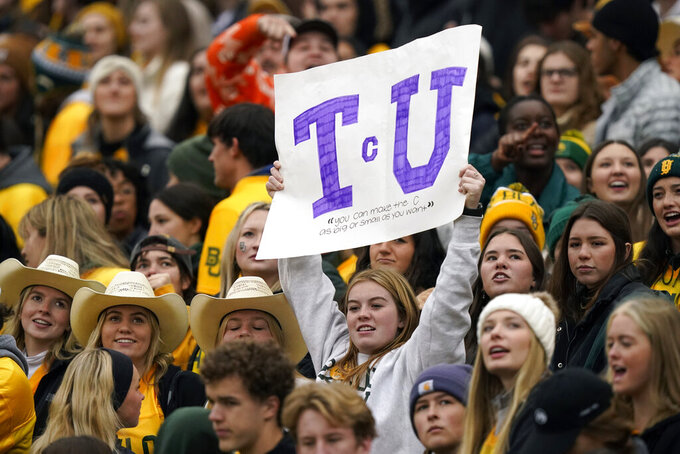 Amongst Baylor fans a lone TCU fan holds up a sign during the first half of an NCAA college football game in Waco, Texas, Saturday, Nov. 19, 2022. (AP Photo/LM Otero)

LITTLE ROCK, Ark. (AP) — TCU offensive coordinator and quarterbacks coach Garrett Riley is the winner of the Broyles Award as the top assistant coach in the nation, the Frank and Barbara Broyles Foundation announced Tuesday.

Riley coached Heisman Trophy finalist Max Duggan and coordinated the top offense in the Big 12. The Horned Frogs, who are 12-1 and in the College Football Playoff for the first time, lead the nation with 19 plays of 50 yards or longer, with 10 going for at least 60 yards.

The younger brother of Southern California coach Lincoln Riley was offensive coordinator at SMU for two seasons before moving with Sonny Dykes to TCU this year. Garrett Riley also has been an assistant at Appalachian State, Kansas and East Carolina.

Riley, 33, was selected as Broyles winner by a committee made up of College Football Hall of Fame coaches, members of the Football Writers Association of America and broadcasters.