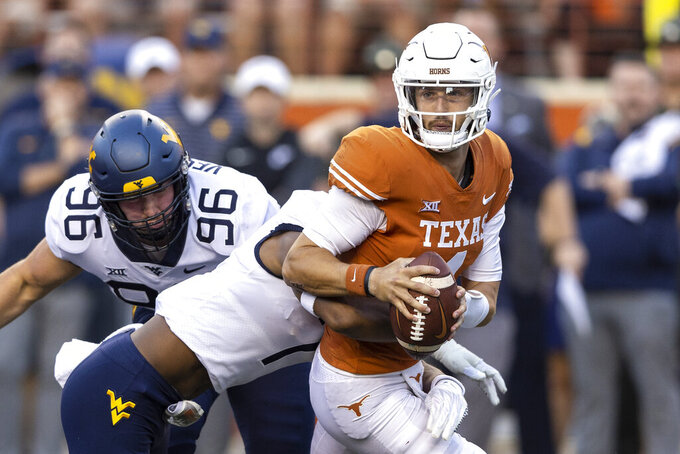 Texas quarterback Hudson Card (1) looks for a receiver as he is pressured by West Virginia defensive lineman Edward Vesterinen (96) and linebacker Jasir Cox during the first half of an NCAA college football game Saturday, Oct. 1, 2022, in Austin, Texas. (AP Photo/Stephen Spillman)

Texas and Oklahoma are preparing for this weekend's annual matchup in Dallas with big questions at the most important position on the field.

Longhorns coach Steve Sarkisian at least has the luxury of two solid options. His decision on who starts revolves around Quinn Ewers, a big-armed freshman who is getting healthier by the day after missing three games with a clavicle injury, and Hudson Card, an experienced backup who is steadily improving each week.

Oklahoma coach Brent Venables, meanwhile, has to prepare his offense for the possibility that starter Dillon Gabriel won't play after taking a hard blow to the head that knocked him out of last week's blowout loss to TCU.

Oklahoma (3-2, 0-2 Big 12) acknowledged after the game that Gabriel was in the team's concussion protocol, but the Sooners offered no updates Monday on his condition. Pitt transfer Davis Beville came on for Gabriel after the injury and could get the start.

Texas (3-2, 1-1) fans are eager to see Ewers return to the field. His slingshot right arm and long, golden mullet hairstyle has been little more than a Texas tease so far. The five-star high school recruit from the Dallas area transferred from Ohio State and won the job over Card, who started the first two games in 2021.

Sarkisian has refused to offer much in the way of updates on Ewers, but the freshman dressed for last week's 38-20 win over West Virginia. With Ewers watching and available to play, Card had a career night with 303 yards passing and three touchdowns.

And while most expect Ewers to return to the field in the Cotton Bowl against Oklahoma. Sarkisian still wouldn't say that Monday.

“My philosophy is pretty simple: Play the guy that I think gives us the best chance to be successful, whether he’s the starter, the backup, the hot hand or not,” Sarkisian said.

The Texas-Oklahoma rivalry in the Cotton Bowl, with its 50-50 split of Longhorns and Sooners fans and wild momentum swings, can be hard on young quarterbacks, or even any player who hasn't experienced it. The bus ride through the massive crowds at the Texas state fair, and the run through the stadium tunnel into the pandemonium inside the walls, can shake the knees of first-timers.

Texas running back Bijan Robinson thinks Ewers can handle it. Ewers didn't seem overwhelmed by the atmosphere of a record crowd of 105,213 when Texas played Alabama, which escaped Austin with a 20-19 win on a field goal in the final minute.

Beville had attempted just two passes in a Sooners uniform before Gabriel got hurt. He was 7 of 16 passing for 50 yards in the 55-24 loss to TCU.

Texas at least has two quarterbacks who grew up in the state and are familiar with the passions that surround the game. Beville may not know what's coming in Dallas.

“Ultimately, it’s gonna fall on myself to make sure whoever’s out there is put in positions of success,” Sooners offensive coordinator Jeff Lebby said Monday. “Create layups for guys and...shoot, again, create a situation where we know what the outcome is going to be before we call the play."