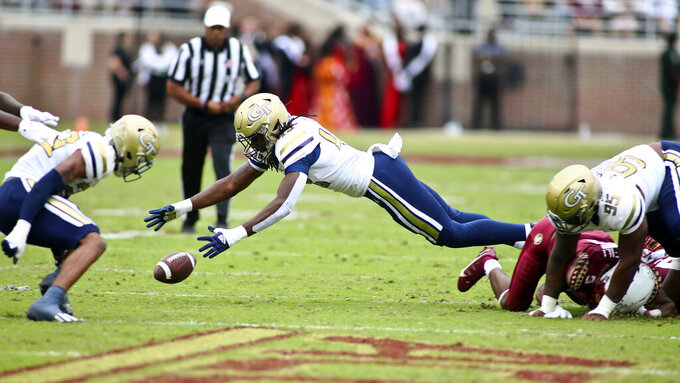 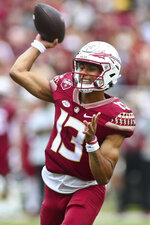 TALLAHASSEE, Fla. (AP) — Florida State fumbled on the goal line and another first-quarter drive deep into Georgia Tech territory was halted on downs. But the Seminoles made the most of their drives in the second quarter and pulled away to defeat Georgia Tech.

Jordan Travis wasn’t sharp at times but still completed 23 of 38 passes for a career-best 396 yards and matched a career best with three touchdowns as Florida State routed the Yellow Jackets 41-16 on Saturday.

“You sit there, and there were so many opportunities throughout that game to really put it away earlier and to play our best,” Florida State coach Mike Norvell said. “I thought there was a lot of great performances.”

Travis connected with Johnny Wilson on a 78-yard TD, Lawrance Toafili on a 62-yard TD and Ja’Khi Douglas on a 24-yard TD as the Seminoles (5-3, 3-3 Atlantic Coast Conference) halted a three-game losing streak.

“We’re used to responding, that’s what coach Norvell emphasizes a lot,” Travis said. "I’m changing my mindset. I’m taking a lot of responsibility from now on. I don’t want to lose another football game this year. My mindset coming in every day is to be the best, have a smile on my face at all times.”

Freshman Zach Pyron completed 18 of 28 passes for 198 yards as well as a TD pass and TD run for Georgia Tech (3-5, 2-3). Pyron took most of the snaps as he filled in for Jeff Sims, who left last week’s game against Virginia with an injury.

Georgia Tech started Zach Gibson at quarterback, and he was 2 of 3 on the first two drives. Georgia Tech interim coach Brent Key said the plan was to use freshman Zach Pyron on the third drive and they decided to stay with him after he settled in.

The Yellow Jackets used an onside kick to open the second half, and they capitalized as Pyron connected with EJ Jenkins on a 32-yard touchdown and cut the Florida State lead to 24-10. But the Yellow Jackets couldn’t score on their next two drives.

Georgia Tech struggled on third downs, going just 2 of 13, and the Yellow Jackets couldn’t stop Florida State, which was 9 of 15 on third downs.

“We got outplayed, offense and defense,” Key said. “Defensively, tough to get off the field on third downs.”

Florida State committed a season-high 13 penalties for 104 yards and Toafili fumbled twice. There were also a number of drops, including Travis’ third-down pass that slipped through Wilson’s fingers in the second half.

“There were things that showed up throughout the game,” Norvell said. “Offensively, had some dropped balls, way too many penalties just as a football team. That’s something that we’ve got to make sure that we maintain our control, our composure, and all things, and executing to the level I know we’re capable of.”

Sims threw some passes pregame but was not able to play. Interim coach Brent Key is not sure if Sims will be able to play in next week’s game.

Florida State defensive tackle Fabien Lovett returned after a five-game absence. He started the game and had one tackle.

Georgia Tech: The Yellow Jackets had just 24 yards on 24 plays in the first half and could not recover while playing a pair of backup quarterbacks.

Florida State: The Seminoles surpassed the 200-yard mark in rushing for a third straight game and controlled the game after a sloppy first quarter to defeat Georgia Tech for the first time since the 2014 ACC championship game.