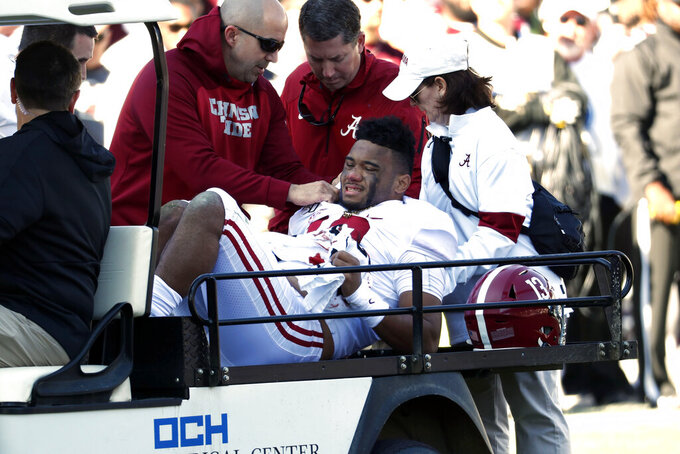 TUSCALOOSA, Ala. (AP) — Alabama’s team surgeon said Tua Tagovailoa’s prognosis was “excellent” after the quarterback underwent surgery to repair a dislocated hip, although there is no timeline for Tagovailoa’s recovery.

Dr. Lyle Cain said Tagovailoa is expected to recover fully after Monday’s surgery in Houston — probably the best possible news the QB could have received about the devastating season-ending injury, which has cast a cloud over his football future.

The 2018 Heisman Trophy runner-up, Tagovailoa emerged as a likely high draft pick — possibly No. 1 overall — with fans of downtrodden NFL teams using the Twitter hashtag “Tankfortua” to show their hopes of getting the QB in the draft.

If Tagovailoa does decide to enter the draft, it’s unclear how the injury will affect how teams evaluate him.

“Our concern is about him getting healthy,” the coach said. “This is going to be a long recovery for him, but we fully expect a full recovery. No one’s really speculating or talking about what’s best for him to do in the future. My only concern is that he can do what’s best for him in his future. I don’t know if right now’s the time to be thinking about that, when you’re thinking about the guy’s health and well-being and recovery.”

Saban pointed out that New York Jets linebacker C.J. Mosley also dislocated a hip in the national championship game to end the 2011 season.

“And he’s come back and had a very successful career,” the coach said. “That’s basically all I can tell you about it.”

Dr. Michael Stover, an orthopedic surgeon at Northwestern Medicine in Chicago, said he has performed similar surgeries on high school athletes and one pro football player, an offensive lineman. He said there’s not enough data to project a timetable on a skill player like Tagovailoa, but he was cautiously optimistic.

“He has a chance to return to sports,” Stover said. “I would be hesitant to say at what level.”

Tagovailoa passed for 7,442 yards and a school-record 87 touchdowns in less than two full seasons as Alabama’s starter. He presided over a remarkable transformation of the once-staid Crimson Tide offense. A five-star recruit from Hawaii, he capped his freshman season by coming off the bench to lead a second-half comeback win over Georgia in the national championship game, throwing the winning touchdown in overtime.

“You are in a much better position today in 2019 to come back from a catastrophic injury than at any other point in history,” McElroy said.

He cited former Notre Dame linebacker Jaylon Smith, another coveted NFL prospect who recovered from a potentially career-ending knee injury and wound up being a second-round draft pick by the Dallas Cowboys in 2016. In August, Smith received a $64 million, five-year extension.

“So much about overcoming an injury is about your attitude, and if there’s one thing I know about Tua, he’s going to have a remarkably positive attitude in the approach to the rehab and everything that’s going to go along with it,” McElroy said.

Positive attitude is one thing people close to Tagovailoa say he has plenty of.

Saban couldn’t say enough about the quarterback’s spirit. The coach said Tagovailoa is a “fabulous person” and one of the four or five players he has cared the most for personally.

Saban said he was feeling down about the injury, but got a pick-me-up from the injured QB.

“This is a guy that has great spirit. He’s very positive about just about everything he does and the effect that he has on other people.”

The Alabama coach and his fifth-ranked Crimson Tide have been coping with the loss of Tagovailoa since Saturday afternoon. Tagovailoa was injured while being dragged down by two Mississippi State defenders late in the first half with Alabama up 35-7.

The injury was a devastating blow to a team that still harbors national championship ambitions.

Mac Jones is taking over Alabama’s offense starting Saturday against Western Carolina. Next up is a visit to No. 16 Auburn. Alabama is fifth in the College Football Playoff rankings, with the latest updates set to be released on Tuesday.

Most of the team’s focus Monday was on Tagovailoa’s health.

Alabama right tackle Jedrick Wills Jr. visited with Tagovailoa before he was flown to Houston.

“I know it’s something terrible for anybody to go through,” Willis said. “But I feel like he's a strong enough person that could come out of this positive and just recover.”

Tagovailoa received visits from teammates and calls of support, including from coach Gus Malzahn of rival Auburn. He shared social media shout-outs from athletes like Kansas City Chiefs quarterback Patrick Mahomes and ex-NFL and Alabama running back Shaun Alexander.

“The emotional impact just around the entire sport was emotionally devastating,” said ESPN’s Laura Rutledge. “Even on Saturday when it happened, I talked to a few college football coaches who said they were so upset even hearing the news.

“One coach told me college football is just not the same without him. I think you just see the respect that he has and how much fun people really do have watching him play. I just think it’s a credit to how he’s handled himself for people to feel that way.”